However, Donald Trump’s decision to ban people from seven Muslim-majority countries – including the one her parents come from – changed that.

“I believe Trump’s latest move is discriminatory, no matter how you look at it”, she tells indy100 in an exclusive interview.

Trump’s Immigration Ban represents in my opinion a step backwards in global progress.

It deprives people from what I think is our most fundamental right — the right to be respected no matter what.

Using water colour paints as her tool, she created a set of illustrations titled ‘An Illustrated Exploration of the #MuslimBan’ in order to unpack and simplify the narrative around the topic: 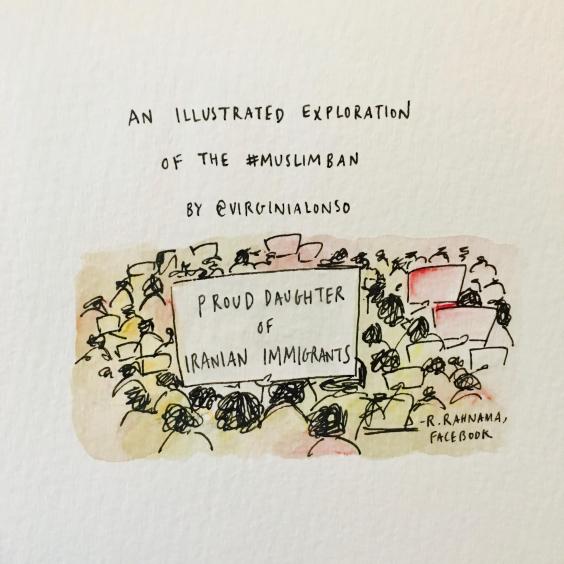 Her labour wasn’t prompted by the ban.

She had started a project – which had over two hundred participants – where she drew people’s answers to questions like ‘what is your main purpose in this moment?’, and ‘what is the last lesson you learnt?’

It later evolved into the finished project, which focussed a great deal on Trump’s executive order.

Seeing the positive feedback I was receiving, I started to think that there was something deeper to this project beyond the simple doodles — people were able to connect better and at a deeper level with each other’s yearnings and objectives, no matter who it was or where they came from 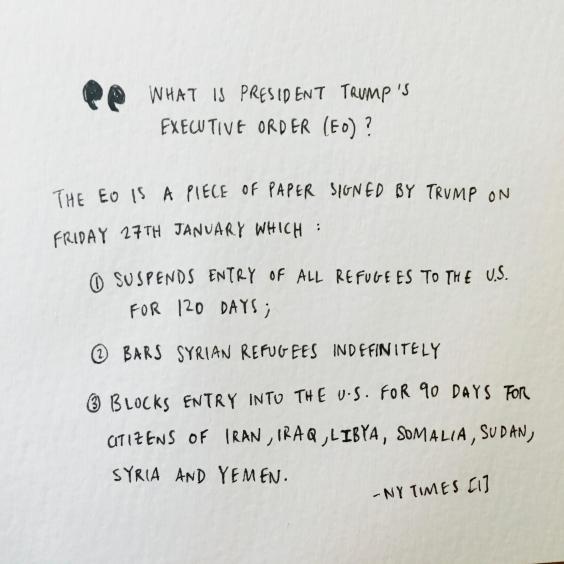 Researching articles and official documents around the topic of the ban, Navarro was able to collate and express the information in a concise manner.

I feel that particularly since Trump took office we have been fed vast amounts of information that leave the future of the country and the world very uncertain.

Navarro acknowledges that the noise in the media can become overwhelming, and make people feel powerless to change anything that happens around them.

I’d like to think that if I can echo what renowned media sources are saying in a visual, accessible format, it will help put all this information across in a way in which people can better empathise and understand what’s going on. 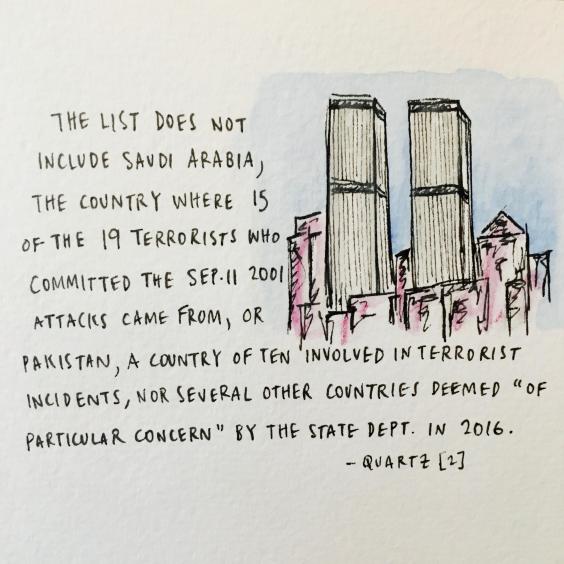 In her illustrations, she referenced a Bloomberg article that pointed out the exclusion of certain countries from the ban – notably where Donald Trump has business ventures: 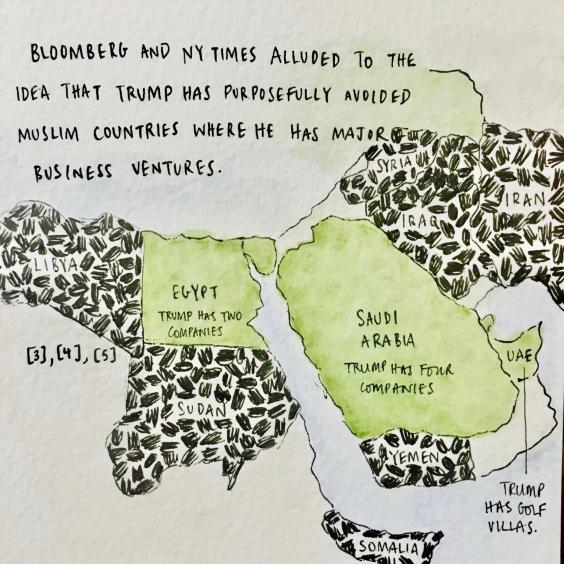 The Trump administration did roll back the ban for dual citizens, but those holding student visas from the seven countries remain in the uncertain zone.

No matter how you look at it – US dual citizens, green card holders, young bright people on student visas, are all being denied entry to their very own lives, or at least humiliated at the border. 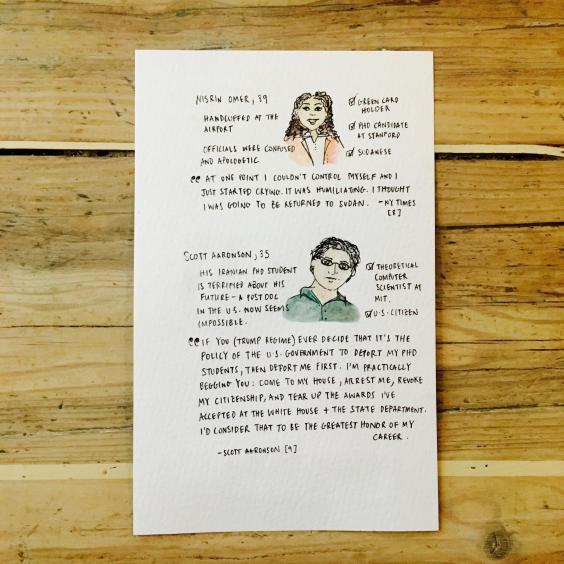 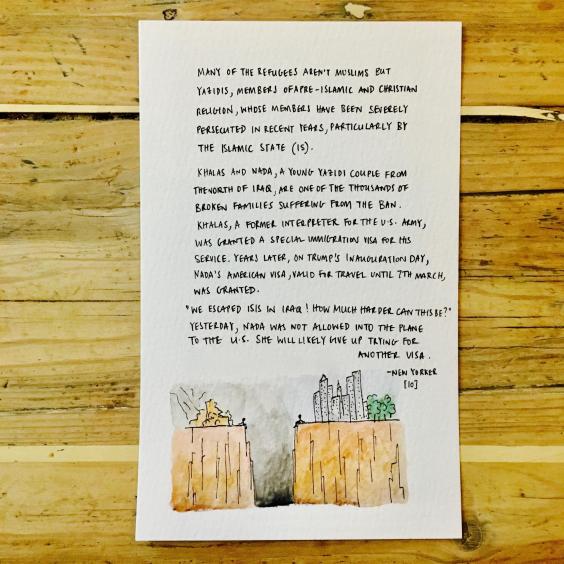 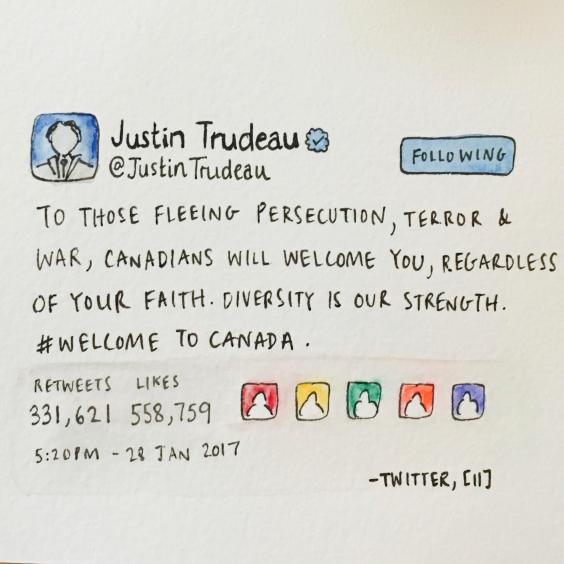 I even feel slightly ridiculous for needing to make that statement – humankind is extraordinary no matter your faith. 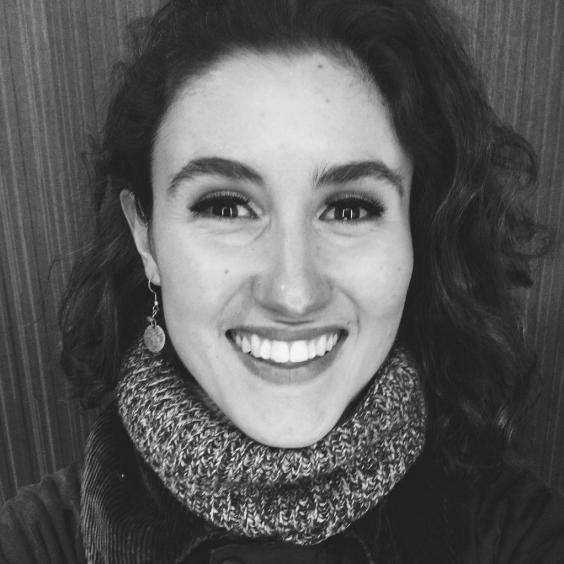 Navarro is currently head of Innovation at AKTEK, a startup that helps leverage technology in conflict and post-conflict areas.

People are very worried by this video of Donald Trump 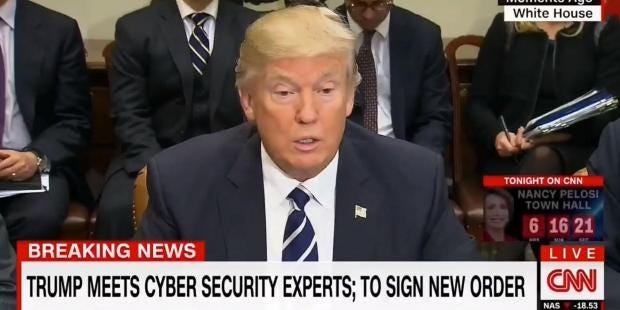 And no, that’s not because of his casual disregard for fact, or his utterly incomprehensible incoherence.

It’s because he could not locate the guy sitting right in front of him.

During a briefing in the White House on cybersecurity, Trump introduced the man he’s chosen to fight the War on Hacking: former New York City Mayor Rudy Giuliani.

But then something weird happened…

Okay, what's up with Trump? Asks "Where's Rudy?" Look where Rudy is. pic.twitter.com/VLZzRkCs63

With that I wanna introduce Rudy Giuliani and he’s gonna be working with Jared Kushner and with Tom Bossert who are also here.

Rudy’s very much of an expert on cyber security: it’s been a very important thing to him, and to what he does and maybe I’ll ask Rudy to say a few words.

He says this sitting across the table from Rudy, directly facing him.

Then he looks around desperately to his left and right, saying:

When the guy on his right (Homeland Security chief General John Kelly) clearly took pity on him and pointed out the obvious, Trump proceeded to swing his big wig back to the left and say:

However, lucidity didn’t seem to return to his eyes (relatively speaking) until a few seconds after Giuliani began talking.

A few ‘haters and losers’ on Twitter have inevitably kicked off with the cracks.