Hate groups nearly tripled from 34 to 101 in 2016, according to a report by the Southern Poverty Law Center, who say the president’s ‘incendiary rhetoric’ is to blame.

The number of hate groups specifically targeting Muslims in the US has nearly tripled in the past year with Islamophobic hate crime soared, according to a new report.

The number of anti-Muslim organisations known to be operating in the country rose from just 34 in 2015 to 101 in 2016, according to the left-leaning non-profit’s Annual Census of Hate Groups and Extremist Organisations.

The total number of hate groups in the United States also rose for a second year in a row, but less steeply—from 892 to 917.

The organisation reported “a rash of crimes targeting Muslims,” including an arson that destroyed a mosque in Victoria, Texas, just hours after the Trump administration announced an executive order suspending travel from seven majority-Muslim countries.

The latest FBI statistics show that hate crimes against Muslims grew by 67 percent in 2015, the year in which Mr Trump launched his campaign.

The survey, contained in the spring 2017 issue of the SPLC’s Intelligence Report, includes a ‘Hate Map’ showing the names, types and locations of hate groups across the country. 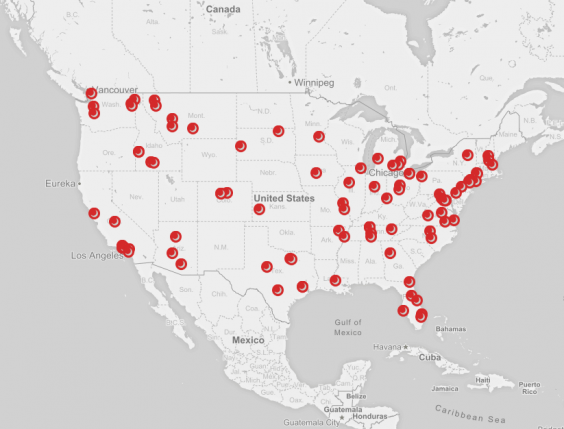 It shows a cluster of anti-Muslim groups on the East Coast, and dozens of others dotted across the US.

“2016 was an unprecedented year for hate,” said Mark Potok, senior fellow and editor of the Intelligence Report.

“The country saw a resurgence of white nationalism that imperils the racial progress we’ve made, along with the rise of a president whose policies reflect the values of white nationalists. In Steve Bannon, these extremists think they finally have an ally who has the president’s ear.”

The SPLC added they believe Mr Trump’s “incendiary rhetoric”, including his campaign pledge to ban Muslims from entering the United States, had combined with anger over terrorist attacks, such as the June massacre of 49 people in a gay nightclub in Orlando, to fuel the rise in anti-Muslim hate.

“Trump’s run for office electrified the radical right, which saw in him a champion of the idea that America is fundamentally a white man’s country,” said Mr Potok, citing as part of the problem the appointment to senior posts of retired general Mike Flynn, who has described Islam as a “malignant cancer” and tweeted that “[f]ear of Muslims is RATIONAL”, and Mike Pompeo who is close to some of the country’s “most rabid anti-Muslim extremists”.

The researchers added that the recorded number of hate groups probably understated the actual level of organised hatred in America, as a growing number of extremists operate mainly online and are not formally affiliated with hate groups.

Although the FBI have not yet released statistics for hate crimes against Muslims for 2016, the SPLC said they had measured an increase in other ways.

In the first 10 days after Mr Trump’s election, the SPLC documented 867 bias-related incidents, including more than 300 that targeted immigrants or Muslims.

In a post-election SPLC survey of 10,000 educators, 90 per cent said the climate at their schools had been negatively affected by the Trump campaign.

“Eighty per cent described heightened anxiety and fear among students, particularly immigrants, Muslims and African Americans,” the organisation said. “Numerous teachers reported the use of slurs, derogatory language and extremist symbols in their classrooms.”

Mr Trump has denounced some racist groups, but been evasive when asked to call out others. At a meeting with the New York Times in November he said: “If they are energised, I want to look into it and find out why.”

Asked at a news conference on Wednesday about a spike in anti-Semitic threats, Mr Trump told reporters: “We are going to do everything within our power to stop long-simmering racism and every other thing that’s going on.

“I think one of the reasons that I won the election is because we have a very, very divided nation,” the president added. “Very divided, and hopefully, I’ll be able to do something about that.”