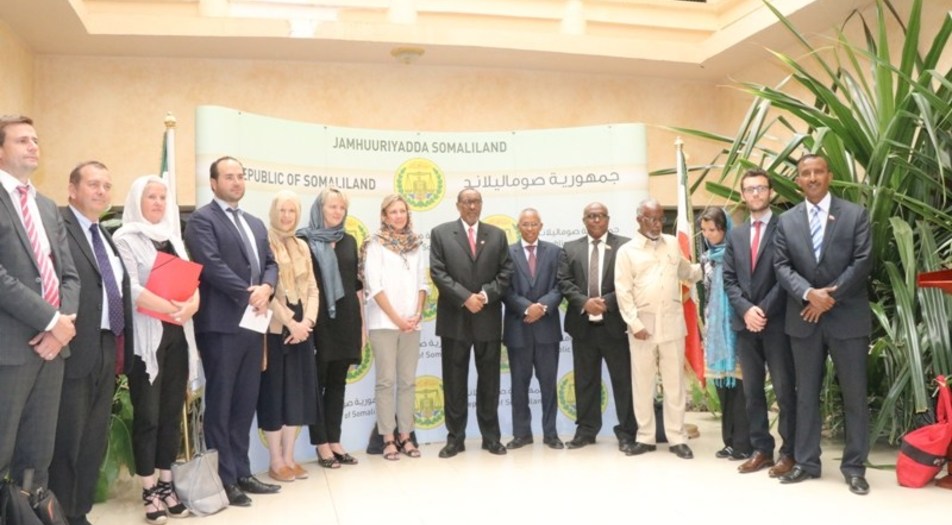 During the visit, the delegation met His Excellency, the President of Somaliland, the National Electoral Commission (NEC) and the three presidential candidates. The visitors made clear their support for transparent and inclusive elections on 13 November 2017 and encouraged all candidates to accept the outcome of a credible process.

International partners noted that election preparations led by the NEC were progressing well. The compilation of a voter register and distribution of voter cards, certification of Presidential and Vice Presidential candidates and the Presidential decrees of 30 September 2017, are critical milestones that have been achieved.

Implementation of these decrees and of the agreed Code of Conduct for Political Parties is essential, including equal access for all political parties to the media.

Five weeks ahead of the election, the delegation encouraged the political parties, the NEC, and civil society to continue working towards peaceful, inclusive and transparent Presidential elections.

Today, we called on our Somaliland friends to respect the established legal frameworks and procedures, abide by decisions made by the legally mandated institutions and adhere to commitments undertaken.

The delegation welcomed the steps taken to ensure a smooth election and encouraged all Somalilanders to pursue any grievances through legally established electoral complaints mechanisms. It is essential that political parties campaign responsibly and on a level playing field, without intimidation or harassment and with equal access to state media.

The role of civil society and the media in enabling voters to make an informed choice, scrutinizing the policies of presidential candidates and holding political parties and Somaliland’s institutions accountable for commitments made is important.

In particular, accredited by the NEC, election observers can help reinforce confidence in the integrity of the process. The civil society will mobilize some 620 domestic observers alongside 60 independent and experienced international monitors.

International partners to Somaliland noted that peaceful, credible and transparent Presidential elections on 13 November, conducted openly and accepted by all parties, and followed as soon as possible by parliamentary and local elections, will demonstrate the maturity of the democratization process in Somaliland.

They should lay the foundation for continued socio-economic progress for the benefit of all Somalilanders. The international partners of Somaliland will continue to support and follow closely the preparations and conduct of the Presidential elections.

The UK inSomalia mission, in relation to the visit, posts:

Representatives of the EU, Denmark, Finland, France, the Netherlands and the UK visited Hargeisa yesterday to show their support for free and fair elections in Somaliland. The delegation noted that preparations for the November Somaliland elections were on track and encouraged all candidates to accept the outcome of a credible process. President Silanyo made clear to the visitors his determination to ensure a level playing field.

Rosie Tapper, Head of the British Office in Hargeisa, said the presidential decree of 30 September showed a ‘concrete commitment to credible elections. Today we encouraged implementation, including on equal access to the media for the three political parties’. The delegation also noted that over 600 domestic observers should complement international monitors in reinforcing confidence in the election and encouraged all Somalilanders to pursue any grievances through established legal and mediation channels. By staging peaceful, transparent and inclusive elections on 13 November, Somaliland had an opportunity to reaffirm its commitment to democracy.