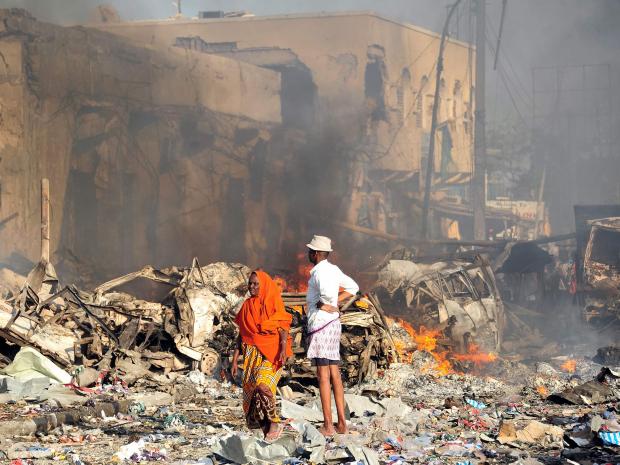 Somalians are calling the twin truck bombing—one of the world’s deadliest attacks in years—their 9/11, but the assault has drawn little global attention compared to extremist attacks in the U.S. and Europe.

Hashtags like #PrayForSomalia and #IAmMogadishu, referring to the eastern African country’s capital where more than 300 were killed, failed to trend on social media.

Facebook did not promote a Somalian flag profile picture filter like the French flag overlay that more than 120 million people used in the first three days after the November 2015 terrorist attack at Paris’ Bataclan theater. And in the first two days after the January 2015 attack on the French publication Charlie Hebdo in Paris, #JeSuisCharlie was used more than 3 million times on Twitter and became one of the most popular hashtags in the social network’s history.

Some people took to social media to voice their discontent over the lacking spotlight on the deadliest attack in the Somalia’s history, one that also injured nearly 400 more people and left scores missing.

Khaled Beydoun, an associate professor at the University of Detroit Mercy School of Law, in a Facebook post on Sunday said, “I hate comparing human tragedies,” but added that 10 times more people were killed in Somalia than in the terrorist attack at Britain’s Manchester Arena in May.

“We get it—white and Western, European and American victims ‘merit’ the media attention and the public alarm it spurs, and Black and foreign, African and Muslims do not,” Beydoun wrote.

Beydoun and others not only criticized a lackluster response on social media, but also mainstream media for what they perceived as a western bias.

Poor brown folks who live in a country that doesnt offer anything to western countries are worthless to the eyes of media. #IAmMogadishu

Itayi Viriri, spokesman for the International Organization for Migration, called out social media networks and celebrities. “Why aren’t we all with Somalia today? @Facebook? @Twitter? #Celebs? Anyone?” he tweeted on Monday.

As officials on Wednesday released a detailed account of the bombings, thousands of Somalians, mostly young men and women wearing red headbands, took the streets of Mogadishu to show defiance. They rallied as Mayor Thabit Abdi said, “we must liberate this city which is awash with graves,” the Associated Press reported.

But another barrier to their protest reaching an international audience is that Somalia was among the last countries in the world to gain access to the internet, and usage remains rather low.

Somalia isn’t the only place that has felt forgotten. Dozens of people lost their lives in a double suicide attack in Beirut, Lebanon, in November 2015, only to be overshadowed by the scores who died a day later in the terrorist attack in Paris’ Bataclan concert hall.

The Somalian government has pinned the assault to the extremist group al-Shabab, which targeted Mogadishu in the past but has not commented on Saturday’s bombings.

The U.S. sent a military plane into Mogadishu just three days after the bombings with medical aid and humanitarian supplies, but that drew little attention or support from Americans, who studies show believe foreign aid is already too high and prefer investment domestically.

WHY THE SOMALIA TRUCK BOMB MATTERS FOR PRESIDENT TRUMP

Leveled buildings. The smoking shells of vehicles. Body parts charred and scattered around the blast radius.

The images from Saturday’s bombing in Mogadishu are familiar to observers of Somalia, which has been mired in conflict since the early 1990s. But Somalis say there was something different about the attack that killed at least 320 people, with the death toll likely to rise.

A truck packed with hundreds of kilograms of explosives detonated in a traffic jam outside the Safari Hotel in Mogadishu. The Somali National University is nearby, as is the Ministry of Foreign Affairs, the presumed target of the blast. A second smaller bomb also detonated nearby, according to some accounts.

A Somali man next to a dead body on the site where a car bomb exploded at the center of Mogadishu, Somalia, on October 14. MOHAMED ABDIWAHAB/AFP/GETTY

“The bomb went off in the middle of one of the busiest intersections in the city. If you think about New York City, it’s like Times Square,” says Abdirashid Hashi, the director of the Heritage Institute—Somalia’s first independent think tank—who is based in Mogadishu but was not in the city when the explosion occurred.

While Somalis mourn and bury their dead, the attack has cast fresh scrutiny on U.S. efforts to eradicate Al-Shabab—an Al-Qaeda affiliate based in Somalia that is presumed to be behind the bombing.

U.S. officials in Somalia said their efforts would be redoubled after the explosion. “Such cowardly attacks reinvigorate the commitment of the United States to assist our Somali and African Union partners to combat the scourge of terrorism to promote stability and prosperity for the Somali people and their regional neighbors,” said a statement from the U.S. Mission to Somalia.

A Pentagon spokesperson signaled that Washington may be willing to accommodate requests for extra resources from the government in Mogadishu. There are already400 U.S. troops on the ground in Somalia.

The Trump administration has taken several steps to aid U.S. efforts against Al-Shabab, which have been ongoing for at least a decade. But Saturday’s bombing is likely to raise questions about whether a strategy that consists largely of pinpoint strikes against key militant leaders is effective against a jihadi group that has once again proved its capacity for large-scale killing.

Recruits belonging to Somalia’s Al-Qaeda-linked Al-Shabab militant group march during a parade at a military training base in Afgoye, Somalia, on February 17, 2011. FEISAL OMAR/REUTERS

Washington’s campaign against Al-Shabab has been running since 2007, when the militant group was spawned by a union of Sharia courts that briefly controlled Mogadishu. At least 52 U.S. airstrikes have been confirmed in Somalia since then, according to the Bureau of Investigative Journalism, which tracks U.S. military involvement in Somalia.

There have been a handful of unconfirmed ground operations, but U.S. involvement has largely been limited to precision strikes. The reluctance to put boots on the ground in Somalia may be a product of American history in the Horn of Africa state. Mogadishu was the site of an infamous battle in 1993, when 19 U.S. servicemen were killed in a botched attempt to capture a Somali warlord. Former President Bill Clinton ordered U.S. troops out of Somalia within six months after the battle.

The scale of Saturday’s attack—which has been described as the worst in Somalia’s history—could be a “turning point” for U.S. public perception of the deadliness of Al-Shabab, says Jason Warner, director of the Africa profile at the Combating Terrorism Center at West Point, the U.S. military academy. The Trump administration has made fighting militant violence its top priority in Africa, and Warner says that what is being described as Somalia’s 9/11 could precipitate more resources going to Somalia.

“My take is that the U.S. will continue its serious efforts to degrade Al-Shabab in light of the attacks and that, indeed, deeper involvement could be likely,” says Warner.

A woman cheers with a Somali flag during a Seattle protest held in response to President Donald Trump’s travel ban on January 29. Somalia is one of the countries targeted by Trump’s travel ban. DAVID RYDER/REUTERS

The United States has had some notable successes in its mission against Al-Shabab. In 2014, the Pentagon said it had killed Ahmed Abdi Godane —the group’s co-founder and then leader—in an airstrike in Somalia. More recently, U.S. Africa Command confirmed in July that it had killed Ali Jabal, a senior Al-Shabab commander responsible for overseeing the militants’ operations in and around Mogadishu.

But frustrations have been expressed at the inability to definitively neutralize Al-Shabab, including the efforts by the Trump administration: A leaked set of questions from the Trump transition team to the State Department, reported by The New York Times in January, included this query: “We’ve been fighting Al-Shabab for a decade, why haven’t we won?”

Tricia Bacon, a former counterterrorism analyst for 10 years at the State Department, says that despite its status as an Al-Qaeda affiliate, Al-Shabab is more comparable in its modus operandi to the Taliban in Afghanistan. Both groups are capable of launching major attacks in urban centers, like Mogadishu or Afghanistan’s Kabul, but are also deeply embedded within their respective populations. Al-Shabab functions as a sort of substitute state in rural parts of southern Somalia, where the Mogadishu government cannot yet reach.

So long as Washington is focused on a purely military strategy in Somalia, there will be only limited gains against Al-Shabab, says Bacon, an assistant professor at American University in Washington. “The things that are needed to degrade Al-Shabab is the kind of institution building that has been really difficult in Somalia,” she says. “If there’s not a viable alternative [to Al-Shabab], defeating the organization militarily is not really possible.”

While U.S. strikes have taken out key leaders and Al-Shabab has been deprived of its urban hubs, the group has reverted to guerrilla warfare in Mogadishu in recent months. But it has also shown a significant capacity for major raids. Al-Shabab has overrun the African Union Mission in Somalia and Somali military bases on multiple occasions in recent years, seizing weapons and causing mass casualties. In January 2016, militants killed up to 200 Kenyan troops in a raid on a military base near to the Kenyan border, according to Somalia’s ex-president, Hassan Sheikh Mohamud.

Kenyan soldiers mourn their comrades, killed in an Al-Shabab attack on their base in El Adde, Somalia, at a memorial service in Eldoret, Kenya, on January 27, 2016.TONY KARUMBA/AFP/GETTY IMAGES

Somalia’s current head of state, President Mohamed Abdullahi Farmajo, has used both carrot and stick in his bid to tackle the jihadis. Farmajo declared a state of war with Al-Shabab in April but also offered amnesty to militants. The government was boosted when Mukhtar Robow—a founding member of Al-Shabab—surrendered in August. Robow was pictured donating blood for victims in the aftermath of Saturday’s attack.

But the failure to contain Al-Shabab is also being drawn into sharp relief by the fact that a 22,000-strong African Union force known as AMISOM—which has been leading the ground fight against the militants—is due to start winding down in 2018. Omar Mahmood, a Somalia expert at the Institute for Security Studies, an African security think tank, says that an Al-Shabab revival is a strong possibility should AMISOM pull out as planned.

“Al-Shabab already immediately occupies towns once security forces pull out, which demonstrates their presence nearby (i.e., they were dislodged but not defeated),” he tells Newsweek via email. “Barring the sudden development of a Somali National Army which could take its place, there will be little to prevent Al-Shabab from making substantial gains [when AMISOM pulls out].”

Even before Saturday’s blast, it appeared at least tangentially that Trump was aware of the gravity of the threat posed by Al-Shabab. The president declared parts of Somalia an “area of active hostilities” in March, loosening restrictions for U.S. strikes on the militants. Trump also authorized the deployment of regular U.S. troops to Somalia in April, the first time they have been sent there since the “Black Hawk down” battle in 1993.

U.S. Marines disembark from a landing craft onto a beach in Mogadishu, Somalia, on December 9, 1992. U.S. personnel were deployed as part of a humanitarian mission after Somalia collapsed into chaos following the overthrow of President Siad Barre. ERIC FEFERBERG/AFP/GETTY IMAGES

U.S. officials insist that American troops are not on the front line against Al-Shabab but are largely engaged in training and assisting Somalia’s military, which has been decimated by decades of civil war and clan infighting. According to Hashi, the Mogadishu-based analyst, rebuilding the country’s own security apparatus to be “effective, professional, inclusive [and] well trained” is the only way to bring Al-Shabab’s insurgency to a final end.