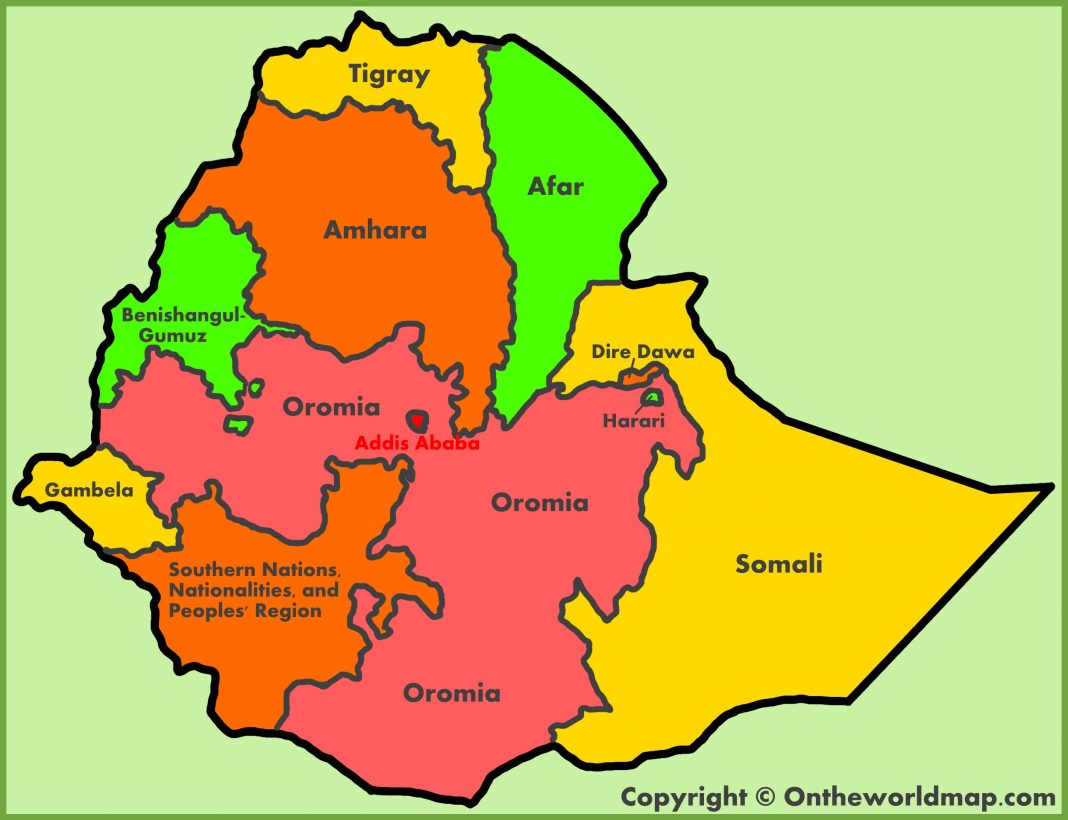 Even though the creation of the Ethiopian People’s Revolutionary Democratic Front (EPRDF) predates the downfall of the Derg, its origin, evolution, structure and power-sharing arrangements are virtually unknown to the general public. My intention here is not to discuss these things, but to simply point out that this coalition, from all outward manifestations, and from what has transpired in various media outlets in the course of 26 and plus years, has never been and was indeed never designed to be – regardless all protestations to the contrary – a partnership between equals. It may be true that no coalition is indeed a partnership of equals. Not even in the most democratic countries. But to determine that since this is a fact we should not raise any objection to the inequality that has shaped the relationship between the four parties constituting the EPRDF would be a facile generalization.

To begin with, modern democracies follow the rule of proportional representation, and power sharing is directly or indirectly based upon this rule. In other words, the party who has the majority of votes in an election is the one considered to be the majoritarian party. Thus the government is formed on the principle that the party owning the majority of votes has the precedence over all other parties to form a government. And if it does not have the numerical requirements to form a government alone, it usually seeks to form a coalition government by joining with one or more minority parties.  This obviously is not the case with the EPRDF. It has always been evident that power was not shared on the basis of proportional representation, but simply on the basis of who possessed more military power. It was assumed and expected that the party that contributed the most to the downfall of the Derg would inevitably wield most of the power. And it appears that this has not been challenged sufficiently and consistently. When the OLF left the coalition, or more precisely the transitional government, in 1992 it did so because it perceived justifiably that the coalition was clearly not a partnership of equals, and it therefore did not want to accept a subordinate position. On the other hand, the parties which have agreed to stay or join the coalition have accepted implicitly or explicitly this arrangement.

The EPRDF’s coalition, as is evident, is anomalous from both the historical and political perspectives. Once its design to constitute a regional state led nowhere, it re-purposed its force, as we all know, to overthrowing the Derg. When this was achieved, the whole transitional period was really more an attempt at giving an impression of a legitimate process rather than a genuine commitment to the rule of law and democratic process. We all knew that the party with more military power would have eventually taken the lion’s share in the forming of the government. There are even those who thought that this was a fair natural outcome, and even felt and stated that those who fought the most needed to be rewarded the most, and that the rest should be grateful to be invited at the negotiating table. But, as I will state further, this was a fundamentally flawed and dangerous attitude. The TPLF being the party which presumably contributed the most in bringing about such momentous change, knew from the outset that it could not run the country without some semblance of cooperation with the other “liberation” parties. And where there were no parties to stand for minority population it quickly provided them with one, often heading them by one of its own TPLF cadres.

The absurdity of this coalition is that a minoritarian party, in the sense that it represents a minority population, sought coalition with majoritarian parties, again in the sense that they represent majority populations, to form a so called federal government having jurisdiction over the entire country. When seen from this perspective, the whole arrangement is not only odd, but could not have been maintained for nearly a quarter of a century without a great dose of Machiavellian machinations, fear mongering and the sawing of discord among the various ethnic groups. And in this the TPLF has succeeded beyond its wildest dreams.

In reality, the TPLF could have never sought, and indeed never did seek, a legitimacy based on a majority of votes. Let’s first of all not forget that it was, and has remained in a way, an armed guerilla front whose primary aim was to liberate and establish a regional autonomous state. Even when it sought some form of legitimacy, it never ceased to be what its founders wanted it to be, and thus it remained committed primarily to its ethnic base. What has changed in reality is that it moved from the goal of establishing an autonomous state to seeking the advantage of its ethnic base in every conceivable way. And in this it has succeeded spectacularly thanks to the connivance of its subordinate coalition partners. By all measure, it has not only achieved but exceeded what it set out to do four decades ago. The fact that it never wavered from its ultimate goals is evidenced not only by the fact that it never considered changing its name, but it never did really change its political agenda. Liberation assumed simply a new meaning, and thus dictated a new strategy. In this it remained a liberation army fueled only by a political program, rather than a liberation army that transformed itself into a national party.

When one is committed only to the welfare of its own ethnic base, it cannot convince anyone, not even itself that it is working towards Pan-Ethiopian goals. As it were, the other ethnicities, including those who claim to represent them become, willfully or not, means to an end. And this is what the other partners of the TPLF coalition need to acknowledge and live with. Since the staying power and hegemony of the TPLF has been based on its military power, security apparatus, and the cooperation of its subordinate partners, it could have never afforded to hold open, transparent and fair election. 2005 has given us a glaring proof for this. The TPLF is clearly aware that democracy is only a decorative word for the system it has put in place. No democracy worth its name has ever claimed to have won 100% of the electoral votes. And in the most unlikely event it did, I think it would question itself. 100% win is a fiction that exists only in repressive and authoritarian governments.

Let us be reminded that since the fall of the Derg Ethiopia has not had a truly national defense and security apparatus. What we have today is a kind of military and security force “on loan” from the TPLF, since they are de facto outgrowths of the TPLF guerrilla army. As everyone knows the overwhelming majority of its top brass remain members of the TPLF, while the rank and file is an assortment of various ethnicities, not excluding members of its own party. I mention this fact, because in essence it is the military and the security apparatus that are the primary maintainer of the status quo, not any perceived or real democracy.

A government that seeks no legitimacy from a free and fair election, besides obviously not being a democratic one, has no reason to remain in power. It becomes, as indeed it has become, oppressive, violent and destructive. No one is naïve as to believe that the TPLF will relinquish its power peacefully, much less willingly. That should not mean that it will never go away, or that it is impossible to unseat it. I do not believe, on the other hand, that the TPLF would be willing to sit at the negotiating table to hammer out the peaceful process by which we can transition to a truly democratic state. No one is willing to seat with those one perceives as having no power. But this is a misperception that the TPLF needs to disabuse itself of: power always and ultimately resides in the people, and not as such in the persons who claim, or even are lawfully elected to represent them.

The point to be made here is simply this: the “other” members of the coalition that form the EPRDF, in the absence of any contending political party, or in partnership with the existing ones, must reclaim their real or presumed share of power because, at least in theory if not in reality, they represent, for better or worse, the overwhelming majority of the people. If they do it all in concert, and with the assertiveness demanded by the current situation, we may be able to see for the first time in 26 years a true change in Ethiopia. What I have unfortunately seen so far from the subordinate members of the coalition is not an assertiveness and independence that has the backing of the majority of the Ethiopian people, but a whimpering pliancy that is quite disheartening.

I am of course alluding to Ato Abadula Gemeda who, a couple of months ago, submitted his resignation as Speaker of the Lower House because, as he claimed, he felt that his people, meaning the Oromo people, had been treated with disrespect during the ongoing unrest. I have no reason to doubt or question the feelings of Ato Abadula, but I can’t help but remind him what he already knows and has accepted already: this is the price that one pays for relegating oneself to a subordinate position, to a minority status. Not only him, but all those who have accepted such state of affair will have to swallow their pride, at one point or another, and submit to the humiliation that their bargain with the TPLF entails. I say that they have never claimed, nor the TPLF was ever tempted to let them claim, the equal partnership that their status as representatives of majority populations should have guaranteed them. We all know that the TPLF needed them not as partners but as executers of its will. That is why we hardly ever hear about their respective parties’ “congresses”, but only that of the TPLF, and occasionally of its creature the EPRDF. Everyone knows that the supreme governing body, and the ultimate depository of power in present day Ethiopia has been and remains the central committee of the TPLF.

Acting like as representatives of minority ethnic groups when in fact you are supposedly representatives of majority populations does not earn you any respect, much less sympathy from anyone. If you claim to represent the voices of the majority of the peoples of Ethiopia, act like one: stand by your people, listen to their demands and fight for their rights. The only respect that counts is theirs. And if the TPLF disrespects you for that consider it a badge of honor.

The time is finally here for the other partners of the EPRDF to make their voices heard: are they going to simply continue to submit to the directives of the central committee of the TPLF, now headed by the haughty and contemptuous Debretsion, or are they going to stand up by their peoples and protect their lives, rights, possessions and welfare? If they do not, they should not expect history to be kind to them. If they keep on being manipulated or worse subdued by a party that has never sought nor will ever seek any legitimacy for its power from anyone, they will forever miss a golden opportunity to redeem themselves.