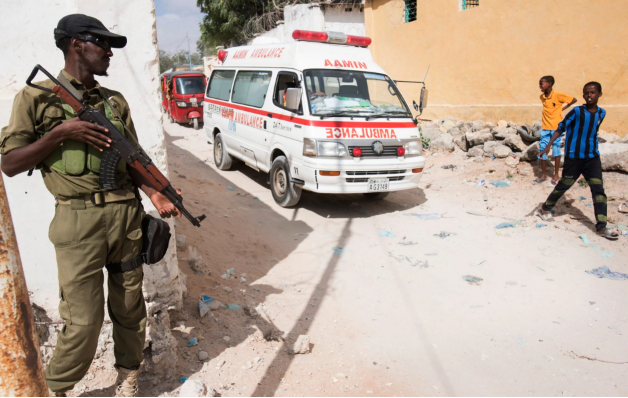 For the first hour after the blast, the smoke was so thick it was almost impossible to breathe.

But even as volunteer medics struggled to make out survivors to rescue, Abdulkadir Abdirahman Adan knew it would be the worst day of his 12 years running ambulances in one of the world’s most violent cities.

“I got there in about 15 minutes. The first thing I saw was a truck burning. Cars, trucks, motorcycles – all of them burning,” the 44 year old dentist said.

“I saw a man in a burning car, and we couldn’t do anything for him – there were no fire fighters,” he added. “We did what we could. We transported almost 250 people.” At least 512 people were killed in the suicide truck bombing that ripped through Mogadishu’s busiest street on the afternoon of October 14. Dozens remain unaccounted for.

The blast was Africa’s worst ever terrorist attack, and it dealt a shattering blow to a fragile but tangible sense of optimism that Somalia was leaving nearly three decades of war and insurgency behind it.

It also cast a critical light on the International community’s claims to have Al Shabaab, the al-Qaeda-aligned group believed to be behind the blast, on the run.

Stretched along a perfect sandy beach and blessed with a historic old town and port, Mogadishu once liked to call itself the Pearl of the Indian Ocean.

From the top of one of the watchtowers overlooking the newly established British Army base here, it only takes a little imagination to see why.

Built on low rises descending to the coastal plain, a dusty cream coloured cityscape rolls down a lazy slope to where the still luxuriant (if plastic polluted) white dunes meet the breakers of the brilliant blue (if shark infested) ocean.

But Mogadishu today is anything but a normal city.

Since Al Shabaab were evicted in 2011, it has been the capital of a fragile but internationally recognised government propped up by 22,000 troops from the African Union.

Members of the diaspora have begun to return in search of business opportunities, and international assistance has flooded in as governments including the UK, US, Turkey, and United Arab Emirates rush to secure their own interests in the Horn of Africa.

But today it is so thoroughly infiltrated by Al Shabaab, that it is impossible to describe as anything other than a city at war.

The city centre remains a chaotic and heavily militarised maze of Hesco barriers, concrete blast walls, and checkpoints, and the historic seaside Old Town has more in common with Stalingrad than Dubrovnik.

Most tellingly of all, the vast army of foreign diplomats, aid workers, and soldiers (the British contingent are advising rather than fighting), dispatched to help rebuild Somalia are confined to the heavily fortified airport, which they cannot leave without armoured vehicles and a small platoon of gunmen to protect them.

The lorry that devastated central Mogadishu on October 14 is widely believed to have been intended for a foreign compound but detonated prematurely.

The mistake – and the popular outrage at the resulting carnage – may explain why the group has not claimed responsibility, officials here say.

The government is hoping that shared revulsion will translate into an elusive sense of national unity.

“October 14 brought out the best in Somalis,” said Jamal Hassan, the Somali minister of planning.

“Before and after it, the security situation had been improving, and December was the first month in many without a major incident in the country. In general, things are getting better,” he added.

Somali and foreign officials say Al Shabaab is on the back foot. But everyone in Mogadishu also acknowledges they have proved remarkably resilient.

Despite the deployment of an increasingly internationalised effort to crush them – including a supposedly clandestine but barely concealed US campaign of drone strikes and special forces raids – the terror group retains control of large areas of the countryside and has effectively closed key roads, making air travel the only safe way to travel between government held towns.

Somalia been in a near-constant state of war since an uprising ousted the dictator Mohamed Said Barre in early 1991. A succession of battling war lords, would-be presidents, Islamists and foreign powers over the following years left the capital in ruins and destroyed any sense of a municipal – let alone national – state.

“In other words, Al Shabab isn’t the problem. It’s the symptom,” said one Western military officer advising the Somali army. “The problem is the complete collapse of the state.”

Strangely, the same could be said of the paramedics who risk their lives to clear up the terror group’s carnage.

Aamin ambulance, the tiny bunch of volunteers who rode into the smoke and attempted to triage the October 14 catastrophe, are currently the only first responders available to ordinary Mogadishu residents.

The group began in 2006, when Dr Adan returned from six years abroad to find the district where he chose to open a dental practice was a battlefield, and any semblance of a functioning state had vanished -including the emergency services.

“More people were getting killed and wounded in that market than anywhere else, but people had to be pushed to hospital on wheelbarrows,” he recalled.

“So if you had catastrophic bleeding, you’d die before you got there. And even if you had a car there were checkpoints, and they’d question you: ‘where did this patient come from? Who injured him?’ And if you answered the wrong way you might be arrested,” he said.

Inspired by a similar project he’d come across while studying dentistry in Pakistan, he blew his $4,200 savings on a second hand Toyota minivan, wrote the world ‘Ambulance’ on it, and began ferrying casualties across the city.

Twelve years on, the service has grown to ten ageing second-hand Japanese ambulances and 35 volunteer staff including paramedics, drivers, and logistics managers.

It even has a 999 telephone number that connects to a barebones operations room, consisting of one man and a laptop – the only free, first response ambulance service available in the entire city.

“We respond to any emergency – women in labour, children with diarrhoea, hypertension…” said Abdulkadir Adbulahi Abdi, a 22 year old driver.”It’s still mostly bombs though. It used to be about two a month, but there are a few less these days.”

But it is dangerous work. An ambulance was destroyed by an Ethiopian tank shell in 2008. Mr Abdi, the young driver, said he has twice been nearly caught by secondary explosions when responding to bombings. “It’s always worrying. You have to check before you go in,” he said.

They have received some training from the International Committee of the Red Cross. On Friday they completed a week long course taught by MayDay rescue, the British Charity that trained the Syrian White Helmets.

Dr Adan says he dreams of expanding the network across the country but he is frank about the difficulties.

The staff are few, they are desperately short of basic equipment, and their expertise not always equal to their remarkable commitment.

He guesses “many more” lives could have been saved on October 14 if they’d had basic items like tourniquets. “What we had that day was better than nothing. But it wasn’t enough,” he said.

“The idea is there,” shrugged Dr Adan. “But this is a city of up to 3.5 million people. I’ve got 20 paramedics and ten drivers.”

Three months on, it is almost impossible to imagine the carnage that occurred on the Makkah Almukarramah avenue, Mogadishu’s main thoroughfare.

The traffic jams are as busy as ever, and the most visible damage has been boarded up or patched over.

The rubble of the three storey Safari Hotel, which was completely destroyed in the bombing, has been swept clear and fenced off behind a corrugated steel screen.

“On the day, we couldn’t tell whether we were handling bits of human or bits of coal,” said Mustafa Saleh, a 26 year old Aamin volunteer who was on the scene that day.

“But in five days, people had cleared the whole thing up. Somalis are resilient.”