Home World News/International Conflict/Crime Is The Notorious B.I.G. LIVING with Tupac in Somalia? Fan frenzy as... 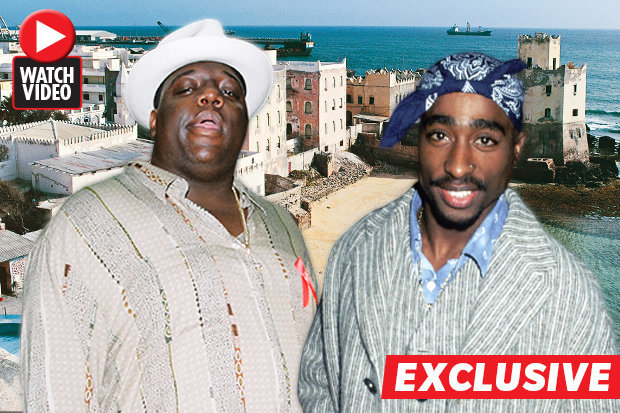 BIGGIE SMALLS could be alive and living the life of luxury with Tupac Shakur in Somalia – according to wild conspiracy theories circulating online.

Ahead of the release of a new feature into the lives of the music legends, one fan revealed he had seen Tupac alive in Somalia, alongside well-known friend and founder of Outlawz hip-hop group – Yaki Kadafi.

In the post, suldaan_mahdi wrote: “I’ve seen Tupac and Kadafi way after their sad deaths – in Somalia.

“I’ve seen them both alive. I was in a car and they were heading in the other direction.

“Kadafi was doing some kind of hand signals – he looked kind of funky.”

But now, fans think this must be proof that the rapper faked his death and is living alongside Biggie Smalls.

“Well, since we know Tupac is still alive he might as well come out of hiding along with Biggie”

Conspiracy theoristTaking to Twitter to share their opinions, a mass of support has surfaced over the last few days to support the theory.

One tweet read: “If Tupac is alive, Biggie is alive too.”

Another added: “Well, since we know Tupac is still alive he might as well come out of hiding with Biggie.”

And a third stated: “Tupac and Biggie must have staged their death. If Tupac is alive, Biggie can be alive too.”

“I bet Tupac and Biggie are having a great time if they’re in Somalia,” another added.

According to all known records, Tupac was shot four times in a drive-by shooting in Las Vegas, Nevada, on September 13, 1996.

He was rushed to hospital where he died six days later.

While Christopher George Latore Wallace, better known as Biggie Smalls, was shot and killed on March 9, 1997.

The American rapper left a party with his entourage early in the morning, after it was shut down due to overcrowding.

His car stopped at a red light and a black Chevy Impala pulled up alongside.

An African-American inside the vehicle then drew a 9mm pistol and shot four bullets in to the chest of Wallace.

His friends rushed him to hospital, but he was pronounced dead shortly after.

After he was killed, many people speculated it was linked to the murder of Tupac, who died six months previously.

The two were killed in identical drive-by styles and were both known to be involved in the East Coast-West Coast rap rivalry.

Neither of their killers were ever found.

The first episode of a new series called Unsolved: The Murders of Tupac and the Notorious B.I.G aired last night.

The series aims to chronicle every detail surrounding the deaths of the two rap icons.

It features Marcc Ross as the main character – Tupac.

He has previously acted a similar role in the 2015 hit movie Straight Outta Compton.