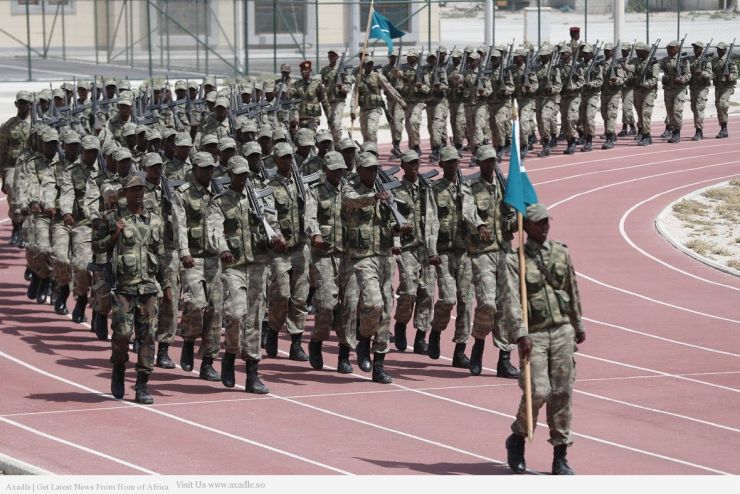 The Federal President of Somalia, Mohamed Abdullahi Farmajo, put a well-orchestrated military plan his commanders dubbed ‘Operation Lightning Strike’  into full gear sending armament, ammunition, and trained troops to the battlefront with the Republic of Somaliland in the last two to three days – and still on.

Planes were seen being loaded with crates upon crates containing millions of rounds of ammunition, disassembled heavy artillery, mortars and spare parts on the Halane side of the Adan Adde International airport of Mogadishu. Convoys of mechanized troops traveling by land were also reported.

Boarding the planes in an ordered fashion, fully-equipped military units estimated at a total of 600-1000 men, who had been trained at the Turkish base and elsewhere at the many other foreign-supported training grounds in and around Mogadishu, have also been identified in line with points 1.5 and 1.6 of the recently concluded security council meeting of the FGS and the Somalia Federal states in Baidoa.

#OperationLightningStrike is planned to open multi-fronts on the Somaliland army currently in defensive positions near Tukkaraq village of Sool. The two armies of Somaliland and Puntland, fronting for Somalia, clashed in the area several times before with the latter suffering heavy casualties.

The unabashed, openly waged campaigns on the Puntland side crying for clan support seems to be paying it dividends with the ill-concealed military, morale, and material support President Farmajo, who belongs to the same clan as Gass of Puntland, is ferrying nonstop to Garowe and adjacent airstrips.

Very confidential sources who had witnessed the loading of commissioned planes have come to know that Somalia planned to put all its might behind a blitz offensive against Somaliland positions on Eid day or immediately after or before it – give or take two to three days either way at the most.

The plan is to penetrate the Somaliland defenses from several directions and to smuggle arms and ammunition into Las Anod city in order to try to capture the town from within so to isolate the frontline positions of the Somaliland army.

Somalia, of recent, did not conceal its ambitions and claims against its erstwhile partner in the ill-fated political union of 1960, denying the fact that Somaliland joined its younger partner as a fully-fledged, sovereign, internationally recognized state with a constitution, functioning parliament and a ministerial council in place.

Somaliland restored its lost independence in 1991 on an all-clan resolution at Burao and had since then been on its own for these past 27 years building a modern, very democratic, fully functioning state so commended by the international community.

The international community started to open a dialogue between the two sides in 2012 but had not had the drive or the commitment to see it through. The talks petered off eventually after Somalia started to disdainfully violate agreed parameters one after the other.

Unchecked and unreprimanded, it has now come to a stage where Somali is once more starting another civil strife, not unlike that of the 1980s between Somaliland fighters and the southern-dominated military regime of Siyad Barre which ended in his ignominious deposal in January 1991.

Political analysts accuse Farmajo and his kinsman Gass of embarking on a revenge political and military offensive against the more successful, peaceful enclave that is the Republic of Somaliland.

Somaliland is not very confident that an international community which previously failed to check the excesses of Somalia in failing the talks can come up with a meaningful resistance or even expose it now that the FGS’s Farmaajo is openly arming Puntland and sending it troops all belonging to one clan.

On the other hand, many Somalians across a wide political spectrum are increasingly becoming disturbed and uncertain of where President Farmajo’s disoriented leadership is taking them.

Not only in remote areas are the AMISOM and the US troops battling Al shabaab but Mogadishu, itself is witnessing a revival of street fights with hitherto sleeping cells of an emboldened insurgency.

This despite an estimated 80 000 to 100 000 troops – registered and unregistered – since the Kenyan and Ethiopian presence is known to swell with unknown numbers as their respective commands deem necessary.

The picture below where President Farmaajo, himself, is frisked by AMISOM foot soldiers at one of the gates of the Hallane compound, near the international airport, where the international community lives and works starkly, portrays Somalia’s current situation.