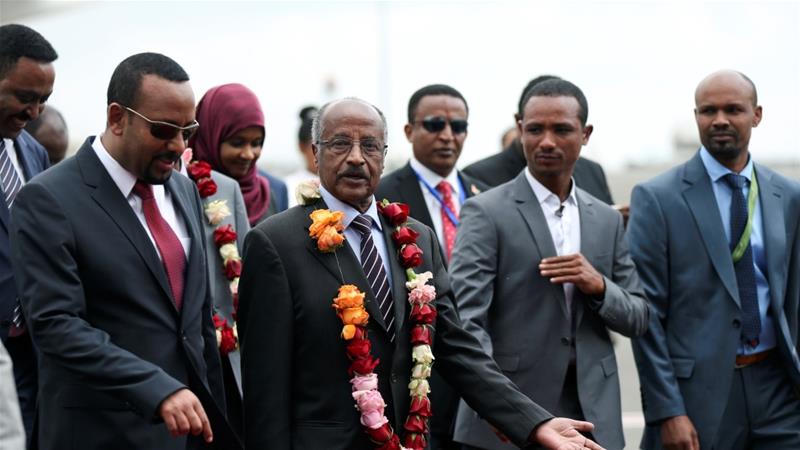 Landmark peace talks could pave the way for the end of proxy wars and bring stability to the region.

On Tuesday, as dawn broke with a hint of sunlight piercing through the thick rain-season clouds, residents in Addis Ababa woke up to an unusual sight.

A spectacle so rare, not seen for more than two decades: an Eritrean flag hanging side-by-side their own one from lamp posts in the main streets of the Ethiopian capital.

Nearby, several banners reading “Welcome” in Amharic, Ethiopia’s main language, and in Tigrinya, one of Eritrea’s official languages, also appeared.

Bigger surprises were in store for them. It wasn’t long before news bulletins announced a high-level delegation from Eritrea – Addis Ababa’s long-time foe – would arrive in Addis Ababa for landmark peace talks.

Like the rest of Ethiopia, Addis Ababa – a city of three million people – is trying to keep pace with the breathtaking reforms introduced by the newly appointed Prime Minister Abiy Ahmed.

Since taking office in April, 42-year-old Abiy has announced a series of moves to liberalise the economy, overseen the release of thousands of jailed dissidents and the end of a state of emergency imposed on the heels of violent anti-government protests.

Abiy went to the airport to receive the Eritrean delegation led by Foreign Minister Osman Saleh and Yemane Gebreab – a senior aide with close ties to Eritrean President Isaias Afwerki.

The two East African neighbours have a long and complicated history.

Eritrea was an Ethiopian province until 1993, when it gained independence. Initially, the two countries enjoyed close relations, but all that changed when a bloody border war erupted in 1998. All ties were cut as the conflict claimed the lives of more than 80,000 people and separated many families.

Then, in a surprise move early this month, Abiy said Ethiopia will give up its claim to the disputed border territories that triggered the fighting.

Days later, the Eritrean leader said he will send a delegation to Addis Ababa to “gauge current development” in the region.

More talks are expected to take place in the coming weeks and months.

But how significant are these meetings and what will the thawing of relations mean for the two countries, split families and the wider region?

Ever since they went to war, the two countries have supported – both financially and militarily – groups opposed to each other’s central government.

Eritrean rebels groups based themselves in Ethiopia and have on several occasions carried out deadly attacks within Eritrea.

In 2011, late Ethiopian Prime Minister Meles Zenawi publicly said his government would support Eritrean rebel groups in a bid to overthrow the administration in Asmara.

Several groups opposed to Addis Ababa are also based in Eritrea.

But the hostilities extended beyond their borders. The two Horn of Africa countries have also supported various groups in the conflict in neighbouring Somalia.

Observers now believe that the thawing of tensions will help bring about more stability in the region.

“The talks are significant when it comes to the proxy wars between Ethiopia and Eritrea,” political analyst Abebe Aynete told Al Jazeera.

“If the talks succeed, it will lead to an end in the proxy wars. If relations normalise, there will be no need to support each other’s rebel groups,” he added.

Last week, Ginbot 7 – an armed Ethiopian opposition group based in Eritrea – said it was suspending attacks in Ethiopia in order to support the agenda announced by Abiy.

“Our forces have received strict orders to refrain from any sort of armed resistance,” the group said in a statement posted on their Facebook page.

Ethiopia has one of the fastest growing economies on the continent but has been landlocked since 1993 when Eritrea, which previously comprised the country’s entire Red Sea coast, seceded.

“Access to port is a huge hurdle when doing business in Ethiopia. Logistically, it is not easy doing business in a landlocked country. If the two countries solve their differences, Ethiopia will get access to Massawa port and Eritrea will collect taxes,” Eyob Tesfaye, an economist based in Addis Ababa, said.

Ethiopian Airlines, Ethiopia’s national carrier and the biggest in Africa, is also eyeing the Eritrean market.

“For Ethiopians who have missed going for a stroll in [the port city of] Massawa, I call on you to get ready as Ethiopian airlines will start services there soon,” Abiy said on Tuesday at a state dinner hosting the Eritrean delegation.

Asmara will also hugely benefit from tapping into Africa’s second-most populous country when the crisis is resolved, according to Eyob.

“Eritrean goods will find a huge market in Ethiopia, a country of 100 million people. Ethiopia can also start selling electricity to its neighbour,” Eyob added.

Abebe, the political analyst, also believes that the thawing in relations will also lead to political reforms, including the abolishment of military service.

For years, thousands of Eritreans have left their country complaining of indefinite conscription into the country’s army.

The Eritrean government has previously claimed that national service was necessary for self-defence in light of the long-standing hostility with neighbouring Ethiopia.

“With no hostilities, Isaias will have no reason for the military service. He will be left with no option but to introduce political reforms,” Abebe said.

The two countries do not merely share the same history and culture but close blood relations, too. The conflict tore apart families and the arrival of the delegation was well received by many across Ethiopia.

I missed my father’s funeral because I could not go to Eritrea,” Yonas Abraham, a journalist in Addis Ababa, told Al Jazeera.

“I have not seen my family for 20 years,” added Yonas, who is Ethiopian but his family are Eritreans and were deported when the conflict started.

Like many on both sides of the border, he has welcomed the effort to resolve the conflict – and eagerly awaiting for relations to normalise to visit his relatives.

“I’m Ethiopian, but also feel Eritrean. When it is sorted out, I will go to Asmara to see my family for the first time in 20 years,” he said.

But not everyone has been quick to embrace Abiy’s peace overtures.

Abrha Desta, chairman of the opposition ARENA party in Tigray region, said the prime minister should not solve the issue at all costs.

“Implementing the border commission ruling will only escalate the conflict. It should be the people of the disputed regions that should decide how to solve the issue – not [an] outside commision. The agreement will lead to the division of people of the affected regions,” Desta said.

But before the two countries manage to resolve and put their differences behind them, many more talks like the one in Addis Ababa this week will have to be held.