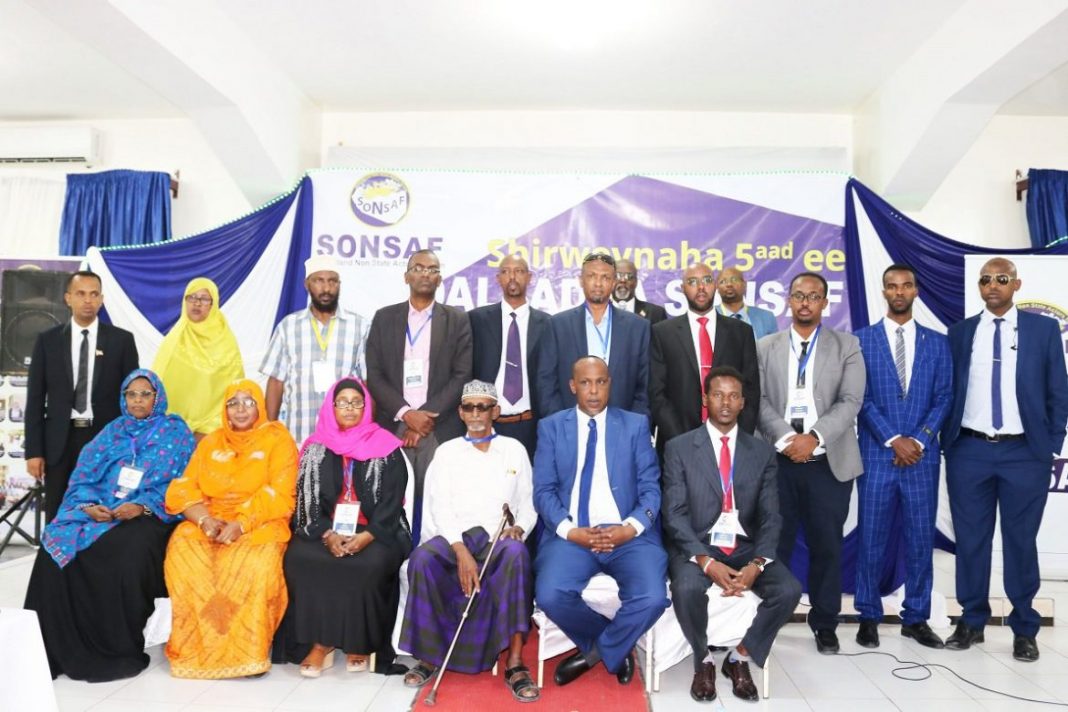 Somaliland Non-State Actors Forum(SONSAF) this week (July 3, 2018) held its Fifth General Assembly in which they elected a new chair and new Board of Directors during a meeting held the Ambassador Hotel, Hargeisa.

The meeting brought together 60 delegates from Somaliland Non-State Actors Forum and 40 delegates from the civil society organizations business groups, traditional leaders, professional associations, religious leaders and members of the public.

Hon Awale Ibrahim Shirwac, the Minister of National Planning and Development, officially opening the meeting, commended members of the Somaliland Non State Actors Forum (SONSAF) for exercising total civility while electing their new Board Members including Chairperson, Vice Chairman, Treasury and secretariat and at the same time urged them to continue to operate as a bridge between the community and the government by advocating on the issues affecting the society such as service delivery and to give voice to vulnerable groups.

The outgoing chairperson of Somaliland Non-State Actors Forum, Mr. Mustafe Saad Dhimbil speaking during the event gave an in-depth briefing on the role of the network which was founded in 2005 and its achievements since then. He further pledged to avail his cooperation and full support to the incoming team.

The Minister of Employment and Social Affairs, Madam Hinda Jama Gaani, thanked the Somaliland Non-State Actors Forum for their crucial role in advocating for the inclusion of women and marginalized groups in the decision of making process of the country.

Speaking during the takeover of the chairmanship of the civil society network leadership, Hon Anwar Abdurrahman Warsame said that he and his incoming team first priority will to take SONSAF to a whole new different level within a period of two years and he also called upon other members of the network to put their differences aside and instead strategize on some of the issues which are hindering their activities.

Hon Anwar Abdurrahman Warsame has been working with Somaliland civil society for more than 20 years and has experience and background in CSOs and a member  SONSAF of since its establishment back in 2005.