Dr. Saad Ali Shire, Minister for Foreign Affairs and International Relations of the Republic of Somaliland, defended his country of a number of acerbic barbs and allegations detractors aimed against how the administration handled foreign diplomacy, Berbera port operations, airspace management and foreign aid.

The Minister flanked by the Vice Minister, the Director of the Somaliland Diaspora Agency, the Director General and a number of other high-ranking officers of the ministry responded to questions gunned at him by the press.

“Somaliland relations with neighboring countries and the outside is at its peak,: he said. “I have made working visits to a number of countries, have met with partners, and have touched base with new and old friends alike,” he said.

Speaking of a rumored setback to Somaliland’s established relations with neighboring Ethiopia, and especially at a time  that country has effected a number of far-reaching reforms at the helm of which was its new PM, Abiy Ahmed, Minister Saad said bilateral relations was never better. The Minister cited his meeting with the Ethiopian FM, Dr. Workneh Gebeyehu, only last week and how fruitful that meeting was, sealing the two countries’ relations further.

“Our relations with Ethiopia are based on mutual interest spanning over security, economy, infrastructure, cross-border trade and movement of nationals of both countries. The bond between us is steadfast, enduring and deep-rooted,” he stated.

On foreign aid and if government coffers regarding development programs we presently depleted and empty affected by Federal Somalia meddling, the minister said “the Somaliland Development Fund supported by EU countries such as the United Kingdom, Norway, Netherlands and Denmark is functioning as was planned. No amount of adverse intervention on the part of Somalia can dislodge the smooth operations of that fund. As to the UN, we aware of no negative effect on bilateral relations and as pertaining to development projects,” he said.

The Minister revealed that his government was not unduly concerned by the alleged, total control of Somalia on common airspace.

“We have signed a road map on shared management and airspace control with Somalia. Somaliland will not be standing on the sidelines as a spectator. We are confident that a mutually beneficial arrangement will be struck once the final points are ironed out, and signed and sealed,” Dr Shire pointed out.

Minister Saad confirmed that Berbera port operations and the agreement which the Somaliland government signed with the Emirati DP World was on course. He said actual construction of new quay and related projects were expected to commence within the year.

Of late, the opposition and the Somaliland media had put the spotlight on a number of issues at the center of which the Ministry of Foreign Affairs was to be. The opposition, specifically, targeted the soft-spoken, academic minister, Dr. Saad, accusing him of diplomatic ineptitude.

Seeing him speak and weighing the logic on which he based his arguments, nonetheless, always won the day on his favor. 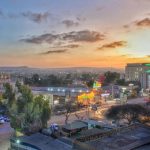