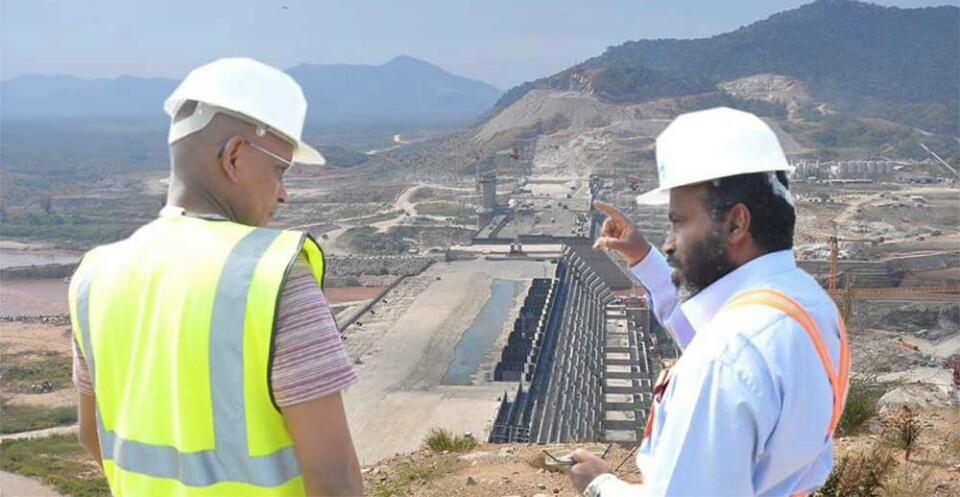 It is quite visible that he is stricken hard by the sudden death of his son.

“Ethiopia is dead. Gonder is dead. Addis Ababa is dead. What else could I say? My country is dead,” grieving Abahoy Simegnew Aynalem told Oromia Broadcasting Network reporter who was at the residence of the engineer to cover grieving.

Mother-in-law of the late Simegnew Bekele says “he was her first son.” She added that he was married to her daughter for twenty-four years. “He never lived in the house. He was always out to Gilgel Gibe and what not…let Ethiopian people give verdict”

There is an outrage across the country. Yesterday, residents in Gonder took to the street demanding that the government should get to the bottom of it and disclose the findings to the public. Law enforcement forces reportedly shot and killed one person while trying to disperse the crowd. There was a similar protest in the capital Addis Ababa yesterday.

Federal Police Commissioner, Jemal Zeinu, confirmed yesterday that the engineer died of a bullet wound at Meskel Square in the city center and that handgun was found on his right hand.

However, there seems to be a consensus among Ethiopians that there is no way for the engineer to commit suicide as he was heading to meet with media to provide an update on the progress of the Grand Dam project.

Although police has not yet confirmed that the case was an assassination, high ranking government officials seem to believe, just like the Ethiopian people, that Engineer Simegnew Bekele was assassinated.

Addressing a gathering of Ethiopian North American Muslim Foundation (BADR), in Virginia, the United States, Prime minister Abiy Ahmed is cited as saying, by his chief of staff Fitsum Arega, “The circumstances of his death—in daylight at the heart of our capital—is a provocation to shake our resolve.” and that he vowed justice will be served.

In his address in VA, PM Abiy paid tribute to Eng. Simegnew Bekele—a hardworking Ethiopian hero. He expressed his heartfelt sorrow. The circumstances of his death—in day light at the heart of our capital—is a provocation to shake our resolve. He pledged justice will be done. (2)

The Deputy prime minister Demeke Mekonnen was apparently struggling with tear when he expressed his condolences today. “The death of Engineer Simegnew Bekele will never be will never be ditched…the day the matter will be disclosed to the family and that justice will be done is not far,” he added.

Nigussu Tilahun, who is communication head of Amhara Regional State, on his part, says “The murder of Engineer Simegnew is a plot to disrupt the ongoing change”

In what many analysts say was an effort to create a crisis in Ethiopia, country director of Dagonte Cement country director, Deep Kamara, was shot dead along with his secretary and drive in May of this year in Oromo regional state of Ethiopia.

This week eleven people were killed in Bale and a pregnant woman was shot dead, apparently for nothing, in Dembi Dolo, Wolega, in Oromo regional state,West Ethiopia.

The situation that looks like anarchy, given the history of Ethiopia, is alarming Ethiopians if the government is in control of the country and if so to take proactive measures before those who opposed to the ongoing change are reorganizing to reverse it or take the country along the path of ceaseless conflict. However, some analysts advise Abiy Ahmed’s government not to embark on a forceful measure as that would, they think, give a ground for the reactionary forces to take the country along the avenue of violence.