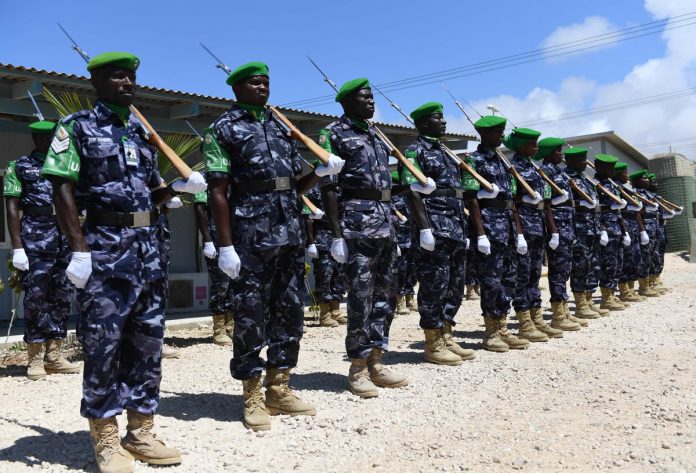 An AU police contingent of 160-personnel is due to leave Somalia over the weekend, after a year’s tour of duty in the Horn of Africa country.

The team from Uganda’s Formed Police Unit is part of a multi-national police force under the African Union Mission in Somalia (AMISOM), which is training and mentoring Somali police officers.

Uganda first deployed officers of the Formed Police Unit in 2012. Since then, they have played a critical role in the Mission’s operations and provided professional support to their counterparts in the Somali Police Force. The outgoing contingent is the sixth deployment.

“Because of your contribution and support to the Somali Police Force, we have been able to have a spell of stability and peace in Mogadishu. Businesses flourish as we speak. Investment is growing at a very fast rate. The flights to Mogadishu have increased. In fact, Mogadishu International Airport is now one of the busiest in the whole of eastern Africa. And this is simply because of your contribution to this kind of environment as the police component,” Mr. Simon Mulongo, the Deputy AU Special Representative for Somalia told the outgoing police officers, during a medal awards ceremony held in their honour, in the capital Mogadishu today.

Mulongo also underscored the important role the African Union is playing in the growth and development of Somalia.

“AMISOM Police is very proud of the Uganda Formed Police 6, and indeed grateful for the service they have provided in Somalia,” remarked Rex Dundun, the police Chief of Staff.

The outgoing contingent which deployed in Somalia on 4 August 2017, will be replaced by a new police contingent from the same country, under the command of Senior Superintendent of Police (SSP) Richard Onyait.

“Uganda Police Force receives you with high salutations for the contributions and well representation you made on behalf of Uganda, to AMISOM. This is a Pan-African spirit which should be emulated by all police officers here and at home,” said Grace Turyagumanawe, the Director Peace Support Operations in Uganda Police Force, who is on a working visit to Somalia.

Officers from the Formed Police Unit provide oversight to patrols in the city and the Federal Member States, to ensure maintenance of law and order, train their Somali counterparts and contribute to public order management; participate in cordon and search operations; and provide VIP protection services, among other tasks.