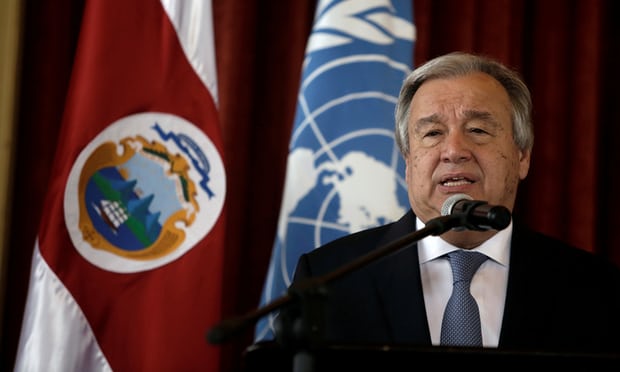 António Guterres, the UN secretary general, has warned that the organisation is facing an unprecedented shortage of funding for its core budget and will need to make urgent cuts unless member states pay up.

The alarm was raised in letters, seen by the Guardian and other news organisations, sent by Guterres to member states and staff.

Guterres told member states that the UN’s core budget was in the red more deeply and earlier in its financial year than it had ever previously experienced.

He added that, as of 30 June, core funding had a deficit of $139m (£106m), and said the UN had “never faced such a difficult cash flow situation this early in the calendar year”.

In a second letter sent to staff, seen by the Guardian, Guterres underlined the UN’s precarious finances.

“Caused primarily by the delayed contributions of member states to the regular budget, this new cash shortfall is unlike those we have experienced previously,” he wrote, warning the funding crisis posed a risk both to the organisation’s operations and “reputation”.

“Our cash flow has never been this low so early in the calendar year, and the broader trend is also concerning: we are running out of cash sooner and staying in the red longer,” wrote Guterres.

“An organisation such as ours should not have to suffer repeated brushes with bankruptcy. But surely, the greater pain is felt by those we serve when we cannot, for want of modest funds, answer their call for help. Guterres wrote.

The UN general assembly budget committee agreed in December on a $5.4bn core UN budget for 2018-19, which US ambassador Nikki Haley said was a cut of $285m from 2016-17. UN peacekeeping is funded separately.

According to the UN, 112 out of 193 member states have so far paid their share of the core budget. The US, which is responsible for 22% of the budget, traditionally pays later because of its budget year.

The countries that have so far failed to pay include the US, Argentina, Syria, Venezuela and Belarus.

By July last year, 116 countries had paid, compared with 98 in 2016. China, France, Russia and Britain – the permanent members of the UN security council along with the US – are all paid up for 2018.

Guterres told staff he was concerned with a broader trend. “We are running out of cash sooner and staying in the red longer,” he said, adding that the UN would take measures to reduce expenses with a focus on non-staff costs.

Haley came to the UN in January last year pushing for reform of the world body in a bid to cut costs.

“The inefficiency and overspending of the United Nations are well known. We will no longer let the generosity of the American people be taken advantage of or remain unchecked,” she said in December, when the core budget was agreed.

Under UN rules, if a country is in arrears by an amount that equals or exceeds the contributions due for the previous two years, it can lose its general assembly vote unless able to show that its inability to pay is beyond its control.

Comoros, Guinea Bissau, Sao Tome and Principe and Somalia are significantly in arrears but have been allowed to retain their vote. Only Libya is unable to vote.