Home Economy/Business Investors to benefit from Kenya and Somaliland ties 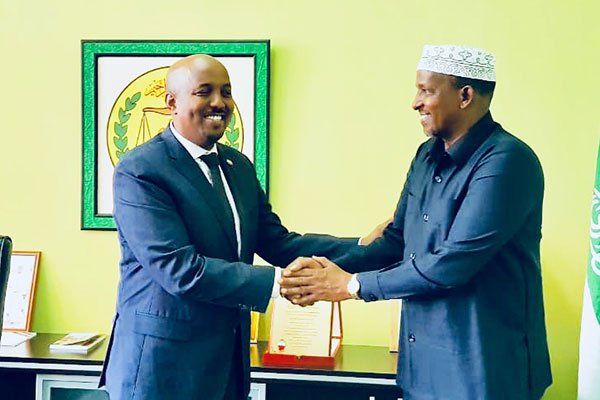 Investment opportunities are expected to be seized as foreign relations between Kenya and Somaliland grow.

Mr Bashe Awil Omar, Somaliland’s envoy to Kenya, said his country seeks to ensure its ties with Kenya are cemented.

“The cooperation between Kenya and Somaliland will see trade between the two countries grow. We will also work on improving security in the region and empower the hundreds of thousands of youth to invest or further their education,” Mr Omar, the former ambassador to the United Arab Emirates, said on Wednesday.

With a liaison office already set up in Kenya, Mr Omar said he plans to meet Kenyan government officials to explore opportunities for the benefit of citizens.

Somaliland broke away from Somalia in 1991 and is seeking international recognition.

“We (Kenya and Somaliland) are already working together when it comes to security and fighting terrorism in this region. But there is so much that remains to be done for us to cooperate and coexist together,” he added.

Among the areas that need to be bolstered are trade, agriculture, education and health.

“These are the areas we want to work on. It is a tall order but I do believe we will soon get rid of restrictions and open the space for our people to easily travel between the two countries,” he said.

He said there are over 18,000 Somaliland citizens residing in Kenya, and as the bond improves more are expected to trickle in.

Somaliland boasts of a stable and democratic government, its own currency (the Somaliland shilling), and an independent judicial system guided by a constitution that facilitates the rule of law.

Furthermore, it is planning to revamp the Port of Berbera on the Gulf off Aden into a regional trade hub after a $442 million (Sh44bn) deal with Dubai-based development firm DP World.

The port will have access to the maritime highways that connect Europe, Asia, the Middle East and Africa – firmly establishing the semi-autonomous State as a gateway to East Africa.

Mr Omar initiated the deal when he was the ambassador to UAE.

Coca-Cola too opened a $17m bottling plant north of the capital Hargeisa. Ethiopian Airlines and Fly Dubai operate flights in the country.

The country has a youth population of over 70 percent and more than 30 colleges and universities.