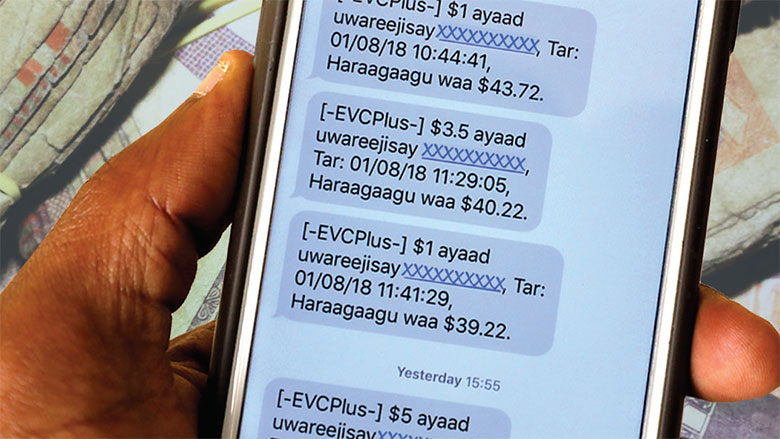 Somalia’s economy has grown modestly between 2013 and 2017, with real annual gross domestic product (GDP) growth averaging 2.5%, according to the new economic update.

The third Somalia Economic Update (SEU), Rapid Growth in Mobile Money: Stability or Vulnerability?, highlights several improvements in 2017, including the implementation of fiscal policy by the federal government. As recommended in the previous SEU, domestic revenue mobilization increased, budgets became more realistic, and execution of the budget improved.

“These developments should allow Somalia to build the fiscal buffers that allow the government to start providing meaningful service delivery to citizens,” said John Randa, World Bank Senior Economist for the Macroeconomic, Trade and Investment Global Practice, and lead author of the SEU.

Despite economic growth, the report notes, that it has not been sufficient enough to reduce poverty, and the Somali economy remains vulnerable to recurrent shocks such as droughts, floods and displacement. The economic update recommends that improving agriculture sector resilience must remain a central element of Somalia’s growth and poverty reduction agenda.

With support from the International Monetary Fund’s Staff Monitored Program (SMP), the government has continued its efforts to broaden the tax base, enhance compliance, and reduce wasteful expenditures. The report notes that as a result, revenues increased from $113 million in 2016 to $143 million in 2017 to $42 million in the first quarter of 2018. The report recommends sustaining progress on both revenue collection and expenditure management is needed to expand the provision of public services and support inclusive growth.

The special section of the SEU assesses mobile money, one of the biggest markets in Somalia, and provides concrete recommendations on introducing mobile money regulation based on global best practices. Recommendations include:

“The challenge for policymakers and regulators is to introduce regulations on a mobile money market that has operated without regulatory oversight,” Randa said.

The report recommends a phased-in approach for regulating mobile money services, with a focus on protecting consumer funds, and ensuring continued and undisrupted service delivery.