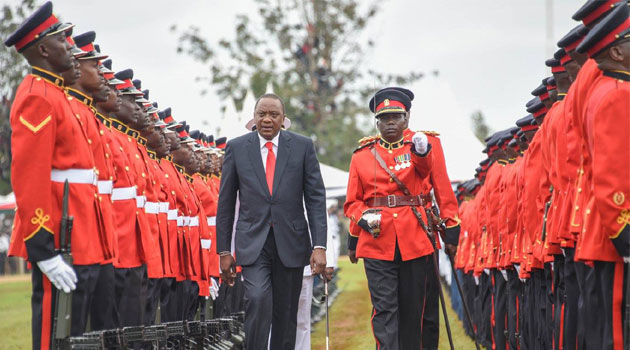 President Uhuru Kenyatta (Sunday) announced that Kenya will not pull its soldiers out of Somalia until the troubled country achieves peace, stability and security.

The President said Kenya Defence Forces (KDF) will maintain their presence in Somalia under AMISOM until all terror networks operating from the war-ravaged country are fully neutralized.

“We went to Somalia in 2011. We shall continue our presence in the country until the restoration of full security in Somalia,” said President Kenyatta

KDF Day is marked to commemorate Kenya’s fallen heroes and heroines who died while defending and protecting the sovereignty, territorial integrity, peace and freedom of the country.

The President said Kenyans are proud and appreciative of the proactive role played by KDF in security operations and peace initiatives in the region especially in the fight against terrorism, a challenge that continues to create fear and despondency among populations.

“Kenyans are proud of their soldiers and the professional, patriotic and disciplined manner they have handled themselves,” the Head of State said.

The President said Kenya cannot let down its guard until the complex transnational terror networks operating in the Horn of Africa region are completely removed.

President Kenyatta said there is need to ensure that Kenyan borders remain secure, a role the KDF has prayed with pride , courage and determination.

He said Kenya’s continued contribution of troops for peace missions was indicative of the government’s commitment to peace and security in the region and beyond.

While calling on soldiers to rededicate themselves to protect the sanctity of human life, remain united and maintain their high degree of integrity and accountability, the Head of State encouraged KDF to continue cooperating with other agencies in times of disasters and emergencies.

President Kenyatta acknowledged the role of KDF in supporting the police force whenever need arises including in disaster and emergency operations adding that the defence forces will play an even bigger role in ensuring the coast guards protect Kenya’s territorial waters especially now that the country is determined to harness resources of its blue economy.

During the ceremony, wives of gallant soldiers who had paid the ultimate prize while in the line of duty were presented with certificates and mementoes in recognition of their brave spouses.

Also presented with the mementoes and certificates of appreciation were serving soldiers celebrated for their heroic roles in various undertakings of the military including rescue missions, sabotaging enemy operations and sports among other successes.

The new processor is the latest addition to the expanding Kenya Ordinances Factories Corporation and will be processing 1000 tonnes of food at its peak. Currently, it is processing 90 tonnes of supplies per day.

Some of the major beneficiaries of the new plant are food crop farmers in five neighboring counties namely Nakuru, Nyandarua, Narok, Elgeyo Marakwet and Nyeri whose vegetables including cabbages, carrots, kales and potatoes will be processed at the facility.

President Kenyatta lauded the KDF for setting pace in the food value addition sector, a key area with huge potential to create wealth and millions of jobs, a key component of his administration’s Big 4 Agenda.

“I am happy to note that the KDF is actively supporting the Big 4 vision. This initiative by KDF addresses the pillars on food security and manufacturing,” said the President

President Kenyatta made an extensive tour of the new factory accompanied by senior military officers led by the Chief of the Defence Forces, General S.J Mwathethe and host governor Lee Kinyanjui of Nakuru and Francis Kimemia of the neighbouring Nyandarua County.

Nearly eight years since Kenya Defence Forces crossed into Somalia in pursuit of Al-Shabaab terrorists, President Uhuru Kenyatta has made it clear that the troops are not coming back home soon. This is a clear indication that the objectives of the military campaign in the war-torn neighbouring country have not yet been achieved.

Indeed, the stabilisation of the internationally recognised government in Mogadishu remains a big challenge. The consequence is the spillover of insecurity across the border. In the recent past, there have been numerous terrorist attacks in the northeastern region of Kenya. Mandera, Wajir and Garissa counties are still under threat from bands of terrorists.

The KDF’s presence in Somalia is an effective strategy to engage the enemy on their own territory. It’s an effective way to keep them at bay. It is also instructive that KDF is operating under the auspices of the African Union Mission in Somalia (Amisom). This has the support of the United Nations, and its sole mission is to help to restore a government in the lawless country.

As an AU and UN member, Kenya has an obligation to support regional peace and stability efforts. Kenya, which shares a long, largely porous border with Somalia, is bound to directly suffer the impact of the jihadist activities. Since the threat that sparked KDF’s entry into Somalia exists, it would be foolhardy to abandon the mission midstream. That would only embolden the enemy.

It is a dangerous but crucial campaign with huge casualties in terms of the KDF soldiers killed in Somalia and increasing attacks on Kenyan territory. This is what has prompted calls for KDF’s withdrawal. But as the President stated, this is not an option now. We must carry on with the mission to liquidate Al-Shabaab.