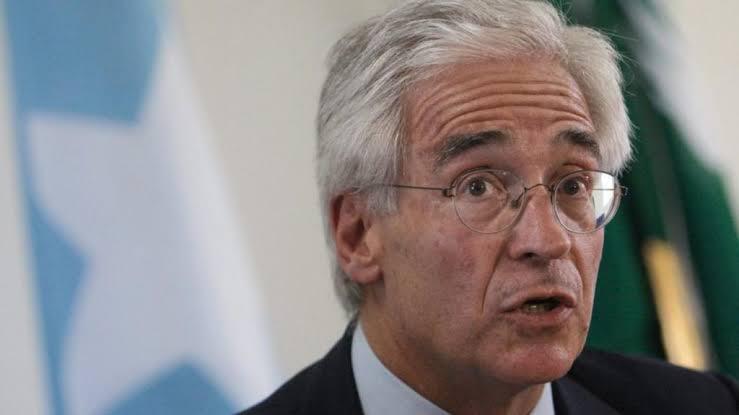 In recent months, the leaders of Somalia have shown how easy it is to bend international diplomats to their own will. They have done so in close cooperation with Qatar government and with the active support of international diplomats. In the process, they filled a Rolodex with names of diplomats who have something to hide and can be blackmailed in the future.

These methods of bribing international diplomat are included, luxury smartphones, expensive watches, best replica watches MacBooks, paid holidays, and money given in cash or transferred via anonymous companies. In return, Somali government’s actions have been met with almost complete silence from international communities which represented by those greedy diplomats.

Alexander Rondos, the EU Special Representative to the Horn of Africa is at the centre of the scam over taking bribes to deflect criticism of Somali Government, and to promote a positive image of Farmajo’s administration. He received 10 payments totaling about $500,000 via Abdi Said Muse Ali, who was a

senior advisor to Rondos before he joined Farmajo’s administration and become National security Advisor. Alex Rondos, a one-time adviser to former Socialist prime minister George Papandreou, was convicted over the mismanagement of

millions of euros in public funds by a nongovernment organization called the International Mine Initiative (IMI), which undertook demining operations in Bosnia, Iraq, and Lebanon.

Unlike other senior western diplomats, Alex has his own luxurious residence in Villa Somalia. A senior officer from the office of Somalia Prime Minister told to the Dossier that “Alex always come and visit the President and Prime Minter after midnight and stays till the next day. Alex arranged a meeting between Workneh Gebeyehu, Ethiopian Foreign Minister and Fahad Yasin, the deputy director of Somali National Intelligence and Security Service (NISA) in Doha. Workneh was paid to $50,000 by Fahad Yasin in exchange for supporting Farmajo’s administration in the IGAD council.

Alex has lobbied within Western Diplomat no to speak out agings the Federal Government’s attack on the opposition, the widespread corruption committed by the Prime Minister Kheire’ s government, infiltration of Al shabab into the security apparatus, particularly NISA, the control of the executive of the Judiciary, the souring relationship between Federal government and Federal member states. The most western diplomat felt that it was not a matter of deep concern.

Many observers believe that the failure to hold the line of accountability against Farmajo’s administration will haunt the international effort of state and peacebuilding in Somali sooner rather than later. Its consequences can be seen in the growing confidence of autocrat tendency of Farmajo’s administrations the increasing ruthlessness of his method and the widespread retreat of democratic principles and undermining the hard-earned progress of the last ten years. The ease with which democratic institutions and safeguards can be undermined has emerged as a fundamental threat to peace and stability in Somalia.

We call a swift investigation to look into Alexander Rondos’s activities and all those involved in this corruption scandal and holds them accountable. Failure to set up an investigation would damage the credibility of European diplomacy and its effort toward peace and state building in Somalia. The EU needs to ensure that it has adequate safeguards in place to protect itself from such forms of corrupt diplomats, which, ultimately, undermine its integrity and credibility.

(Fine was anonymously sent to Somtribune.)