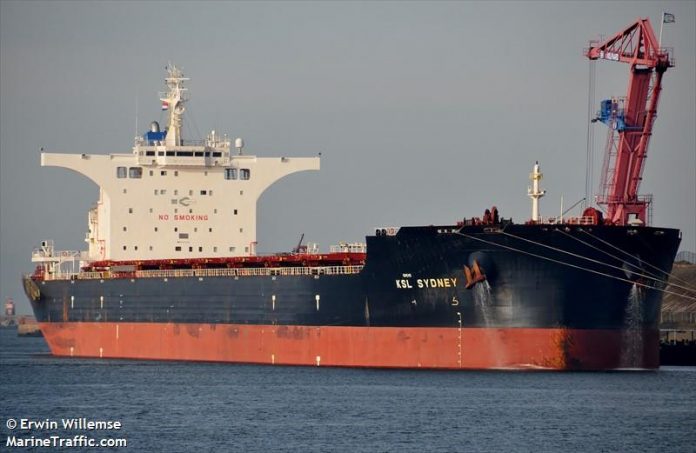 A Hong Kong-flagged bulk carrier was attacked by pirates off the east coast of Somalia this week showing the persistent threat of piracy despite the the decrease in number of incidents off the Horn of Africa.

The attack occurred Wednesday, October 16th, when a group of four pirates armed with AK-47s approached the MV KSL Sydney in a speed boat while approximately 340 nautical miles off Mogadishu, Somalia, according to reports from the IMB Piracy Reporting Centre and EU Naval Force Somalia.

The Master raised the alarm and all crew mustered in citadel. The attack was repelled when armed guards on board the bulk carrier returned fire, resulting in the pirates aborting the attack.

All crew and the vessel are reported safe.

“Due to the application of BMP protection measures by the Master, his crew and the private security team, the piracy attack was thwarted and the crew and vessel remained safe,” EU NAVFOR said in a statement.

“There was a sustained exchange of fire before the skiff with several armed people on board broke off and changed course away from the MV,” the statement added.

Wednesday’s attack is believed to be the second pirate incident reported off the coast of Somalia this year.

In February, the MT Leopard Sun, a Singapore-flagged chemical tanker, was attacked by armed pirates approximately 160nm off the coast of east coast of Somalia, but that attack too was repelled after the ship’s armed security returned fire.

Prior to the Leopard Sun attack, the last attack in the region took place in November 2017 when the British-owned containership Ever Dynamic was chased and fired upon with rocket-propelled grenades. The six pirates in that incident were ultimately captured and later charged in the Seychelles.

In its 2018 second quarter report, the IMB warned that ships transiting the Horn of Africa region remain vigilant despite the decrease in number of attacks. “Masters are however again urged to continue to maintain high levels of vigilance when transiting the high-risk area and to follow the latest version of the best management practices (BMP 5),” the IMB said in its report.