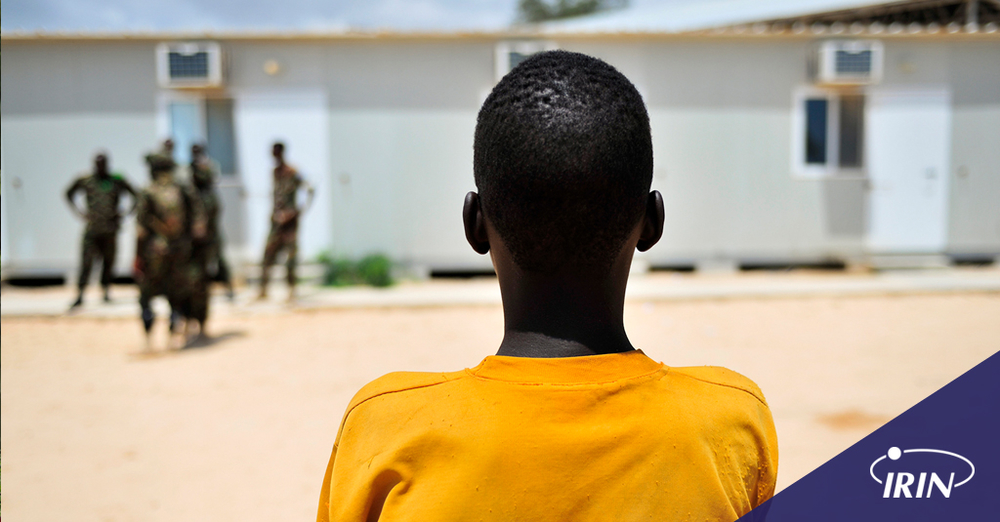 Hassan Ghedi Santur, a Somali‐Canadian journalist, novelist, and the author of “Maps of Exile,” a nonfiction account of African migration to Europe writes  that in order to start a healthy nation onto a healthy course of peace and development, political and development leaders, together with the rest of the nation, ought to start from the grassroots. In this article ‘Reporter’s Diary: Heal Somalia’s former child soldiers, heal a nation’, Santur argues that healing the trauma of former soldiers and leading them back to society as a fully confident peace-builder is one of several ways to build a fully-healed, healthier Somalia.

Even by Mogadishu standards, late September was particularly violent!

Amino Hussein Hassan, a female law student, was shot dead on her university campus. Yahye Amir, a prominent economics professor and political analyst, escaped an assassination attempt when a bomb strapped to his car exploded, killing his brother. And Ahmed Mukhtar Salah from the minority Bantu ethnic group was beaten and burnt to death by a mob after his nephew married a woman from an “inferior” clan.

Violence has been a way of life in Somalia since the outbreak of the civil war in 1991, seeping deep into the nation’s marrow as clan conflict gradually morphed into an all-out war against the al-Qaeda affiliated Islamist group al-Shabab. “The layers of violence that people have had to digest is one of the key problems for building a peaceful and healthier society,” Laetitia Bader, a senior researcher at Human Rights Watch (HRW), told me recently.

Most often, those who bear the life-long consequences are the poor, the politically marginalised, and young people. In particular, the thousands of children who must deal with the trauma of years on the front lines.

In May, I travelled to the capital, Mogadishu – as I have done regularly since 2012 – to report on a crisis that, save for some international NGOs and human rights organisations, few seem to talk about: child soldiers.

There, I met Abdi, 16, a former child soldier. Intelligent and eloquent, he had been a star pupil at the Koranic school in his home town, about 55 miles from the capital. In 2009, at the age of seven, his teacher took him and seven other boys to join al-Shabab.

For two years, Abdi lived in a camp with about three dozen other young recruits. By the time he was eight, he had learned how to drive a car and shoot a gun. By nine, he took part in his first raid in the village of Darussalam Mubarak, where he witnessed an assassination: a man killed by three bullets to the back.

As horrific as that experience was, the image that has most haunted Abdi for years is that of the severed head of a young man his al-Shabab camp commander brandished before the recruits as a warning: this is what happens to informants.

“Even now after all these years, I have nightmares,” Abdi told me. “Sometimes I wake up screaming in the middle of the night.”

While al-Shabab’s use of children as soldiers is nothing new, in the last several years the number of child soldiers has increased markedly.

In al-Shabab’s heyday around 2010, when it controlled vast swaths of the country, including a sizable chunk of the capital, persuasion and indoctrination were enough to ensure a steady supply of young fighters. Since 2016, increased attacks by the Somali national army and US and African Union troops have resulted in a loss of territory for the group. Most recently, on October 16, the US military announced that it had carried out one of the deadliest airstrikes against al-Shabab, killing 60 militants in the Mudug region.

So, desperate for more foot soldiers, al-Shabab has turned to the abduction and forced recruitment of minors. Accurate numbers are difficult to come by. Child Soldiers International calculates that there has been a 269 percent increase in the number of children within the ranks of armed groups in Somalia between 2015, when there were 903 documented cases, to 2017, with 3,335 cases. Meanwhile, according to a May report on children and armed conflict presented by the UN secretary-general to the General Assembly, 1,770 children were recruited as soldiers in 2017 alone, with al-Shabab doing the vast majority of the recruitment. The overall number is likely even higher: UNICEF Somalia estimates that as many as 6,000 children and youths are part of armed groups in the country.

In a single military operation carried out by the Somali National Army and US troops in January on a base near the town of Baledogle, 70 miles northwest of Mogadishu, for instance, 36 child soldiers between the ages of eight and 13 were rescued.

Often untrained and ill-equipped, these child soldiers make for a disposable front line on the battlefield, protecting older, more experienced fighters. This makes them more likely to suffer physical wounds and psychological trauma.

I first met Abdi and other boys through a man I’ll call Hussein. I am not using his real name, or identifying his location, since in addition to running an orphanage he manages a centre that works with young al-Shabab defectors. About 120 boys now live there, two hours’ drive from the capital, but at one point it housed as many 520.

“We believe that all human beings can change, can improve, so we don’t give up on them … I believe in forgiveness.”

Discretion is essential when speaking with Hussein: if details of Hussein’s work were made public, his facility would be vulnerable to attack by serving al-Shabab operatives.

All former al-Shabab members are supposed to be processed by the National Intelligence Security Agency (NISA), which hands those deemed to be of higher risk over to the Ministry of Justice for possible prosecution. The government has several rehabilitation centres for lower-risk adults, but none for minors like Abdi. Instead, children are placed in approved centres run by various NGOs, which provide education and vocational training.

But for the children, the lure of such benefits is offset by the fear of arrest. That’s why some former al-Shabab child soldiers choose to go to Hussein’s unapproved centre. That’s what Abdi did.

I asked Hussein how he felt about helping those who may have committed very serious crimes.

“Our mandate is to change minds, to take all the bad things they learned and replace it with something good,” he replied. “We believe that all human beings can change, can improve, so we don’t give up on them … I believe in forgiveness.”

Given the dearth of trained psychologists and mental health facilities in the country, I wondered what help, if any, is available for the former child soldiers. They often suffer from severe post traumatic stress disorder (PTSD). What could be done for Abdi and the other boys?

‘Focus on the future’

Over the years, Hussein said, he had seen first-hand the emotional and psychological trauma that violence has inflicted on the lives of Somalis. Recalling the period he referred to as the “rabshada” (the Somali word for “violence”, but better translated in this case as “the troubles”) he shared one experience that has stayed with him: Towards the end of 1992 – at the height of the civil war that had begun in the late 1980s and which simmers on to this day –  while living in the town of Marka, Hussein saw a dead man whose hands and legs had been tied together. The man was wrapped in banana leaves and plastic bags and his body was set ablaze. Later, Hussein learned that the man had been accused of stealing from a nearby farm.

There was a particular cruelty to the violence during the war, Hussein told me. But he quickly added: “I don’t want us to dwell on the horrors of the past … We must focus on the future and how we should help each other.”

This is a priority for Hussein, who tries to confront the trauma suffered by the stream of young men coming to his centre without the help of trained psychologists and psychiatrists. While he is a highly educated man, he knows that what the boys need most is something he cannot give them: medical diagnoses and professional treatment.

According to the Word Health Organization, as of 2017 there were only five mental health centres in the whole of Somalia, with just three psychiatrists working at those facilities. In the absence of genuine mental health assistance, all Hussein can offer the boys is conversation.

He uses a book titled “Trauma Healing and Reconciliation” to guide discussions with the boys on understanding what trauma is and how to deal with it. Most boys stay at his centre for six to eight months. That’s time enough for countless discussions, both one-on-one and in groups.

He also holds small, informal seminars on conflict management as well as a “gudi”, a traditional Somali practice of conflict reconciliation. “Because we have so many young men who have seen violence and trauma, they also use violence,” he said. “But we teach them how to solve their issues peacefully.”

In many ways, what Hussein does at his centre is what Somalia needs to do on a national scale. Since the end of the civil war, there has not been a sustained national conversation about trauma. Medical conditions such as PTSD are often not even acknowledged, much less treated.

Because we have so many young men who have seen violence and trauma, they also use violence.

Bader, from HRW, said it’s not only extremist groups such as al-Shabab that expose children to violence and exploitation. Most former child soldiers live in limbo, sometimes for years. Distrusted by society at large because of their former affiliation with al-Shabab and other extremist groups, they live in constant fear of being recaptured and of the threat of potential prosecution by the state. This makes them susceptible to further exploitation, sometimes by the very government that is supposed to help them.

A HRW report published earlier this year and based on interviews with former NISA detainees detailed a range of human rights violations against minors, including lack of due process, forced confessions, secret military trials, long periods of detention without charge, and, in a few cases, torture.

Bader added that “while torture or physical mistreatment in intelligence facilities is not systematic, it does happen”. She noted that many boys she spoke with in Mogadishu “had pretty bad physical marks from the torture they faced in NISA [facilities] in recent years”.

Although exact numbers of former al-Shabab child soldiers are difficult to obtain, the National Programme for the Treatment and Handling of Disengaged Combatants claims that since it was established in 2010, the programme, through its local and international NGO partners, has rehabilitated and relocated 2,000 former al-Shabab child soldiers back to their communities. As for Hussein, he said his centre had relocated almost 300 young men back to their towns and villages in the past year.

There are, however, countless other former child soldiers who have not gone through any formal or informal rehabilitation centres; untold numbers who have witnessed gruesome deaths, violence, and trauma. That many emotionally traumatised young men create a security and economic time bomb in any country. But for a country like Somalia, one of the poorest nations in the world struggling to recover from decades of civil strife, the consequences when that ticking time bomb goes off may be disastrous.

*Reporting for this story was supported by a grant from the Pulitzer Center.