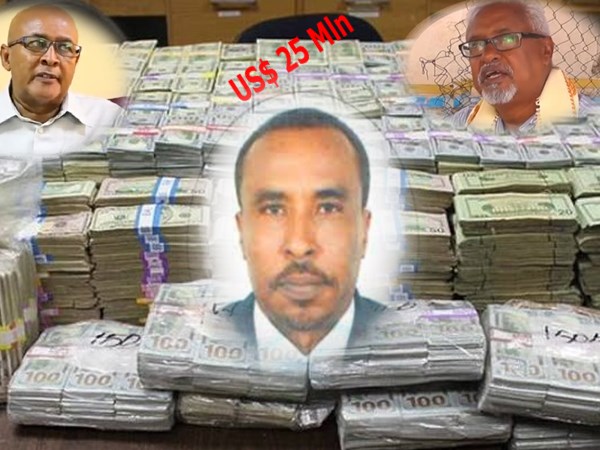 A highly controversial book that a former minister launched in Hargeisa, Somaliland, last week, accuses one of the most prominent businessmen in Somaliland of using clan muscle and bribery to promote his business and political ends.

The book written by the former Minister of the Presidency, Hersi Ali Haji Hassan, presently one of the leaders of Waddani opposition party, accuses Mohamed Aw Saeed Gheddi (MSG), who, also, has extensive business interests in neighboring Djibouti whose nationality he also holds, of using clan muscle and bribery in at least four references in a book he called ‘From the bush to the Presidency’. Due to, largely – as critics put, its dubious content, an overdose of narcissism, distasteful 0‘revelations’, and poor style and language, however, the book is becoming notoriously known on the street as ‘The Hersigate’.

In another reference, the writer, Hersi, narrates a dinner which Mr MSG called him to at which Mr Musa Bihi Abdi was present in August 2010 – only a month after President Siilaanyo took over the country’s helm. MSG, he said, tried to convince him to support Bihi in the next presidential elections which were, then, some two years off. Hersi intimates that Mr. MSG used all that was in his power – directly and indirectly – to make him see the benefits of supporting Bihi as president (p. 215).

Down along the same page, to hammer his bribery accusation home, Hersi says Waddani Chairman, Abdirahman Mohamed Abdullahi ‘Irro’, later, told him that MSG offered him TWENTY MILLION US Dollars to keep him (Hersi) out of joining Waddani party. This, the writer says, was after he refused to support Musa Bihi and walked out of Siilaanyo’s government with another 14 members of the ministerial council and around seven more officers holding very high positions in government in an attempt to disgracefully bring his 80-year-old former boss and mentor, Siilaanyo, to his knees (p. 215).

Immediately following this astounding, highly improbable revelation, Mr. Hersi says the Deputy Chairman of Waddani, Mr. Abdulkadir Haji Ismail Jirdeh, also an MP in the Somaliland parliament, told him that MSG offered him FIVE MILLION US Dollars, too, to keep him out of Waddani (p. 215).

The last two references, obviously, aimed to highlight, critics were quick to point out, how highly Mr. MSG, Musa Bihi and other Kulmiye leaders rated Mr. Hersi’s political influence, not truly calculating what TWENTY-FIVE MILLION could buy – if at all used – for any political party here or elsewhere, or that he may not be worthy of a fraction of said amounts in any scale, grossly over-rating himself.

Bribery is acriminal offence punishable by law. The giver draws as severe a sentence as the taker. So far, it is not clear what steps the two leaders of Waddani implicated in the allegation or Mr. MSG, himself, would take to clear their names in the reported, sordid communication which transpired between the two sides as reported in The Hersigate.

It remains to be seen whether the people named in this scandal would follow it through by taking Mr. Hersi to a court of law or leave it as a scar to hound him out of all public appearances in the future branding him as a liar and a tall tale story-teller. It is not known, yet, if the Waddani leaders named in the bribery attempts would challenge the ‘facts’ Mr. Hersi narrate on their behalf.

Either way, political observers are coming to believe, Hersi’s overdone subjectivity and the indefensible claims he throws left and right in his book leave the man’s brief career in politics irretrievably dead – caput.

Download a PDF copy of  Hersi’s book here: From the Bush to the Presidency