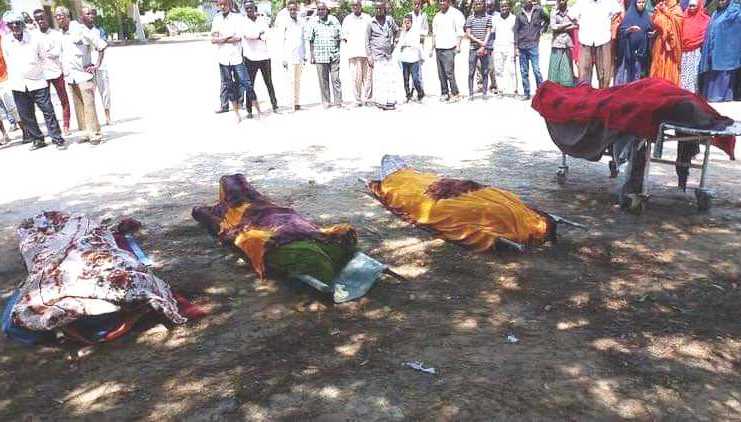 Reports from the area state that Al-Shabaab fighters detonated a roadside bomb on a convoy of AMISOM troops but did not,  as claimed, confront them on a face-to-face firefight passing by the ex-control checkpoint, which is now, way inside the city parameters, this morning.

Following the detonations, obviously, the Burundian troops, thought  Al-Shabaab wished to both create a mask of smoke and dust and to try hit some of the AMISOM vehicles directly.

Trying to keep invisible – and perhaps, non-existent – fighters at bay, the AMISOM troops, opened fire at all directions during which at least four civilians were fatally hit. The dead were all drivers of taxis and passenger vehicles who used a nearby depot as a station. Their names were given as:

Reports do not say how many more were injured in the exchange or how each of the engaged sides suffered.

Following the costly incident, residents of the area spontaneously reacted burning tires, blocking roads and shouting epithets against what they termed ‘an ineffective government’ which failed to protect civilians from its ‘protectors’. Al-Shabaab, of recent, is becoming bolder by the day relying on a ground support it has apparently succeeded build in Mogadishu and outlying areas tightening a tactical pressure on Villa Somalia which, they hope, would convince the international community not to sink more money on a ‘losing battleship’ that is the Farmajo-Khayrre government.

Targeted killings, car bombs and military engagements which had, hitherto, been a daily occurrence some distance from the federal capital seem to have homed in on the government seat despite the formidable presence of AU-supported, internationally approved forces thickly patrolling the area.