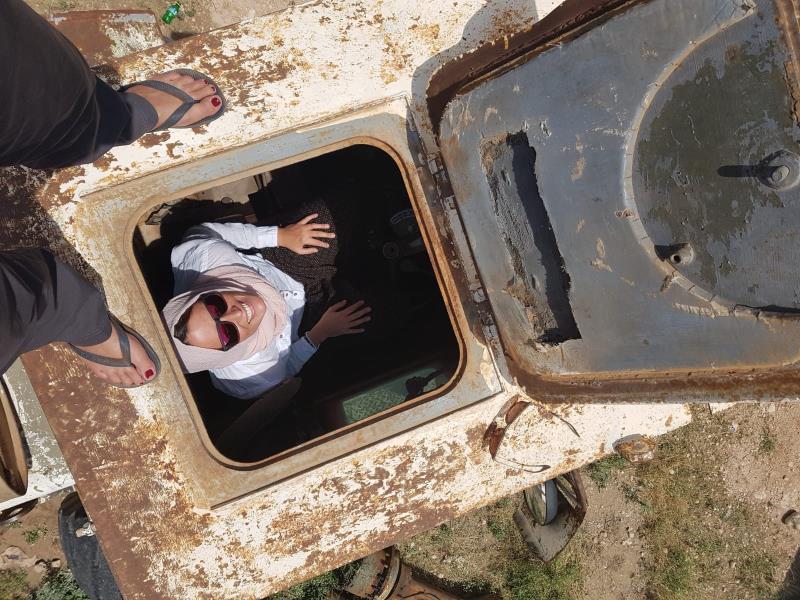 AMANZIMTOTI-bred Gemma Welsh (31) is impacting lives and making waves of change through her work in Somalia, where she aids the community’s hopes of restoration and growth through her Halo Trust work.

The qualified accountant, who moved to the UK a few years ago, has always been passionate about helping and through this work, is fulfilling her calling.

Gemma joined the Halo Trust in July as programme finance manager in Somaliland. She previously worked and qualified as an accountant within various sectors. The Halo Trust has operated in Somaliland since 1999, conducting manual and mechanical mine clearance, battle area clearance, explosive ordnance disposal, physical security and stockpile management, and mine risk education.

Somaliland is a self-declared independent state, unrecognised by the UN and its member states. Somaliland is located in the north-west region of Somalia. Gemma supporting the local economy and socialising with the locals in Hargeisa, Somaliland.

“Following decolonisation by the British and Italians, the Somali Republic was formed on 1 July, 1960 through the union of the former British Somaliland protectorate and Italian Somalia,” explained Gemma.

“Following a military coup in 1969, the country was ruled by Mohamed Siad Barre who led Somalia into a disastrous war with Ethiopia over control of the Somali Ogaden region in 1977, in which Somali forces were defeated and landmines were laid along the length of the border.

A period of civil war and the lack of a functioning government for over 20 years led to descriptions of Somalia as a ‘failed state’. Somalia now has an internationally recognised government and is slowly recovering control of the country from Al-Shabaab, the radical Islamic insurgency, together with help from African Union troops.” Gemma explained her long-time passion for helping others.

“I used to volunteer and work at a horse rehabilitation farm for horses rescued by the RSPCA. I have helped out in nursing homes and in government hospitals. When I moved to the UK, I volunteered in supporting young children who had been taken into social care and went through traumatic experiences,” she said.

Following decades of conflict, Somali communities are still facing threats from landmines, improvised explosive devices (IED) and unexploded ordnance across the country. Widespread instability and dangerous operating conditions for NGOs has meant access to the remote communities most severely affected by these issues has been impossible until recently, often because of mines and IEDs laid along roads. Landmines and other explosive remnants of war continue to kill and seriously injure ‘at risk’ civilians. The livelihoods of thousands of Somalis, some of the world’s poorest people, are affected. Landmines prevent land from being cultivated, foraged and grazed, and block access to water, markets and other vital services. Those displaced by the fighting are also prevented from returning home. In addition to these threats, the prevalence of unexploded ordnance and munitions stockpiling present further threats to life and livelihoods in communities across Somaliland.

Halo began non-technical survey operations along the Somali-Ethiopian border in 2015, and full clearance activities in June 2016. Working primarily in the newly formed states of Galmudug, Hirshabelle and Southwest, Halo has found 114 minefields and contaminated battle areas and over 350 unexploded ordinance (UXO) tasks left over from the Ogaden War and the after-effects of the Somalia civil war. To date, Halo’s combined teams have cleared 282,892-square metres of hazardous ground. “I wanted to change my career and incorporate the passion I have for helping others, so when scrolling through social media I found an article on Halo Trust and started to read. I took a massive interest in the work they were doing for local communities and I knew I wanted to be part of it and applied for a vacancy advertised,” she said.

Halo is proud to be the first humanitarian organisation to perform major clearance operations in southern Somalia. However, Somalia is a challenging environment and gaining access to contaminated lands remains an issue. Surveys continue to find more contamination, and Halo is working to build community trust so they can continue clearing land safely and effectively. Gemma Welsh with Senior Operations Officer, filed to the mines.

The selfless woman feels extremely proud and honoured to be part of this organisation.

“I have complete admiration and respect for my team here in Somaliland, because of the selfless decisions they continue to make every day,” she said in her correspondence with the Sund. “The Somali community have humbled me through their helpful and caring nature. They have shared with me their history and inheritance, educated me on law and politics and welcomed me to their country.”

As of 1 November 2017 Halo has cleared 23km² of hazardous area and conducted over 1,000 community visits to destroy munitions. Teams have disposed of over 4,570 landmines, 33,100 items of unexploded ordnance and 215,000 items of small arms ammunition. This has directly secured the safety of over 51,000 people who use the cleared land and roads. A further 60,000 people, who use them infrequently, have also benefitted. Golceed Minefield – Gemma Welsh with deminers at a camp.

Gemma explained that she manages the finances for both of Halo’s programmes in Somaliland and Somalia, which currently covers five locations.

“Alongside heading the finances, my main responsibility is to provide leadership and management to the finance team across both programmes, including training and capacity development of the national staff and expats,” she said.

When asked about what lies in her future, Gemma explained her initial assignment is for an 18-month period from July 2018 in the Horn of Africa.

“However, this can be extended or there is the possibility of moving to another programme within Halo,” she said. “In the future, I am very interested in the operational side of things with Halo and hope to undergo training once I have for fulfilled my role as programme finance manager in Somaliland and Somalia.”