The Maroodijeeh Regional Court banned publication of Foore newspaper and fined it an equivalent of US$ 300.

The paper was charged with sedition and the publication of fake news intended, as the prosecution put it, to incite the public against the President and his government.

In March 2018, about four months into his five-year term, His Excellency the president of the Republic of Somaliland, Musa Bihi Abdi, started building a perimeter wall around a twenty-block land on the western outskirts of the Hargeisa city proper. Not so officially at first, the rumors filtered back to the public on two contradicting versions. One said the President was building a presidency moving the present, city center quarters to the suburbs. The other version contended that, since the President was the first President to come to the presidency as a property owner with many buildings and farms to his name in and around Hargeisa, he sequestered the land in order to later turn it into a privately developed property.

Foore took middle stand, leaning, however, in a series of articles it started on the project, towards the latter subliminally.

The articles implied that the President had, definitely, ulterior motives to the project. It pointed out – coming back to the theme again and again – that there were many other cares which deserved immediate presidential attention. It postulated that critical areas such as education health, water, animal husbandry and roads could use resources to be squandered on a project that was neither necessary nor located at the right place.

The government saw the publications as an intentional, opposition-driven vilification campaign against the President and his government.

“This looks like a revenge move. Foore is, definitely, bearing the brunt of wrath that could have, perhaps, suited elsewhere,” the General Manager, Abdishakur Sheikh Abdiwahab, stated after the sentence came out.

Abdishakur said the sentencing was the product of an undue pressure the government exerted on the bench.

“If there is unfair targeting, this is a classic example,” he added. 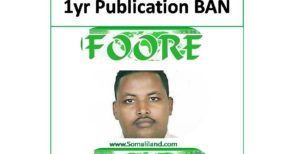 Mohamed Mohamoud ‘Ilka Asse’, editor-in-chief of the paper, was briefly detained at the CID cells and let go after the fine was settled some four hours after lock-up.

“The sentence is not legitimately based on punishable offenses but rather draws on perceived ‘personal attack’ making it appear as if we had an axe to grind against the President and the way he started his reign which is neither true nor had ever been our intention,” he said.

The Somaliland Journalists Association called the ruling an indication of intolerance to the independent press on the part of the government.

Foore is not the first newspaper whose offices the government banged shut. Haatuf  and Hubsad, to name but two have yet to re-open since they were closed down by the former government.

Public criticism revolving around the uneasy government-independent media relations does not always negatively focus on government. Ill-trained or adversely motivated practitioners promoting personal agendas abound among practitioners, critics point out. Some press outlets managers and ‘journalists’ have often been found guilty of excesses in defamation, sustained libel, intentional sedition and the divulgement of army and state secrets for personal gain or vendetta.

“The principles of press freedom and the right to information dissemination must draw a line between what is legit and what infringes on others rights or compromises the state,” many have often advised upcoming practitioners at various functions.

For an industry that ill pays its employees and adherents, the lure to use the pen for purposes other than impartial news practice is often stronger than inherent risks.