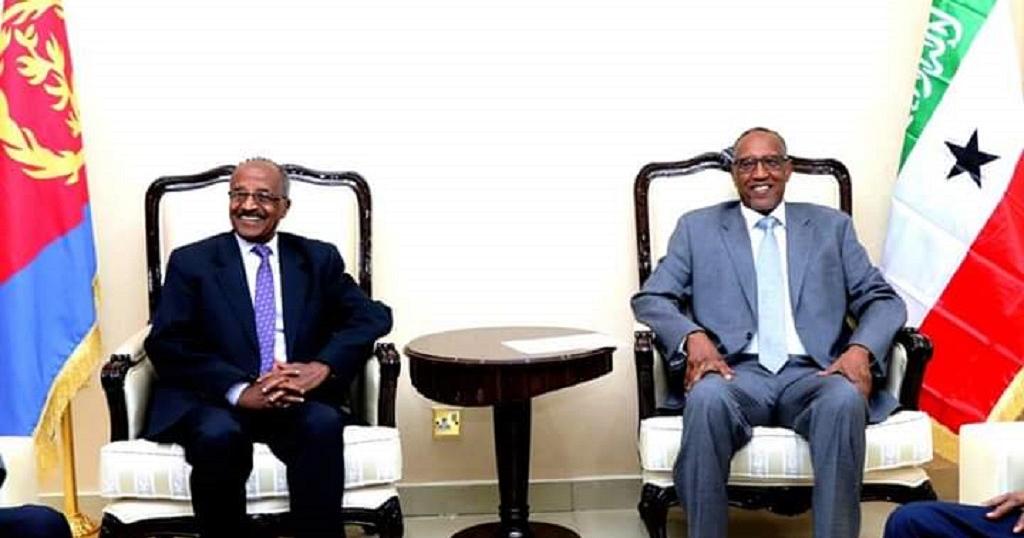 Somaliland courtship of its regional neighbours continued as fresh push for Kenya to enter into stronger ties continues.

Eritrea became the latest country in the region to enter into working relations with Somaliland after Ethiopia signed deals linking her to the Port of Berbera.

A government delegation from Eritrea was in Hargeisa, capital of Somaliland for talks this week.

The delegation, the first ever from Eritrea to visit Somaliland, was led by Foreign Minister Osman Saleh, who was accompanied by presidential adviser Yemane Gebreab.

After the meeting President Bihi tweeted: “Met with the FM of Eritrea Hon. Osman Saleh. We discussed issues pertaining the bilateral relations between the two nations, regional economic integration.”

According to Meskel, The objective of this first-ever Eritrean Government delegation visit to Hargeisa is to begin engagement with Somaliland and to buttress the quest for the promotion of regional peace.

In his remarks, FM Osman Saleh said: “We are sent by our president, Isaias Afwerki, at least to know the situation – what is going on in Somaliland. We have been away from the situation in the Horn of Africa for the last twenty years because we had a very bad situation.

“A war was waged against Eritrea by TPLF regime and later it was followed by the sanctions on Eritrea and we were struggling to be free from all these subjugations.

“No, at this moment, peace has prevailed in the Horn of Africa especially between Ethiopia and Eritrea, and now we have started our cooperation, so we said now we have been away and now it is time for us to go to Somaliland and look into the situation.

“We have a meeting with the president and we had his briefing, very interesting, very important and also we tried to say that we wanted to know the situation.

“So he explained all the political, the social and the economic situation of the country and now we will go back what we call the situations prevailing in Somaliland to my president,” he told reporters.

Bashe Omar, the Somaliland ambassador in Nairobi says the government of Kenya needs to join Ethiopia, Somaliland and now Eritrea to form a strong economic bloc.

“Ethiopia is the fastest rising economy in Africa, Somaliland offers so much investment and trading opportunities for Kenya and its neighbours and I think the country needs to join in,” Bashe said.

“Everybody is now asking; where is Kenya in these growing partnerships,” he added.

Eritrea, now on good terms with Ethiopia, hopes to get a share of the cake from the emergence of Somaliland as an economic hub.

The expansion of Berbera port by the DP world and the involvement of Ethiopia in the deal are enticing to Eritrea.

Ethiopia owns 19 percent shares in running the port with Dubai company DP World enjoying the giant share of 51 percent and Somaliland having 30 percent.

The Berbera port expansion is designed to equip the Somaliland port for major vessels and transform it into one of Africa’s pre-eminent facilities.

It is planned to be built on an 800m² area in two phases. Phase 1 estimated to cost US$232m, will sit on a 400m² area and accommodate two vessels at any given time. Total investment of the two phases will reach US$442m.

There is also the construction of a 250km dual carriageway between the Somaliland Port City of Berbera and Ethiopian border, to be funded by the UAE and the Abu Dhabi Fund for Development Construction Company.

The ground breaking ceremony was held last month by Somaliland president Musa Bihi, who said the investment would “bring economic stability and create employment opportunities for our youth”.