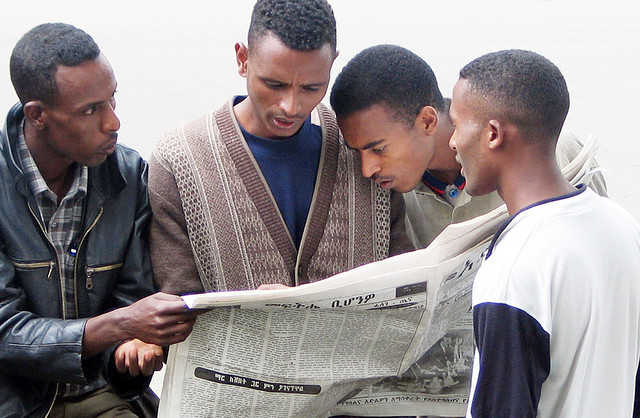 It’s been one year since East Africa’s most populous country – Ethiopia – experienced a political transformation; a change in leadership, after years of social unrest and demonstrations.

Prime Minister Hailemariam Desalegn unexpectedly resigned, leading to the appointment of Abiy Ahmed, a representative of the country’s largest ethnic group, the Oromos.

The reforms came swiftly. Abiy packed his cabinet with a record number of women, he promised to address the social tensions among Ethiopia’s multiple ethnic groups, and he forged an historic agreement to end the 20-year standoff with neighbouring Eritrea.

Changes came quickly in the media realm as well. Dozens of new news websites appeared, more than 20 new media publications are now in business, and numerous journalists, jailed and stifled under Hailemariam and his predecessor, have been freed.

But there’s still a long way to go.

“We are dealing with a country that is in its own twilight zone. The transition is in many ways very fragile,” says Tsedale Lemma, editor in chief, Addis Standard. “If you wanted to have a request for an interview with the prime minister, you don’t get that opportunity. We see more and more government officials using the social media which makes them directly accessible to people … However, I’m very disappointed that the distribution of this information is highly choreographed … So it’s very frustrating that we’re limited into the kind of information, government authorities want us to hear.”

Ethiopian media have years of control and censorship to break free of, and outlets there are still working on forming professional bonds to strengthen their industry.

“Media houses need to come together, discuss what should be, how can we help the transition without compromising our journalistic principles. If we do that, we can help but, but expecting the media to not take sides, not to advance certain interest is just not realistic,” says Jawar Mohammed, founder of Oromia Media Network.

He says that one year into the Abiy era, “there is still doubt whether the country could make it to democracy or whether it will fall back to dictatorship, or whether it actually will get worse and go into war.”

Tamrat Giorgis is the managing editor of the Addis Fortune newspaper, a media mainstay that reported throughout the 2018 revolution and transition. But according to him, it’s a very, delicate, sensitive, highly emotional kind of contestation awaiting this country.

“The media has continued to be an instrument of power, the instrumentalisation of the media continues. When so many things are on the balance … What do people want from the media? They want the media to be a force of verification. A force, a place, a platform for rational discourse,” says Giorgis.

Last year, we spoke with four journalists of different media backgrounds about the role social media played in the political transition. Now, about nine months later, we’ve gone back to those voices to see how the news space is developing in Abiy Ahmed’s Ethiopia.

The Mysterious Disappearance of Two Indian Tourists in Kenya