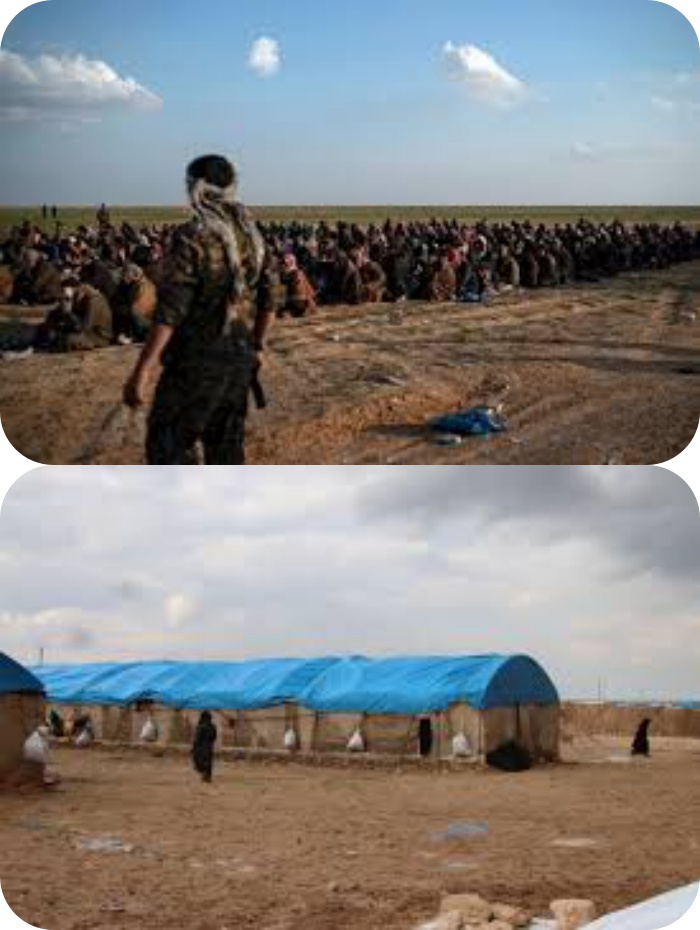 Dozens of European citizens of Somali origin who joined the Islamic State terror group in Syria and Iraq want to go to Somalia due to European countries’ reluctance to take them back.

Through their parents, the so-called Islamic State brides and their children have urged the Somali government to take them in.

VOA Somali service’s Investigative Dossier program has obtained the list of 23 women and 34 children who are now being held at al-Hol camp in northern Syria.

The relatives say the IS brides have expressed “regret” and accept they made a “mistake” in leaving Europe to travel to Syria.

Some of the women have lost their European citizenship. Nasra Abdullahi Abukar is one of them. She left London’s Lewisham Borough on June 3, 2014 and travelled to Syria. In October 2017 the British government revoked her citizenship.

Her mother, Kaha Gure Hassan, says her daughter was born in Somalia and wants to go there to live with her father.

“I appeal to the (Somali) president, Mohamed Abdullahi Farmajo, and Prime Minister Hassan Ali Khaire and the Somali people to get those children returned,” Hassan says. “If they rescue, we will take responsibility for her.”

Hassan says her daughter was not a religious person.

“She used to wear trousers and was not particularly connected to a mosque,” she told Investigative Dossier. “She was groomed [recruited] through the internet.”

Seven days after leaving London, Abukar called her mother and told her she went to Syria to “help the women and children” of Syria.

Hassan says within a year her daughter “regretted” the move and wanted to return to Britain.

“My daughter was not a free person, she was afraid when speaking on the phone,” Hassan said.

The mother of five is now appealing to the Somali government to take her to Somalia where Abukar’s father lives.

On September 9, 2014, a family of four caught a flight from Frankfurt, Germany to Turkey. Two sisters, their brother and his pregnant wife flew to Istanbul and then proceeded to Syria.

Their father, who lives near the town of Mainz, was in Denmark attending a wedding when they traveled.

His son called him three days later from Turkey and assured him they would return, but the father was not sure he was telling the truth.

“I plead with him to at least return the children,” says the father, who did not want to be named. By “children” he means the two daughters who were 14 and 18 at the time. Their brother was 23.

Within six months, the two sisters married jihadists, and their brother was killed.

The younger daughter, who is now 22, has married three jihadists in all – two Somalis and an Eritrean.  All three were killed in Syria’s war. She had a child with the Eritrean jihadist and twins with her last husband.  The twins died shortly after birth.

The two in-law families from Germany and Denmark now want the widows and orphans rescued from the refugee camps.

“These were just housewives, they are destitute, sick due to lack of health support,” says the Somali-German father. He says his younger daughter recently had anemia and was ill for a week.

“They were not participating in fighting,” he said. “They are desperate to be rescued; nothing else is in their mind. They were brainwashed.”

Ayni is another IS bride who lost two husbands in the war in Syria. She has arrived in the al-Hol refugee camp after fleeing from the town of Baghuz in March this year following heavy bombing.

Ayni traveled with a group of girls from Sweden in May 2014. She was preparing to get married when a man changed her mind and told her she is marrying someone who is not very religious, according to her mother Saido.

He not only changed her mind about marriage but convinced her to “migrate” to Syria. The two married in Syria and had two children before he was killed in a bombing in October 2017.

Months later she married again and had a third child but her new husband was wounded and captured by allied forces.

“Their survival depended on marrying men as a safety guarantor,” says Saido.

Saido says her daughter tried to escape the group but found no safe way out. She alleges Kurdish forces raid and confiscate mobile phones and money from the women. She says her grandchildren are malnourished.

“Who are these women?”

Somali government officials say they have received the list of Islamic State brides and their children in al-Hol camp, but have not yet made a decision on whether to make an offer to them.

Somalia’s ambassador to the European Union, Ali Said Faqi, who has been in touch with the families says the Somali government is investigating the situation.

“We are investigating, we need a full information,” he said. “Who are these women? There are Somali men [in Syria] who had children with foreign women, they want their children to come here too. This is complex, it needs careful consideration.”

Former intelligence officer Colonel Abdullahi Ali Maow says the Somali government should exercise “caution” and make sure they do not get released to the community until they are thoroughly rehabilitated.

But Ambassador Faqi sees a way out for them if they are sincere about renouncing their jihadist ideology.

“If someone with a terrorist organization renounces the government welcomes them, at this time; they will fall under this category,” he says.