The Somalia administration at Villa Somalia, Mogadishu, announced that it has cut all diplomatic ties with the West African Republic of Guinea.

At a press conference the Foreign Minister of the international community established called today, Thursday, Minister Ahmed Awad proclaimed from that moment on Somalia had ceased diplomatic relations with Guinea.

“I wish to apprise the Somali nation that the Federal Government of Somalia has from this hour on severed relations with the Republic of Guinea whose capital is Conakry,” Minister Awad said.

The Minister reasoned that Guinea, ostensibly, compromised unity and sovereignty of Somalia were compromised.

“We have taken that step because that country violated the sovereignty and unity of the Somali nation,” he said.

Minister Awad, showing signs of distress, went on to reveal a sore point of Somalia with the international community.

“Countries that have similarly encroached on the sovereignty and the unity of Somalia have been on the increase of late,” he said.

“We have arrived at a juncture of time that the world be told that the Federal government and the people of Somalia will no longer tolerate any violation to its nationhood, unity, sovereignty and independence,” Minister Awad haltingly stated.

“Using the media,” he went on to add, “we wish to convey to the Somali people that the federal government stands for the protection of its sovereignty, nationhood, unity and independence”.

Perhaps doubtful of how the step his government has taken will be received by the public, he went on to say that any decision which his government reaches is based on safeguarding the unity and sovereignty of the Somali nation.

Minister Awad was careful not to go to any details what where exactly the harm was, or what the Republic of Guinea did to violate Somalia independence or sovereignty and its unity.

He did not have to say, however, that Somalia was jittery about the outcome of the state visit His Excellency the President of the Republic of Somaliland was paying to Guinea at the moment.

Somalia feigned indignation on Guinea follows a string of other protest letters which targeted relations between the Republic of Somaliland and international and regional organizations and governments, including Kenya, the UN and the EU.

Somaliland has, in 1991, restored an independence it sacrificed for an ill-fated union with Somalia in 1960 as Somalia plunged into chaos after the fall of the brutal, despotic military region of General Siad Barre following a protracted, costly war Somalilanders against it for nearly a decade. 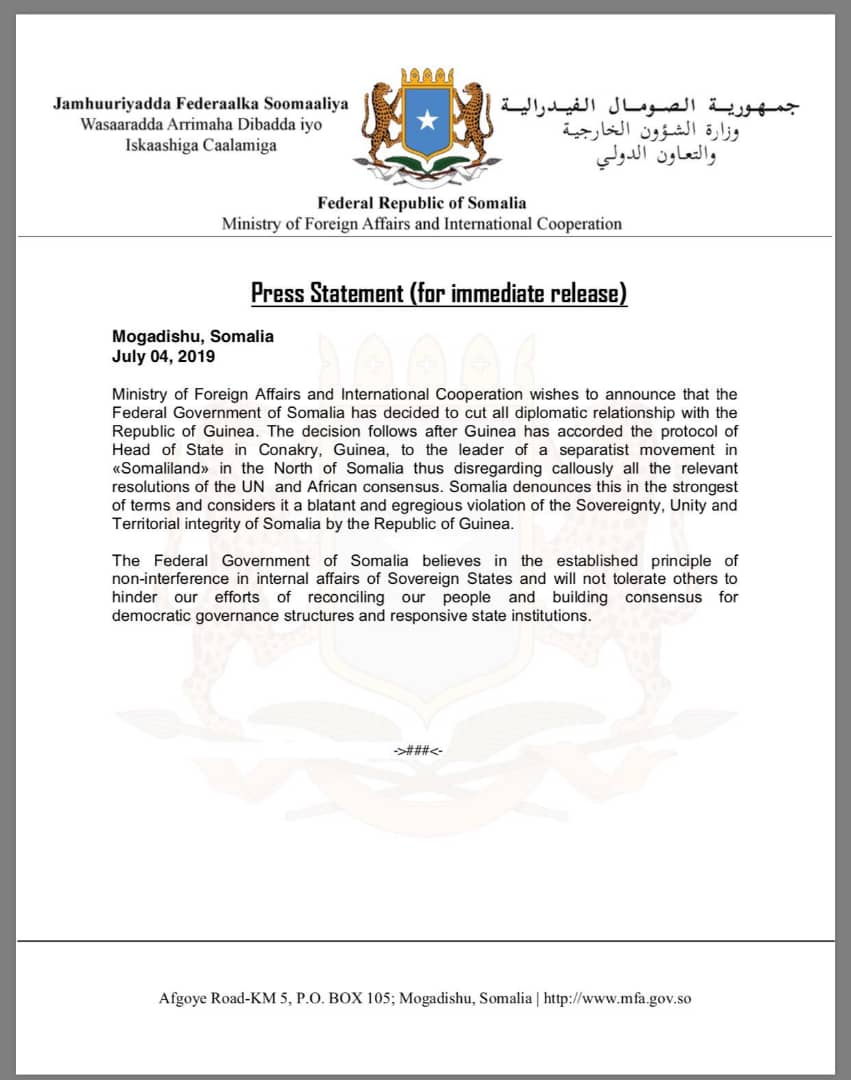 Somaliland in another diplomatic breakthrough with president’s visit to Guinea