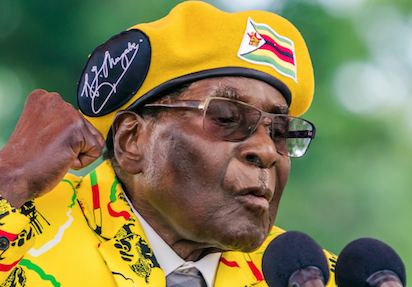 The Zimbabwean ex-President, Robert Mugabe, will be remembered for his great wit and his colourful language.

These are some of the raw, hilarious and unforgettable ‘Robert Mugabe quotes’ :

1) “When your clothes are made of cassava leaves, you don’t take a goat as a friend.”

3) “When one’s goat gets missing, the aroma of a neighbour’s soup gets suspicious.”

4) “Treat every part of your towel nicely because the part that wipes your buttocks today will wipe your face tomorrow.”

5) “Sometimes you look back at girls you spent money on, rather than send it to your mum, and you realise witchcraft is real.”

6) “If President Barack Obama wants me to allow marriage for same-sex couples in my country (Zimbabwe), he must come here so that I marry him first.”

7) “Cigarette is a pinch of tobacco rolled in a piece of paper with fire on one end and a fool on the other end.”

8) Interviewer: “Mr President, when are you bidding the people of Zimbabwe farewell?”
Robert Mugabe: “Where are they going?”

9) Racism will never end as long as white cars are still using black tires; If people still use black color for bad luck and white for peace; If people still wear white clothes to weddings and black clothes to funerals; As long as those who don’t pay their bills are blacklisted and not ‘whitelisted’… But I don’t care as long as I still use the white tissue paper to wipe my ass! With that only, I will always be very fine.

10) No African girl will choose six pack over six cars.. So stop going to the gym and go to work!

10) “How do you convince the upcoming generations that education is the key to success when we are surrounded by poor graduates and rich criminal?”

11) lf Adam & Eve were Chinese we would have been in paradise because they would have ignored the apple and eaten thè snake.

12) A person can love you and still cheat, just like we love God and still sin.

14) Being kissed does not mean you are loved, ask Jesus about Judas.

15) “If I am given a chance to travel through time, I will go back to 1946, find Donald Trump’s father and give him a condom.