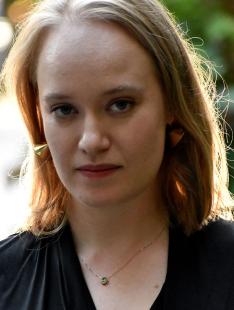 Transparentem forced a number of major Western brands, including Target, Nike, and Fruit of the Loom, to act on fresh evidence of labor abuses in their Malaysian apparel factories.

The nonprofit did so by taking an effective new tack. Transparentem asked the companies privately first about what it had uncovered, instead of rushing to shame them in the press, The Guardian noted in June. The result was companies committing to real change at the factories, rather than quickly severing ties with them.
One of the people helping pioneer this strategy at Transparentem is the nonprofit’s operations chief Rachel Jackson ’11. And it was at Princeton that Jackson, an Amherst, Mass., native, first became interested in finding more effective ways to bring about change.

A politics major at Princeton, Jackson wanted to know what allowed some war-torn countries to transition peacefully to stable governments while others failed. In her senior thesis, she planned to use Somaliland as a case study.

The breakaway state in the northwestern corner of Somalia had somehow managed to become a democracy, with power changing hands peacefully over several rounds of elections.

“I really wanted to go there and do research on why that was,” recalls Jackson. “I was fascinated by the story.”

But Jackson soon hit a roadblock. The U.S. State Department had issued a travel warning for the area and Princeton thesis rules barred research in such places without an exemption.

“I applied for exemption and was summarily denied,” says Jackson. “So I decided I was going to go anyway, which was not something my thesis adviser encouraged me to do.”

The then 20-year-old Jackson came away with an impressive set of on-the-ground interviews in Somaliland. They painted a picture of the important role that clan elders played in setting the self-declared state on a path to success.

After graduation, Jackson had a brief stint as a reporter before returning to Princeton as a researcher for the Woodrow Wilson School’s Innovations for Successful Societies program. There, Jackson continued her exploration of what brought about change most effectively, focusing on the reduction of election violence and improved forest protection, says the program’s director, Princeton politics professor Jennifer Widner, who also advised Jackson on her thesis about Somaliland.

In her work, Jackson demonstrated not only a commitment to “making the world a better place,” but also a desire to listen to what people said they needed and how they thought about their own situations, Widner recalls.

Three years later, however, Jackson was looking for a new way to make the world a better place, and at age 25, she was willing to take a risk. That’s when she met Benjamin Skinner.

The renowned investigative reporter was toying with the idea of forming a nonprofit group that would quietly document labor and environmental abuses at factories and trace them down the supply chain to major companies. Then, instead of giving the companies a matter of days to respond, as journalists often do, the group would give them months. Only then would the group issue a final report that included what actions the companies took to remedy the problems.

The goal was to genuinely give companies an opportunity to come up with a good solution as well as remove the ability for them to say they didn’t know about the problem, says Jackson who reviewed an early concept note for the nonprofit that Skinner had drafted.

“I think I read it immediately that night and said the next day, ‘This all makes sense to me. The incentives make sense. The model makes sense. I really feel like this will make a really big difference and I’m in,’ ” recalls Jackson.

She was Skinner’s first hire for what would become Transparentem. Neither had ever started an organization before.

“You sort of think about, ‘Well, what don’t we have?’ ” says Jackson, who set about getting the nonprofit’s operations off the ground. “‘OK, we need a way to pay people. We don’t have a payroll system.’”

Today, Transparentem has 30 employees across the globe, 17 of whom are full-time and based in the U.S. The nature of its business poses some unique challenges for its head of operations. Transparentem doesn’t publicly discuss its sources and methods. Jackson says she can’t even confirm whether Transparentem’s sources or investigators have ever been threatened or hurt.

“We work in a lot of countries where human rights investigations are incredibly dangerous,” Jackson says. “So we always need to make sure we are keeping our people safe while still getting the information we need.”