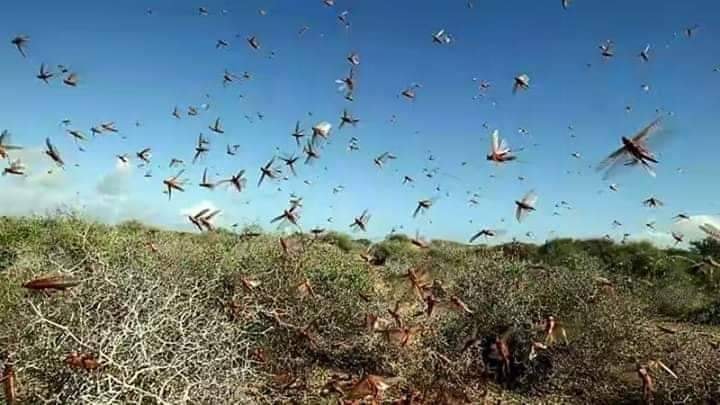 Ethiopia’s Ministry of Agriculture said it has begun preventive measures to control desert locust infestation in various parts of the country.

The desert locust swarms, who migrated from the Middle East through Yemen and Somaliland, posed a threat in Tigray, Afar, Somali and Amhara regional states, as well as Dire Dawa city administration.

Several vehicles, a team of experts and two aerial spray planes were sent to the areas to battle the invasion, Sani Redi, State Minister of Agriculture told journalists on Tuesday, 29 October 2019.

The operations being carried out to control the swarms by the youth in their respective areas are bearing fruit, he said.

Locusts, which can travel 60-70km in an hour and up to 300km in a day, consume most vegetation in their path.

The desert Locust reportedly destroyed grass and shrubs and standing crops in the eastern part of the country.

Plants Conservation Director of the Ministry, Zebdios Flato, told journalists on Monday, 28 October 2019, that the desert locusts have destroyed grass and shrubs on several districts of Tigray, Afar and Somali regional states since its appearance in September this year.

The desert locust has caused no serious damages on crops but ravaged grass and shrubs in east Amhara, South eastern of Tigray and eastern Oromia and Dire Dawa administration.

The relatively larger size and scattered population in Tigray, Amhara Afar and Somali regions has made the controlling operation difficult. The Oromia, Harare Dire Dawa administrations have teamed up in control the spread of the locust.

According to the Ethiopian Metrological Agency and the prolongation of the rainy season will create favourable environment for the desert locust to breed and spread to other parts of the country.