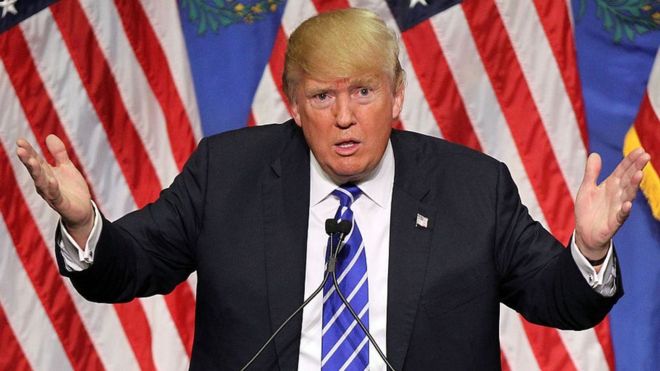 US President Donald Trump seems to think that he was overlooked for last year’s Nobel Peace Prize.

Why, what did he say?

“I’m going to tell you about the Nobel Peace Prize, I’ll tell you about that. I made a deal, I saved a country, and I just heard that the head of that country is now getting the Nobel Peace Prize for saving the country. I said: ‘What, did I have something to do with it?’ Yeah, but you know, that’s the way it is. As long as we know, that’s all that matters… I saved a big war, I’ve saved a couple of them.”

A video clip of him talking to supporters at a campaign event in Toledo, Ohio, on Thursday evening was shared on Twitter:

"I made a deal, I saved a country, and I just heard that the head of that country is now getting the Nobel Peace Prize for saving the country. I said, 'what, did I have something do with it?'" — Trump whines about not having a Nobel Peace Prize pic.twitter.com/PjVsZCkThY

Who was he talking about?

Although he did not name the Nobel Peace Prize winner or the country, it is clear that Mr Trump was referring to Ethiopian Prime Minister Abiy Ahmed. 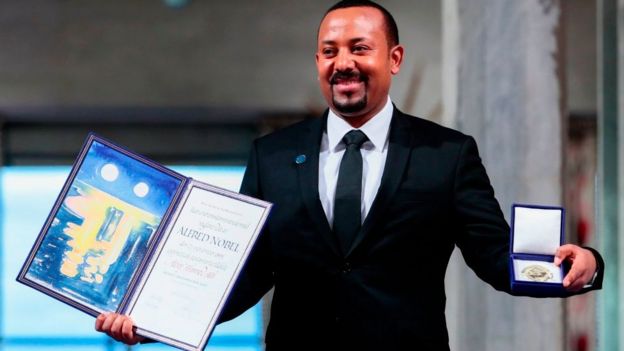 AFP. Mr Abiy has been praised for introducing a series of reforms

He came into office in April 2018 after months of anti-government protests forced his predecessor to resign.

Mr Abiy has introduced massive liberalising reforms to Ethiopia, shaking up what was a tightly controlled nation.

He freed thousands of opposition activists from jail and allowed exiled dissidents to return home. He has also allowed the media to operate freely and appointed women to prominent positions.

And in October last year, he was awarded the Nobel Peace Prize – the only head of state to win the prize since Mr Trump was elected in 2016.

Why did he win the Nobel Peace Prize?

The Norwegian Nobel Committee said Mr Abiy was honoured for his “decisive initiative to resolve the border conflict with neighbouring Eritrea”.

The two countries fought a bitter border war from 1998-2000, which killed tens of thousands of people. Although a ceasefire was signed in 2000, the neighbours technically remained at war until July 2018, when Mr Abiy and Eritrea’s President Isaias Afwerki signed a peace deal. So for two decades, the long border was closed, dividing families and making trade impossible.

The Nobel Committee said it hoped the peace agreement would help to bring about positive change to the citizens of Ethiopia and Eritrea.

Since the peace deal with Eritrea, Mr Abiy has also been involved in peace processes in other African countries, the committee said.

Did Trump help broker peace between Ethiopia and Eritrea?

Not really – the US’s influence in the peace talks was minimal. The United Arab Emirates, which has a lot of influence in the Horn of Africa, was key in helping to bring the two parties together, says the BBC’s former Ethiopia correspondent, Emmanuel Igunza.

The peace deal helped bring back Eritrea from the cold after sanctions were imposed in 2009.

The UN Security Council lifted the sanctions in November 2018, four months after the peace deal was signed.

Why did Trump make the comments now?

This is not clear, given that the Nobel Peace Prize was awarded on 11 October last year, and Mr Abiy gave his acceptance speech in Oslo, Norway, on 10 December.

Interestingly, Mr Trump has not officially congratulated Mr Abiy but his daughter, Ivanka Trump, who serves as his senior adviser, and the US Secretary of State Mike Pompeo have done so.

However, Mr Trump has publicly said he deserved the Nobel Peace Prize for, among other things, his efforts to convince North Korea’s leader Kim Jong-un to give up nuclear weapons.