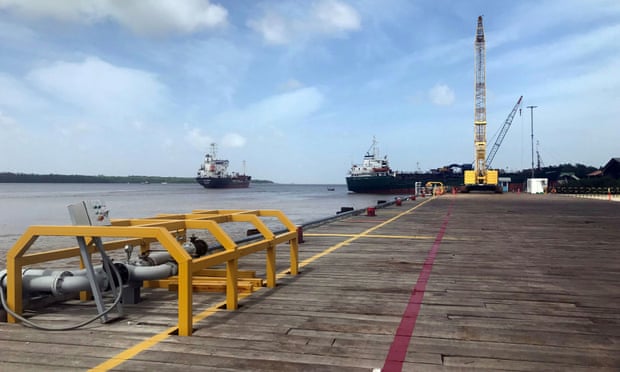 The World Bank is to pay for Guyana’s oil laws to be rewritten by a legal firm that has regularly worked for ExxonMobil, just as the US producer prepares to extract as much as 8bn barrels of oil off the country’s coast.

The World Bank has pledged not to fund fossil fuel extraction directly, but it is giving Guyana millions of dollars to develop governance in its burgeoning oil sector, as the south American country prepares for an oil rush led by ExxonMobil and its partners.

Guyana’s government was in charge of hiring US law firm Hunton Andrews Kurth to revise its Petroleum (Exploration and Production) Act, the environment and rights campaign group Urgewald found.

The World Bank reviewed the procurement and found no problems with the process. The Washington-based bank will fund the work with a grant worth $1.96m (£1.5m).

Hunton Andrews Kurth has acted for ExxonMobil for 40 years, including multiple cases involved in climate impacts, such as an action by native Americans in the Alaskan village of Kivalina who argued that the climate crisis was threatening their way of life.

“The World Bank claims to be striving for ‘good governance’ in revising Guyana’s legal framework for oil development,” said Heike Mainhardt, senior advisor on multilateral financial institutions at Urgewald. “However, they are hiring the law firm who counts among their major clients ExxonMobil – the company leading the oilfield development in Guyana.

“This is ‘good governance’ for the oil companies, not for the people of Guyana or the global climate. The World Bank is causing a conflict of interest, in effect undermining good governance.”

The World Bank has already faced criticism over its involvement in the oil sector. It garnered praise from environmental campaign groups in 2017 when it pledged to stop investment in “upstream oil and gas”. However, the Guardian previously reported it had earmarked $55m to improve governance in the oil and gas sector in Guyana.

ExxonMobil, based in Irving, Texas, announced in December it had started production off Guyana’s coast, less than five years after oil was first discovered there. At the end of January, ExxonMobil increased its estimates of the size of the discovery to 8bn barrels of oil equivalent. That made it one of the world’s biggest finds in recent years and a key part of ExxonMobil’s plans to extract more fossil fuels, even as other oil producers look at reducing their environmental impacts.

Rystad Energy, an energy consultancy, has said that Guyana’s oil production could reach 1.2m barrels per day by the end of the decade, lifting total annual oil revenues well above $20bn at current prices. The International Monetary Fund estimates Guyana’s GDP will grow by 85.6% this year – potentially transforming the lives of its 785,000 citizens, who voted in a new government this week.

ExxonMobil said it was “committed to the highest standards of business conduct” and that “any reports speculating or alleging the appearance of anything improper are baseless and without merit”.