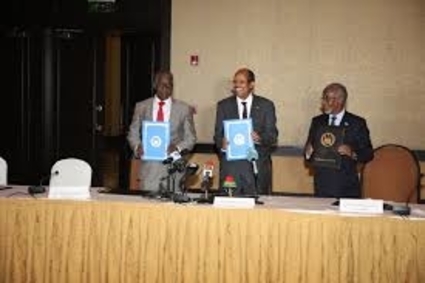 Somaliland and Somalia technical committee that convened in Djibouti for the past three days signed late last night a five-point preliminary agreement.

But the technical committee struggled to kick-start negotiations due to myriads of unsolved differences, a move that almost collapsed the talks at preliminary stages, leading to tensions among the organizers, who are keen to have the impasse solved.

Mahmoud Ali Yusuf, Djibouti’s foreign affairs minister, announced the five-point preliminary agreement and the significant progress in bringing the two countries on board after hours of misunderstanding, adding that “the talks will now start uninterrupted because we’ve solved the contentious issues”.

The five-point preliminary agreement that the technical committee agreed on include code of conduct and guidelines to future talks, confidence building, implementation of past agreements, and formation of three subcommittees which would look at aid, airspace, and security which will meet after 15 days.

Further, Djibouti minister added, a joint ministerial committee will meet after 45 days where it is anticipated that it will look at the recommendations from the three sub-committees before coming up with a tangible solution that would guide future relations between the two countries.

“We just have to be tolerant of each other. During mediation, differences emerge, parties disagree on certain issues but in the long run, we reach consensus. I want to thank representatives for agreeing to settle on preliminary issues,” he said.

Earlier, multiple sources had intimated that the talks were at a “difficult” stage.

Saeed Sulub, Somaliland’s minister for livestock, who is also among those in the committee, told the press that they “walked out” because the talks were “not fruitful”. He accused Somalia of being “unprepared” and “politicizing” aid.

During the first meeting on Sunday, the regional leaders agreed that Djibouti will host the technical committee from the two countries. Further, it was agreed that they should depoliticize investment and development besides implementing initial agreements that were signed in previous meetings.

The foreign minister of Somaliland, Yassin Faraton, speaking after the pact signed has said that the talks were a step that both sides took in the right direction.

On the other hand, Somalia’s Interior Minister, Abdi Mohamed Sabrie, said that the Somali government is committed to having a genuine dialogue with Somaliland in a bid to renew the superb ties between Somaliland. He added that the agreement signed shows the commitment of both sides to continue the talks in order to address the essence of the issues that are facing both Somaliland and Somalia.