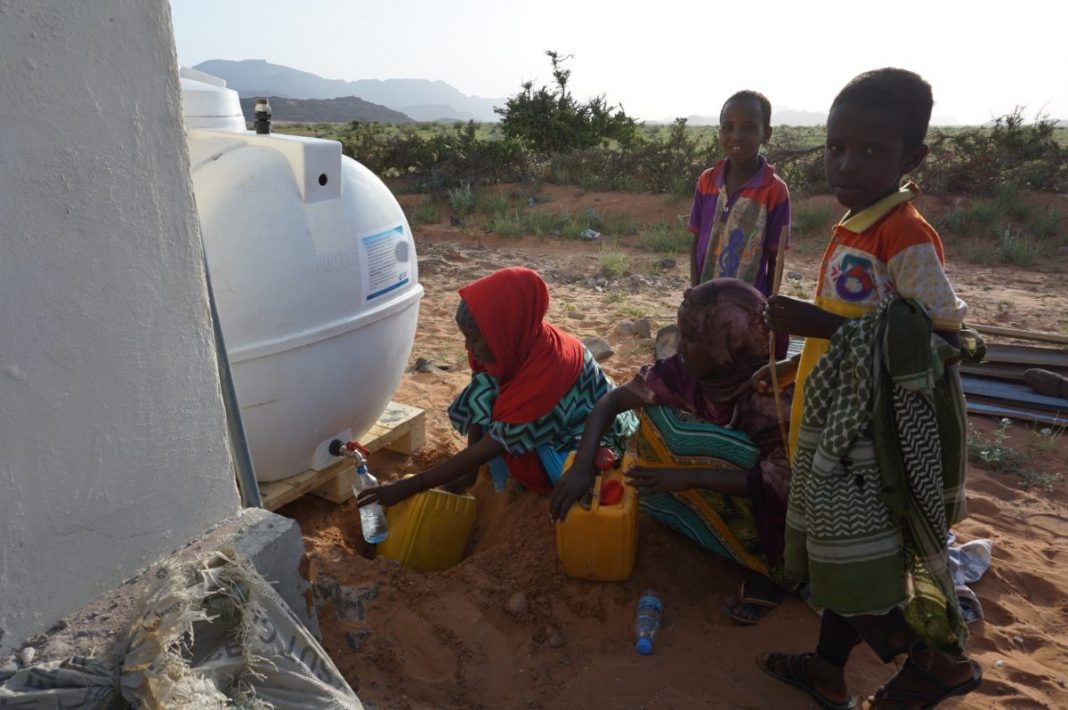 A solar array – complete with battery storage and remote monitoring and control capabilities – has been transforming brackish groundwater into fresh drinking water in the village of Beyo Gulan in the Somaliland desert since 2018. The installation was developed by Germany’s Phaesun. Its unique combination of low-maintenance electrodialysis desalination with PV saw it pick up an Outstanding Projects award from The smarter E. Phaesun’s Géraldine Quelle and Florian Martini say they are honored by the plaudits, and are readying the system for series production.

What does the Outstanding Projects award mean for what may seem on the surface to be a pretty small, offgrid PV project?

Géraldine Quelle (GQ): I think anything that puts a focus on the topic of water desalination and brackish water, as drinking water is important. And the focus on electrodialysis is good, because not much is known about the technology. And we are honored and proud. We were really surprised how many people are suffering due to drinking salty groundwater. And many people are simply not aware how many groundwater sources are salty.

Florian Martini (FM): To put the focus on this new technology is a good thing, because reverse osmosis [for desalination] is so well established and it is a big step for people to accept a new technology. Electrodialysis is a far better way to treat brackish water – and to give it international focus will help people to take this step toward adopting the new technology.

The Somaliland project, which is also featured on the cover of this edition of pv magazine, was the first of six, as I understand it. What is the current status of the RevivED Water project?

GQ: We started this RevivED water project four years ago – funded through the EU’s Horizon 2020 program. With our three partners we developed the project that uses the electrodialysis solution for brackish water purification. We first started work in 2016, the first pilot system was completed in 2017, and the first project in 2018 in Somaliland. Since then, we’ve installed six more pilot projects in Djibouti, Tanzania and India. The RevivED project comes to an end this month. But the projects themselves will keep on running and we can monitor and control them remotely.

So, what are the advantages of electrodialysis?

FM: There are many advantages over standard technologies such as reverse osmosis in that it doesn’t need high pressures or high temperatures. This is the issue where there often are problems with reverse osmosis, it is high maintenance. By contrast, electrodialysis has very low maintenance.

GQ: The former R&D activities of our partners focused on the desalination part, and Phaesun brought the application into the field. Before that we had been testing it in laboratories, but we added the solar power supply and tested it in the field. Most importantly we used it in real applications.

What kind of solar system is used?

FM: The system is a 600 W PV system [for each electrodialysis unit]. We used two 300 W solar modules to create a 24 VDC system – using two solar batteries with 1,400 Wh each, connected to a standard solar charger. It is a pretty standard offgrid solar system. The solar, battery and electrodialysis control box is integrated in the desalination system. The control box we developed, and at present it is still produced manually. Series production will be the next step. You mention the control box – why is that important?

GQ: We have a remote monitoring and control system, which means we have remote oversight and control from anywhere in the world.

FM: The systems are installed in remote regions – the Somaliland site is 10 hours drive through the desert from the capital Hargeisa. Maintenance is really hard. We have the experience that 80% of failures can be fixed remotely – so we can see directly when something is going on and can interact directly with the system.

GQ: This is especially important for these pilot runs.

FM: That’s because there were a lot of issues in the very beginning and we could monitor them and fix the failures and just act. When we couldn’t fix the problems remotely, we could send spare parts.

What local partners did you have?

GQ: There is a solar company, the Kaafi Horn Renewable Energy Company, in Somaliland that helped us with identification of the location, the imports and installation and from time to time maintenance – but they are located 10 hours away from the village.

FM: Our partner is our main contact and can help if there is bigger repair work. We also have a ‘watchman’ in the village itself. He receives a monthly salary to take care of the system. We provided him with a cell phone with WhatsApp and I am directly in contact with him.

GQ: The nice thing is that there is mobile internet and that is essential for the monitoring system.

FM: The coverage in Africa is almost better than in places like Germany – it is only 2G, not 4G, but this is enough for our system.

FM: It really is the modem itself and then we have a CPU there – it is just a Revolution PI, a common CPU with a lot of inputs and outputs, analog and digital, so we connect a lot of sensors to the CPU and then sync it to the cloud platform.

Florian, you visited the site. What was the reaction to the new water source?

FM: I have been to Beyo Gulan twice, once for installation and then again one year later. Before installing the system, I was a little scared as to whether people would accept the technology and water – because they have been drinking salty water for generations. And now they have clean water with no taste of salt. But from the moment I arrived I was received so well. I was almost surprised that people were really happy with the water.

What kind of volumes can the system actually produce?

FM: The generation-one system supplies 300 liters a day, but the new generation four, which was sent this month, produces up to 2,000 liters a day. When we consider around 5 liters of fresh water is required per person for consumption, not for animals or for washing, then it is enough for the community.

How widely could a system like this be used?

GQ: It is possible to use the system anywhere in the world. It does depend on the feed water – electrodialysis is for brackish water not sea water.

And in how many locations rely on brackish water like this?

FM: There are too many to count.

GQ: You have brackish water in the groundwater in desert areas and also coastal areas. There are many, many places in the world.

FM: In fact, 16% of the earth’s surface is affected by salty groundwater. Some can import water or use rainwater, but it is a major issue and getting worse due to rising water tables.

FM: It is important to remember that in many places those that can afford it pay for trucked or bottled water, but those who cannot must drink the salty water. Well the development RevivED Water project has come to an end. What are the next steps, if there is this demand as you describe?

GQ: We have developed different scenarios. On one hand there are lots of potential customers like NGOs or government institutions like water authorities – and they are looking for technologies for water desalination. On the other hand we have developed the BOWSS [Business Opportunities With Solar Systems] model, and here I think some kind of ‘water kiosk’ model is possible.

For example, in a Masai village in Africa, it is common that people pay for water – that makes a sustainable operation model. If the people are willing to pay for water, then running costs, a watchman or maintenance cost for the replacement of batteries at end-of-life, can be financed. Phaesun, together with two other companies, and the University of Gent, intend to apply for further funds to develop the product to market maturity.

Until now we have manually produced systems and we are aiming to bring them to the market at a higher number and develop them into serious production.

How do you envisage that product?

FM: It would be a kit with the different components integrated or preassembled.

How much would it cost?

FM: We can’t name a definite price, it is a wide range.

GQ: We have a target price per cubic liter of water, and that is below €5/m3 of water. In euros that means half a cent per liter, which is comparable with other desalination technologies. But we can reach this, it is realistic.

Jonathan is the Founding Editor of pv magazine Australia. Jonathan joined pv magazine in 2011 and became the Editor in Chief in 2014.More articles from Jonathan Gifford
gifford@pv-magazine.com