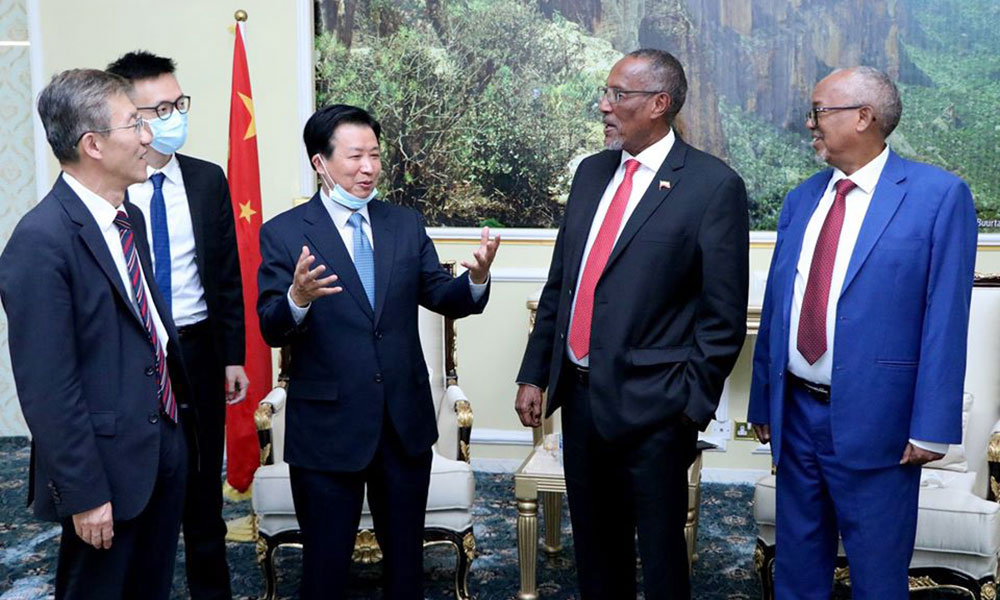 This was part of the discussions during a meeting between the President of the Republic of Somaliland, Muse Bihi Abdi and a delegation led by the Chinese Representative for Africa-China Cooperation (FOCAC), Ambassador. Zhou Yuxiao at the Presidential Palace.

China had intended to use the meeting to forestall the growing diplomatic relations between Somaliland and Taiwan but it is emerging the Somaliland President stood his ground rejecting any proposals to cut ties with Taiwan and added that he is taking steps to strengthen relations with the country.

Somaliland and Taiwan early last month signed an agreement which has seen both countries set up diplomatic embassies in their respective capitals. Taiwan has also proposed to set up a military base in Somaliland. This has not gone down well with China.

During the meeting with Somaliland leadership,  President  Bihi briefed the Chinese delegation on the progress made in the Republic of Somaliland in collaboration with the people and the government, which has led the international community to pay attention and encourage investment in various resources in the country.

It was agreed that the two countries should have a good relationship based on mutual respect and cooperation in the fields of economy, trade and development.

According to political analyst Ahmed J Yassin, the stand taken by Somaliland to maintain her relations with Taiwan amid pressure from China is a testimony of her commitment for pursuing and preserving the democratic values and for the African continent and elsewhere, it is warning shots to reexamine their engagements and dealings with China.

“No doubt that China’s Dollar Diplomacy suffered a devastating blow in a mission tasked to dissuade the Somaliland Republic from going ahead to forge diplomatic ties with Taiwan. For the Somaliland Republic, this is a testimony of her commitment for pursuing and preserving the democratic values, and for the African continent and elsewhere, it is warning shots to reexamine their engagements and dealings with China,” Ahmed J Yassin observed.

He adds: “Since 2016, few countries -The Solomon Islands, the Republic of Kiribati, El Salvador, Panama, Sao Tome and Principe, the Dominican Republic and Burkina Faso – have severed ties with Taiwan, after China waged a well-financed campaign isolating Taiwan diplomatically when the current president, a hardliner for Taiwan’s independence, won the election.”

Taiwan maintains diplomatic relationship with only 14 out of 193 United Nations member states: Belize , Eswatini , Guatemala , Haiti , Honduras , the Marshall Islands , Nauru , Nicaragua, Palau , Paraguay , Saint Kitts and Nevis , Saint Lucia , Saint Vincent and the Grenadines and Tuvalu . These countries are either small Island countries with tiny populations mainly in the Pacific or Atlantic oceans or others in Latin America, all of which are far from the most crucial maritime route for global trade and commerce.

According to Yassin, deeply diving into this, China sees this relationship between Taiwan and Somaliland as a move emboldening people’s right to self-determination, and that is what worries her the most – an endeavour that is so dear to both the people in Somaliland and Taiwan.