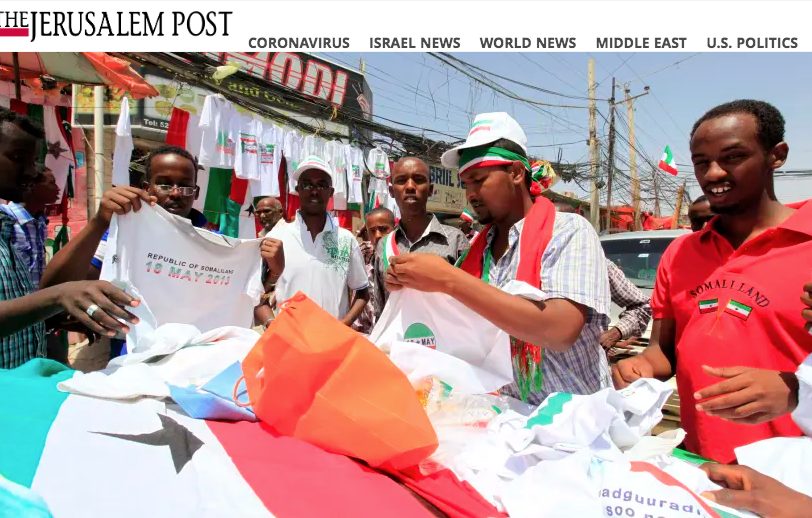 With the changes in the geopolitical context of the region, knitting together Israel, the UAE, Greece, Cyprus and Egypt in a network of shared interests, Somaliland could be an important region.

Somaliland, a small country on the southern short of the Gulf of Aden that declared independence in the 1990s and is generally viewed as part of Somalia, is an example of an emerging stable region with economic potential and strategic significance in the Horn of Africa. Based on recent conversations with those knowledgeable about the area, the Covid-19 crisis and recent developments in relations between Israel and the United Arab Emirates present an opportunity to look at Somaliland and its region as a place that Jerusalem and the Middle East should pay more interest in.

In 1991 the government of Somalia collapsed with the fall of the dictator Siad Barre. This came in the context of the collapse of the Soviet Union and challenges to various states whose authoritarian regimes had been linked to the Soviet Union. Barre had come to power in a 1969 military coup. Somaliland, which forms the northern third of Somalia, was historically an independent area. Previously under a British protectorate, it was briefly independent in 1960 before joining greater Somalia.

Today the area is once again independent but is largely unrecognized by the international community. In this it joins other areas like Northern Cyprus that function as quasi-states, but are not recognized. Increasingly Somaliland has important relations with the UAE. The region has one of the longest runways in Africa, a legacy of the Soviet era, and its Berbera port is strategic and has investment from the Emirates. “The only thing we are missing is recognition,” a Somaliland insider says.

Somaliland has good relations with neighboring Djibouti, which is the center of a French naval base and also US military assets, and it has representatives in a number of countries. Its coast guard, important due to piracy in neighboring waters, has been trained by the UK. Currently the Horn of Africa countries are seeing increased competition by global powers for influence. Turkey is building a large base in Somalia and China is investing in ports. As such, Somaliland is of strategic importance. It is an area that has faced down extremists who have sway in neighboring Somalia, and it has been stable for decades, locals say.

Is Israel a place that Somaliland could look to now? Israel’s Prime Minister Benjamin Netanyahu met with Sudan’s leader earlier this year and he has reached out to Chad. After the UAE places like Somaliland could be of importance to Israel and have shared interests. “We have no problem with Israel,” says one Somaliland resident interviewed for this piece.

Somaliland has a role to play in stability in the Horn of Africa. Across the sea from the country is Yemen where a brutal civil war is raging. Countries such as the UAE have interests in Socotra island which is off the coast of Somalia and Yemen. There are concerns about Iranian weapons smuggling to the Houthi rebels in Yemen. The US navy has stopped three shipments to Yemen in the last year. In addition US Africa Command needs stable places like Somaliland because the US is increasingly trying to use drones against extremists in neighboring Somalia and across the Sahel. France is fighting against rising extremism that plagues Mali and other states. Nigeria, and Niger, suffer the same scourge. However, Somaliland looks to be an anchor of stability on one end of the Sahel, with Senegal at the other end in west Africa.

Somaliland is 99 percent Muslim and locals say that most residents are moderate and follow the Shafi’I school of Islamic law. They were threatened since the 1970s with rising extremism in neighboring countries. However they have kept the radicals out, they say. You can fly to Somaliland via Ethiopia. The country is also a pioneer in a cashless economy using phone chips, uploaded with virtual cash, to pay for things. The country has been successful against Covid, according to interviews. After a 45-day lockdown and quarantines for some travelers, it says it has low rates of the disease.

The region’s economy is based on livestock, some of which is exported to Saudi Arabia. Hargeisa, the capital with a population of 1.9 million, is more developed than the rest of the country. English and Arabic are the dominant second languages for most people.

With the changes in the geopolitical context of the region, knitting together Israel, the UAE, Greece, Cyprus and Egypt in a more closer network of shared interests, Somaliland could be an important region for this shared group of countries. Because it has kept extremism away and also plays an important role in the Horn of Africa across from Yemen, it is of growing importance to countries on the Indian ocean and across the Middle East.