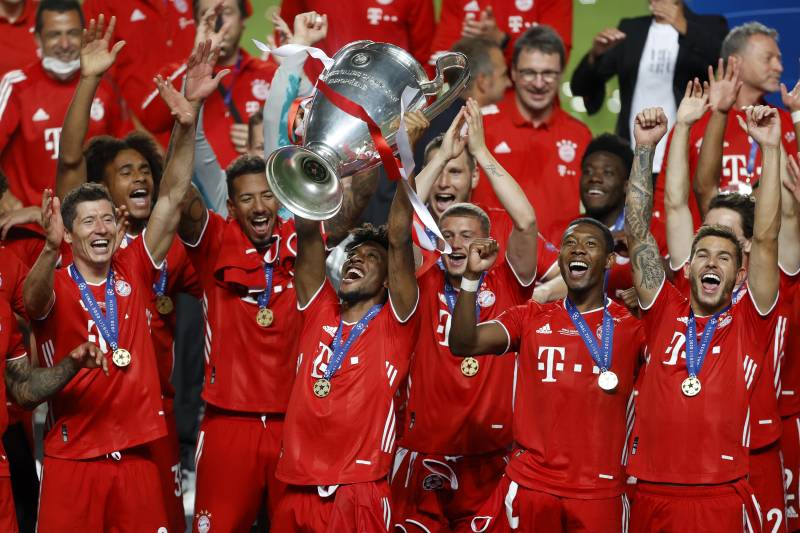 The performance in a 1-0 victory on the night was hardly vintage, but then, finals are a different animal entirely. You do what’s required to get over the line; how often does a team really play up to its full potential and win the trophy, anyway?

Well, Bleacher Report has put that question to the test and attempted to answer it. We’ve taken the last 20 Champions League final-winning performances and ranked them in order of how good they were.

Defining a good performance is a tricky thing—one person’s definition could and perhaps should differ from another—so we’ve tried to distil it, simply, to this: How controlling or dominant was the winning team’s performance? Did they feel like masters of their own destiny during the final?

Bear that in mind as you flick through, and you’ll notice a pattern. Lucky victories, remarkable comebacks and penalty-shootout wins feature toward the bottom; tight games edged by one side make up the middle; and commanding, powerful showings make up the top order.

Chelsea fans won’t care at all, but this was one of the least convincing final performances in history.

They scrabbled and scrapped all game long, putting out fire after fire and never, ever feeling in control. They faced 35 shots and 20 corners in total, cleared one off the line and saved a penalty as they crawled to a shootout, which they won.

Heroic? Undoubtedly. But it was hard to escape the feeling Bayern had been robbed that night.

A redemptive result for Milan, who had lost to the same opponent two years before in shocking fashion, but hardly a redemptive performance.

Liverpool felt the stronger, more composed side for much of the game but fell behind to a horribly unfortunate, deflected effort in the first half and toiled to no avail to draw level. Filippo Inzaghi scored his second in the 82nd minute (this one was a fine goal), and Dirk Kuyt’s strike just before stoppage time could not spark a comeback.

Basically the reverse of 2007.

A vintage final no doubt, but not a vintage final performance from Liverpool, who spent the entire first half in the clouds and conceded three. By the half-time whistle, they looked done.

The second-half comeback is famous, laudable, epic, and the fact they scrapped their way back to level-pegging is remarkable. They then handed the initiative back to Milan and suffered some more, eventually winning on penalties.

This was an incredible match, the play flowing from end to end relentlessly. Looking back at the speed of play and the chances created, it’s a wonder we only saw two goals in 120 minutes.

United’s performance ranks low on this list because Chelsea were such good opponents, the game so even, and at no point were either of the sides close to gaining “control.” In fact, the penalty shootout was in the Blues’ hands as John Terry stepped up; score, and they win.

He slipped, swinging momentum back to United, and they took advantage.

A game of penalties, really.

Three were awarded (two scored) in normal time as the sides couldn’t be split, so it went to a shootout that— somewhat predictably at the top—the German side won.

The game featured an eye-popping cast of names—Gaizka Mendieta, Pablo Aimar, Owen Hargreaves, Giovane Elber and Bixente Lizarazu to name a selection—and they combined to trade blows and seesaw in momentum in a testy final.

A game in which, to be brutally honest, not that much happened.

A couple of woodwork hits aside, the defining memory of this game is that cagey second half in which both sides closed up, and even when Milan lost Roque Junior to injury and had to play the last 10 minutes with 10 men, Juve didn’t force the issue.

It ranks low because Milan never felt the assertive force in this match, though you could argue they weren’t in too much danger of it slipping away from them, either.

Madrid left it about as late as you can to equalise against Atletico in 2014, with Sergio Ramos’ bullet header from a corner forcing extra time—and forcing opponents’ knees to sink to the floor.

They’d beavered away against Los Colchoneros’ elite defensive group for 90 minutes, dragging shots wide, high and placing them in Thibaut Courtois’ arms, but finally one found the net.

It drained Atleti of all their energy, and Madrid went on to score three in extra time in a whirlwind blitz of fitness and execution.

The scoreline looks convincing; the performance over 90 minutes? Not the same story.

Atletico were given a chance to gain revenge on their city rivals Real in 2016, having lost in extra time to them in 2014.

This one went even further, being settled from 12 yards in Real’s favour (again), and Los Blancos were forced to hang on at times and force penalties. Keylor Navas was kept busy, and Antoine Griezmann missed from the spot in normal time; it could have been rather different.

What was expected to be a goalfest turned into a tight, even game settled by a single strike—a Kingsley Coman header at the far post.

Arguing either side “deserved” to win the game on the balance of play might be a little tough, as they tested each other, probed each other and caused problems for each other in seemingly equal measure.

Bayern produced that one moment of execution to win it. That’s how football at the top level goes sometimes.

An all-German final at Wembley Stadium in 2013 was a cracker of a watch, a tight and well-contested affair, but Bayern edged it thanks to a late goal from Arjen Robben.

The stats from the match bear out how close it was—Dortmund managed 12 shots with eight on target, Bayern 14 with nine on target—and this one felt like it could have gone either way heading into the final 10 minutes.

We’ve given a middling ranking to Inter’s win over Bayern in 2010 as it was a fairly even game. Both sides took shots at each other, worked chances and space, but the cutting edge of Diego Milito proved the difference.

He was able to convert his chances in a way Arjen Robben, Halil Altintop and particularly Thomas Muller could not, and that’s why the Nerazzurri were crowned champions. Football really is that simple sometimes.

The first 45 minutes of this tie were controlled by Real Madrid, with Raul Gonzalez stealing in to score straight from a throw-in early on, then Zinedine Zidane scoring a wondrous volley on the stroke of half-time.

At 2-0, it looked dusted, but Leverkusen stepped into the second half with fire in their bellies, forcing some goalkeeping heroics from a young Iker Casillas—subbed on because of injury—in the final 20 minutes.

Los Blancos were relieved to hear the final whistle.

It was a bad final, with the early penalty from Mohamed Salah sucking the life out of the game. A half-injured Harry Kane toiled in an attack that simply did not know how to go about breaking down a steely Liverpool defence, led by Virgil van Dijk and backed up by Alisson.

But in the Reds’ defence, they merely did what was required to win the final. Early goal? Check. Manage the game? Check. Score late to crown it? Check.

It destroyed the viewing experience, but it was a professional, error-free performance that left no doubt as to who was going to win.

This wasn’t the all-conquering performance from FC Porto the scoreline suggests. Monaco were poor, yes, but both sides flattered to deceive at points, with a litany of offside calls breaking up the rhythm of play (30 in total; 19 to Monaco, 11 to Porto). It became tough to watch in spells.

But if we’re ranking performances with dominance and control in mind as important factors, Monaco’s failure to get a single shot on target in 90 minutes counts heavily in the Dragons’ favour; you can’t say they were troubled if their opponent didn’t force a save and constantly got caught offside.

Arsenal goalkeeper Jens Lehmann’s 18th-minute red card shaped this game as an attack vs. defence exercise, with Barcelona naturally dominating play from that point on.

They fell behind to a set-piece goal but didn’t falter in their approach, patiently working chances and—eventually—breaking through in the 76th minute. Another one followed four minutes later, then they played keep-ball for 10 minutes plus stoppage time.

In 2015, we saw the MSN trio—Lionel Messi, Luis Suarez and Neymar—hit its peak rhythm and effectiveness.

They won the treble that season, capping it all off with the Champions League trophy, and they felt much the better team in this final—and quite clearly the best side on the continent, too.

A goal in the fourth minute from Ivan Rakitic set the tone, and although Juventus drew level early in the second half, Barca were the dominant force, and their two goals to seal it felt inevitable.

Fates combined to make this game easier for Madrid than it perhaps should have been, and there’s an argument to suggest that right up until Mohamed Salah went off injured after half an hour, this game was even.

But Salah’s exit sucked the life out of the Reds a bit, and Madrid raised their game. They saw a goal disallowed and Isco hit the bar, but a Loris Karius blunder finally handed them their breakthrough.

On paper, Juventus felt like a decent match for Real Madrid in 2017, but once the two teams had hit the pitch, the match was only ever going one way.

A spectacular Mario Mandzukic overhead kick brought the Old Lady level after Cristiano Ronaldo had given Madrid the lead, but any glimmer of hope the Italian fans had was dealt with pretty harshly after that.

Los Blancos produced a relentless second half that tore through one of the best defences in Europe. The image of Ronaldo and Marco Asensio burning through black-and-white shirts in that iconic purple kit will last for a long time.

“They do mesmerise you with the way they pass it. They’re the best in Europe, no question about that. In my time as a manager, I would say they’re the best team we’ve faced.”

Those are the famous words of Sir Alex Ferguson, speaking after watching his side take a real beating at Wembley at the hands of Barcelona in the 2011 final.

We’d seen the same matchup two years prior end the same way, so this was more or less expected, but it still blew everyone away.

The performance Barcelona put in against Manchester United in 2009 changed how an entire generation of football fans perceived football.

It was both utterly dominant and utterly shocking—where did this come from, given how badly Barca had struggled against Chelsea in the semi-final?—but surprise soon gave way to awe as Xavi, Andres Iniesta and Co. passed their opponents off the park.

To add insult to injury, Lionel Messi scored a header. That’s when you know you’ve been truly bested, all ends up.