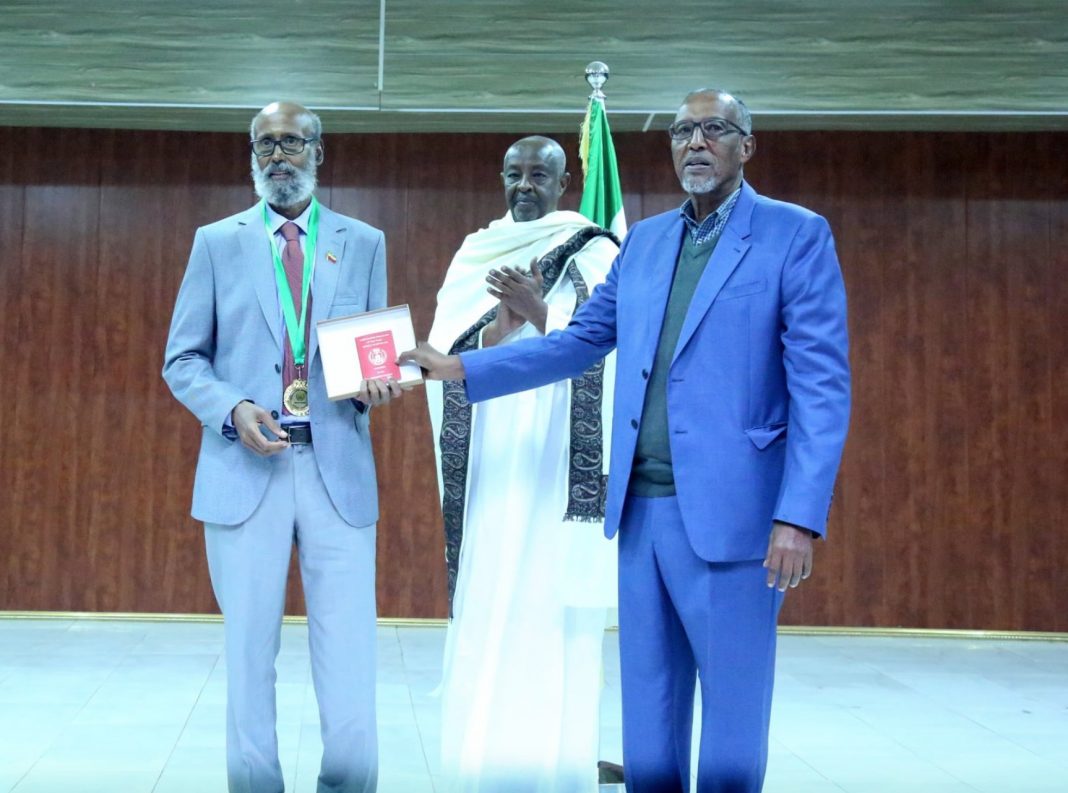 The Republic of Somaliland, Thursday, awarded a Medal of Honor to a conscientious,  ex-Somalia fighter pilot who refused to bombard Somaliland civilians in 1988.

His Excellency the President of the Republic of Somaliland, Musa Bihi Abdi, in a banquet attended by the leaders of the parliament, government ministers, SNM veterans including colonels Ahmed Mirreh and Ibrahim Dhegaweyne, and the mayor of the capital Hargeisa,  received Ex-lieutenant Colonel Ahmed Mohamed Hassan, a.k.a. Ahmed Dheere (Tall Ahmed) at the Presidency last evening. 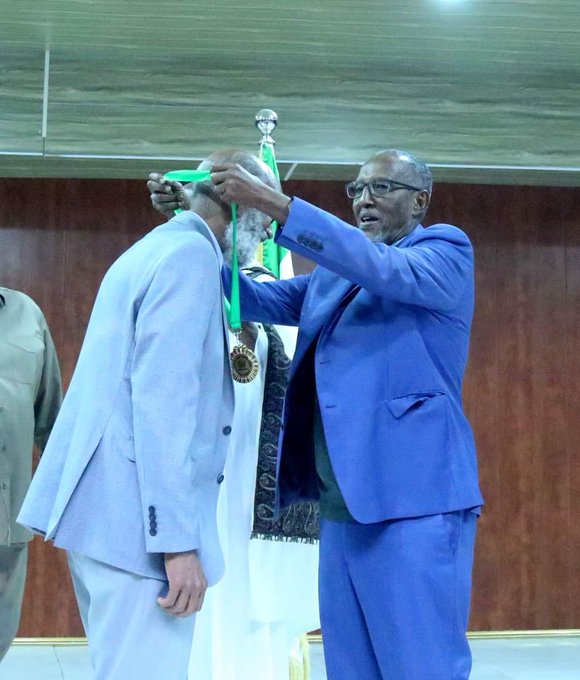 ” Ahmed Mohamed (Ahmeddheere) refused to bombard Hargeisa in 1988 & to massacre innocent people. He sacrificed his life to the people of Somaliland,” the President said, conferring the Honor.

President said the honour came from a thankful public who gratefully remember the lives he saved. 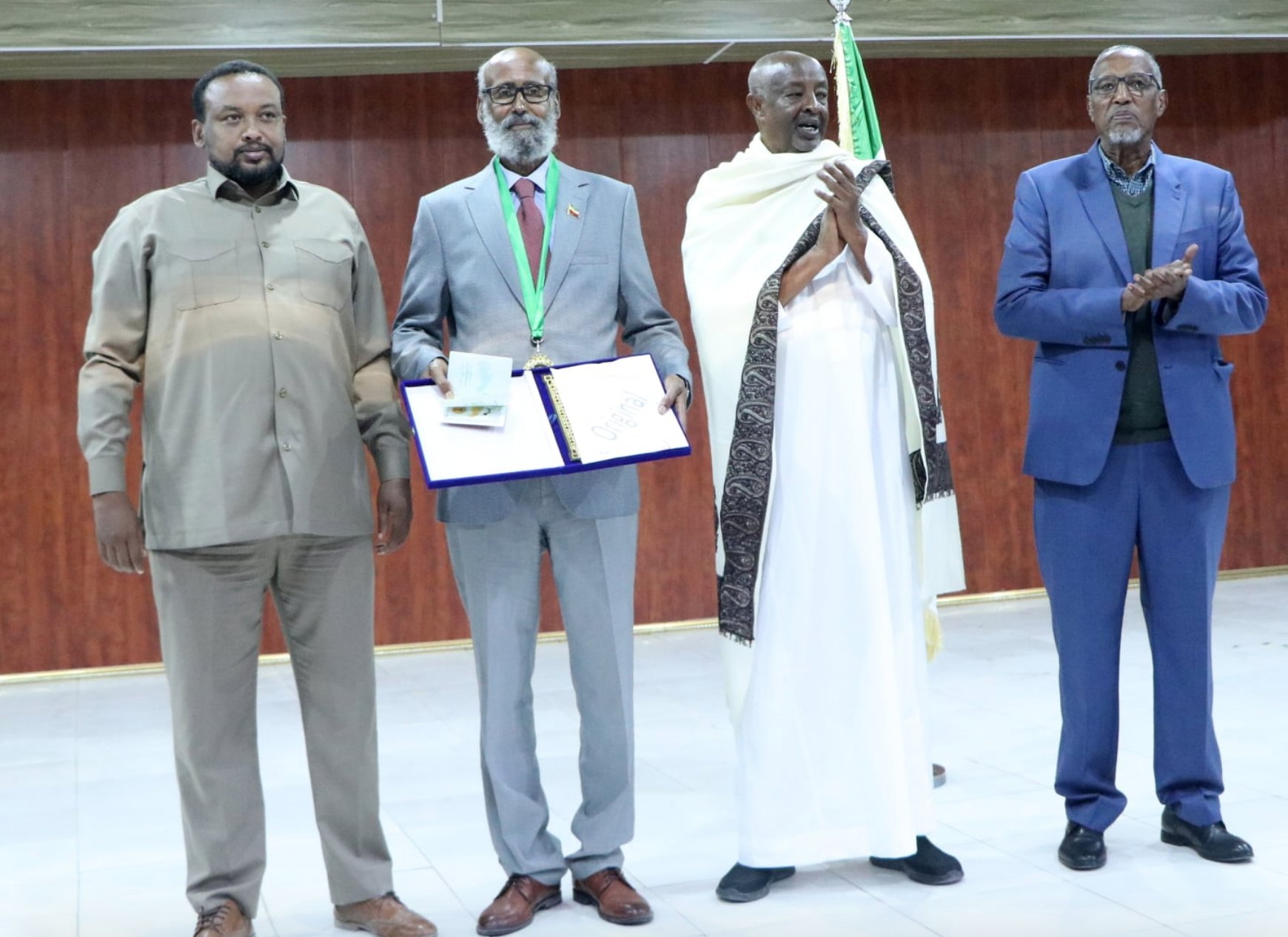 “Hence, on behalf of the Somaliland people, I awarded him the Medal of Honor. Ahmed is a true hero here in the Republic of Somaliland,” President Bihi said.

Ahmed Mohamed (Ahmeddheere) refused to bombard Hargeisa in 1988 & to massacre innocent people. He sacrificed his life to the people of Somaliland. Hence, on behalf of the Somaliland people, I awarded him the Medal of Honor. Ahmed is a true hero here in the Republic of Somaliland. pic.twitter.com/wZv1P2gkvV

Colonel Ahmed Dheere was also awarded a Somaliland diplomatic passport which grants him all the rights of a Somaliland-born citizen.”What happened was an incalculable human catastrophe,” Colonel Ahmed said, remembering the trying times in the ’80s which led him to escape the cruel, inhuman commands of his army commanders and the man who bossed over them, General Mohamed Siyad Barre.

JSL President Bihi's at the Award Ceremony for the man who saved Hargeisa 1988. Finally, after long speech Fighter pilot Ahmed was awarded with Somaliland Diplomatic passport & Highest Medal of Honour of Republic of Somaliland & Construction of luxury villa in Hargeisa City etc.. pic.twitter.com/SkiFn7lJ4Z

He said it was all thanks to the men and women and the thousands who sacrificed their lives to bring the military tyranny to an end.

“We are all thankful, indeed, to the innumerable ranks of men and women who laid their lives on the line to depose the reigning, tyrannical regime,” he said.

Speaking at the occasion the House Speaker of the Lower House of Parliament, the Honourable Bashe Mohamed Farah, expressed why the decision to desert the air force which Colonel Ahmed reached at the time was doubly commendable.

“The pilot-colonel chose to put his life at risk in place of bombarding civilians from the air as ordered,” he said adding “It was remarkable that a man born in Wardhiigley (Mogadishu Burrough) should save Hargeisa”.

“Ahmed did not only save civilians but he also saved his conscience and the accountability he will be saving in the hereafter. He honourably escaped piloting a fighter pilot strafing the very city in which it was base,” Hon. Ahmed-Yassin, Deputy House Speaker stated.

A ten-year-long emancipation battle between the mighty army of Somalia and the Somali National Movement (SNM) to drive the marauding, pillaging military from Somaliland regions to save hundreds of thousands more from summary executions and persecution culminated in the military strongman fleeing Mogadishu in January 1991. His deposal was precipitated by the USC fighters who also started waging a guerilla war against the military junta in the central regions of Somalia in the late ’80s which greatly supported the SNM movement.

Somaliland declared a restoration of its sovereignty on 18 May 1991.

Since then, it had nothing to do with a Somalia governed from Mogadishu’s Villa Somalia which still harbours dreams of re-dominating Somaliland as happened between 1960 and 1991.

To rub salt on the still blistering Somaliland wounds, Somalia leaders keep honoring the very people who were responsible for Somaliland destruction and the loss or injury of more than 200 000 civilians publicly.

Somalilanders believe if not for the UN which led the rest of the world to a myopic, counter-productive stand denying Somaliland and its people the right to restore their internationally-recognized independence of 1960, Somalia would not have been able to usurp its rights or would have blocked its development in any way.