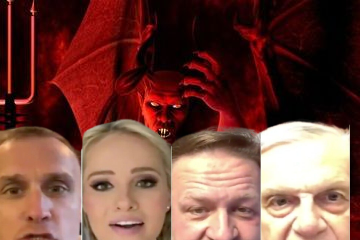 Tomi Lahren, Sebastian Gorka and others tricked into thanking ‘Iblis’ for backing Trump

US representative Ilhan Omar mocked prominent supporters of Donald Trump on Thursday after they were tricked into thanking “Iblis” – a figure analogous to “Satan in Arabic” – for supporting the incumbent president.

“Omg, they are so desperate and gullible. Watch as Trump surrogates thank ‘Iblis’ (Satan’s name in Arabic) for supporting Trump,” wrote the Somali-American congresswoman, who is herself seeking a second term on Tuesday.

The inadvertent insult from the pro-Trump personalities came as a result of the work of comedy writer Ali-Asghar Abedi.

In the video, the Trump loyalists all thanked “Iblis” for his passionate support of President Trump and reminding him to “make American great again”.

Sharing the clip on his Twitter handle, Abedi wrote: “MAGA-heads giving Iblis a shoutout for supporting Trump.  What they don’t realize is that Iblis = Satan in Arabic.”

The video was filmed via Cameo, an app where celebrities can be paid to record personalised messages for people.

This is not the first time that Abedi has tricked Republicans into saying unlikely things.

In August,  falling victim to another prank, Ms Lahren declared that “President Trump is wise like an owl,” in a message to his Indian supporters. The political commentator’s praise, however, quickly took a left turn: “Or as you guys would say in Hindi… wise like an ullu.”

Ms Lahren’s translation of the word owl was spot on, but the 28-year-old seemed to be unaware that the Hindi word “ullu” is often associated with someone who is an idiot or dimwitted.

Other videos that Abedi has shared on his Twitter feed show him getting the anti-immigrant Mr Arpaio to quote the famous “Immigrants, we get the job done” line from “Hamilton”.

Abedi, who has previously written about his pranks in The Independent, said that he had paid Mr Lewandowski and Ms Lahren $80 each to record their messages, and Mr Arpaio $30. Mr Gorka’s fee had been $45, but since Gorka ended up recording the message after the deadline, Abedi said he payed nothing.

“They’re grifters who are stunningly ignorant and have no curiosity,” Abedi told the HuffPost. “I left clues for them. I told them that Iblis was Arab American. If they had a sense of the world beyond MAGA, they’d research what Iblis means in an Arab context. I guess they’re true adherents to capitalism, placing money ahead of their own dignity,” he added.