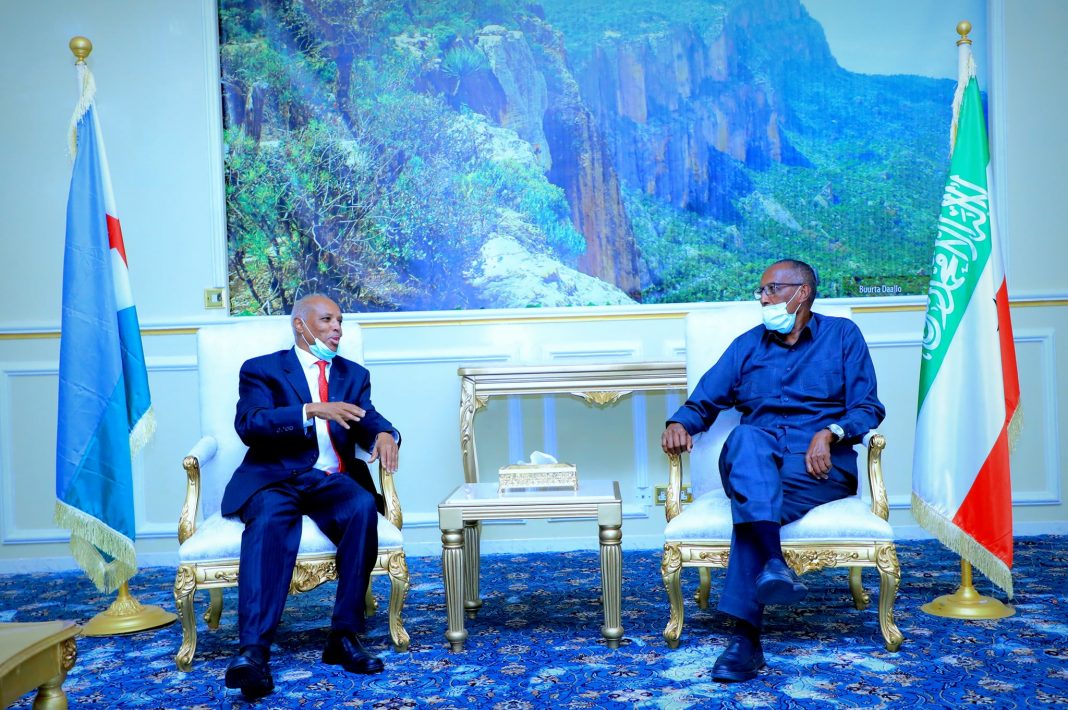 The Minister responsible for all of Water, Agriculture and Fisheries of the Republic of Djibouti, Mohamed Ahmed Awale ‘Mohamed Somali’, is currently on an official visit to the Republic of Somaliland.

His Excellency the President of the Republic of Somaliland, Musa Bihi Abdi, received the honourable minister and the delegation he led at the Presidency, today, Thursday.

In one of the presidency’s usual, skimpy press releases posted at its official Facebook page, it was said the meeting was on strengthening cooperation between the two brotherly nations.

The statement fleetingly mentioned that the President welcomed the delegation and the objective of their visit on bolstering bilateral cooperation.

The Somaliland Minister for Water  Development, Mohamed Musa Derie, however, was more forthcoming.

“We are honoured to start fresh cooperation in the areas of water, livestock, agriculture and fisheries,” he told his partial counterpart.

Minister Derie promised the delegation that they will give them guided tours on key areas of interest during their stay.

“We have come to start an integrated economic and development cooperation with Somaliland which will be led with water followed by agriculture, fisheries and many more,” Minister Awale said.

“I am not into politics. I am a development minister,” he added, not elaborating on why he found such a comment necessary. He might have been aware, commentators pointed out, that his country has done more damage to the Somaliland sovereignty quest than any other African country outside Somaliland’s arch-rival – Somalia.

Djibouti is among a handful of countries that keep a diplomatic-cum-commercial presence in the Republic of Somaliland among whom are, also, the United Kingdom, Turkey, Ethiopia and Ethiopia.

Unofficial sources close to the delegation state that the Djiboutian side was, in fact, looking for investment and development opportunities in Somaliland aiming to outsource privately-owned funds to a country that is more than seven times larger and as bountiful as than itself.

President @IsmailOguelleh of Djibouti sends senior minister for multi ministries, including water & energy, Mohamed Soomaali to Rep. of Somaliland to discuss with Somaliland leadership ways Djibouti can invest in Somaliland & developing towns on both sides the border. pic.twitter.com/3jq60fFoIc

Other sources indicate that the revived interest of Djibouti on Somaliland aims to put a spanner at growing international attention on the unrecognized republic.

Some big-name countries such as Russia and the United Kingdom were said to be eyeing Somaliland’s more than 850-kilometer coastline for possible future naval bases. The United Arab Emirates is the only country that has been granted one in Berbera thus far.

Landlocked Ethiopia, next door, has announced plans for a buildup to its naval strength despite the absence of access to the sea. Ethiopia, observers intimated, might still be harbouring possession of Somaliland’s, underdeveloped but critically important Zeila.

Djibouti has been illegally mining and fishing on Somaliland territorial waters and along its western coastline for some time in the past now. It has also started stamping its influence on nomadic and semi-urban settlements along its border with Somaliland including areas that came under Zeila district by digging wells and promising them much more.

The tiny, over-ambitious country has never concealed its undivided interest and annexation plans for the attractive Sa’adadin islands and Zeila itself with officials crossing over to the latter ore frequently in recent months.

Djibouti has a population of less than a million – much smaller than that of the capital of Somaliland, Hargeisa, alone. The country is one of the tiniest in the African continent at 23,180 SqKm compared to Somaliland’s 176,120SqKm.

Djibouti hosts not less than six foreign military bases and is a victim of its own ambitions which trapped it in one of the most burdensome debts in developing countries. It owed more than US$1.2 billion ( out of an estimated total of 1,401 million dollars) to China alone in 2018 – 47.9% to its GDP. Its GDP per capita stood at US$1840 in the same year although the World Bank puts it at US$3408 this year. The variance is not explained.

President Ismail Omar Guelleh ruled Djibouti since 1999 – termed as one of the longest-reigning dictators in the continent. Four presidents have changed places during the same period in Somaliland.