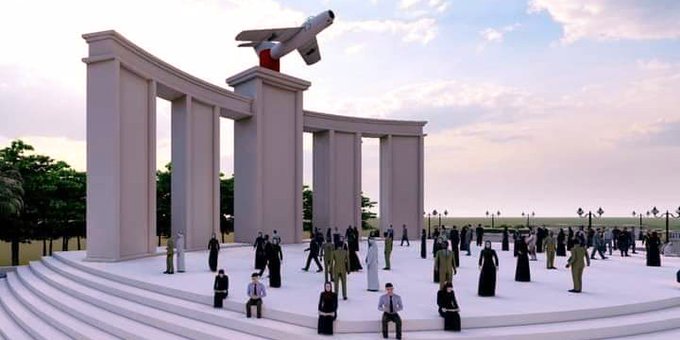 Mayor Abdirahman Mohamoud Aideed ‘Soltelco’ of Hargeisa announced Tuesday that the Hargeisa war memorial monument at the center of the city will be rebuilt to a more appealing standard and architecture.

A MiG fighter – one of the warplanes which flew off and strafed the very city which housed it in 1988 is presently mounted on the obelisk-like monument.

Mayor Soltelco stated that the contract to rebuild the monument has already been awarded and that the construction will start very soon.

He hoped that once the re-construction finishes, the square – facing the under-construction museum – will be a center attraction and recreational space for university students, tourists and visitors of the museum.

Mohamed Ali Bile, the Director-General of the Somaliland Presidency, who spoke at the occasion, revealed that along with the museum the monument will remind all generations of one of the darkest spots in history which Somaliland survived.

Pleased to launch, this morning, construction of a monument at Khayriya Square in #Hargeisa City. The monument represent #Somaliland people's struggle for independence, starting from the Darawiish movement till 1991. pic.twitter.com/ougU3tT00Y

‘Mu’addinka’, particularly underlined how the monument will not be only a remembrance of a painful past but also a source of joy and a testimony to how determination can overcome all seemingly insurmountable odds and might.

The late Mayor of Hargeisa Awl Elmi Abdalla during 2000-2003 built the monument preserving one of the very planes which had caused so much destruction to the city.

Piloted by both Somali and South African pilots, the warplanes strafed everything that moved in and out of the city during the peak of the emancipation struggle for Somaliland in the late 80s.

The then ruling military regime of General Mohamed Siyad Barreh has caused the death or the incapacitation – one way or the other – of more than 200 000 Somaliland citizens and the displacement of more than 300 000 before the SNM fighters helped depose him in 1991.

The Republic of Somaliland, on May 18, 1991, declared that it will never relive again the persecution and domination of 30 years which the legally unconsummated merger with Somalia in 1960 caused its people, avulsing itself from Somalia.

Somaliland has, since then, formed one of the most stable, most democratic, modern states in Africa. To date, it has successfully conducted 6 one-person-one-vote elections – the last of which on a ground-breaking biometric, iris-recognition system.