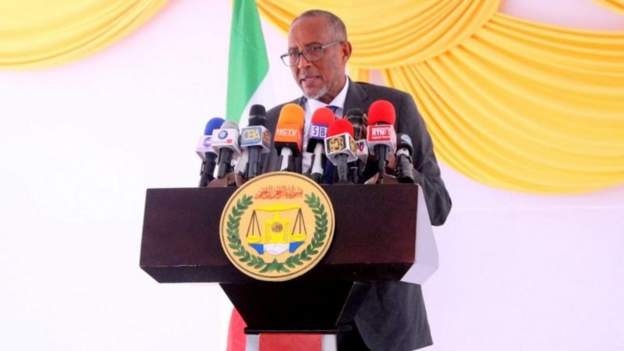 “As Somalis, as neighbors, as the closest kin to one another, only our (political) interests diverged. We are not enemies,” President Musa Bihi of the Republic of Somaliland stated Monday directly addressing Somalia’s Union of Candidates (Presidential hopefuls), the federal president, and federal member states.

Expressing the exasperation of all Somalilanders of a continued ignorance of the Somaliland and Somalia union in a historical context, the President wondered why Somalia politicians far and wide never comprehended the irreparable damage this attitude left with Somalilanders.

“But when you all insist as one that Somaliland MPs are to be elected in Mogadishu you can certainly realize its (negative) weight and the inherent abrogation it connotates. So I ask, why direct such an intentional slight against Somaliland?” he added.

“Worse than you are those Somaliland-born employment-seekers who go along with the make-belief political game who wish to be elected in Mogadishu as Somaliland representatives,” he said.

The President informed both parties – and especially the Somalia-born politicians – that they were only compounding mistakes with intended spurious actions.

“We neither deserve such ignoble treatment. It would only amplify and compound contained enmity and mistrust (between the two peoples),” he said.

President Bihi’s words at the opening of the quality control center in Hargeisa were the nearest that he ever came to a conciliatory tone when addressing Mogadishu-related issues.

Somaliland has gone from leap to leap in governance, stability, and democracy for the past 30 years during which it stood as a restored sovereign state while Somalia was characterized by anarchy, terror reign, and fragmentation which are still the norm to a large extent.

Somaliland in the belief that the three other Somali territories of Djibouti, NFD (Kenya), and Haud and Reserve Area (Ethiopia) will follow suit rushed into a legally unconsummated, unconditional merger with Italian Somalia on 1st July 1960 forfeiting an internationally recognized statehood it acquired on 26 June 1960.

The ill-conceived union ended with the loss of more than 200 000 lives, destruction of cities, and the bombardment and strafing of civilian targets in the hands of a Somalia-led, Somalia-dominated military regime in the 1980s.