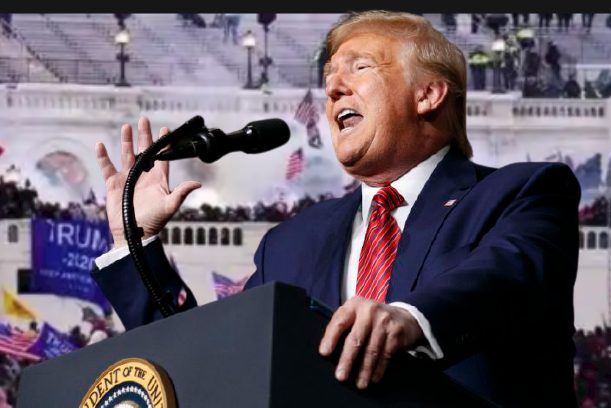 President Donald Trump rejected any responsibility for the deadly storming of the U.S. Capitol by his supporters last week, calling remarks he delivered during a rally outside the White House before the attack “totally appropriate” and warning lawmakers not to impeach him a second time.

Trump on Tuesday said it’s “absolutely ridiculous” that the House is moving rapidly to impeach him for inciting an insurrection, saying the effort is causing “tremendous anger.”

The president defended remarks he made at a rally at the Ellipse that preceded the Jan. 6 Capitol riot.

“People thought that what I said was totally appropriate, and if you look at what other people have said, politicians at a high level, about the riots during the summer, the horrible riots in Portland and Seattle and various other places, that was a real problem, what they said,” Trump said at Joint Base Andrews outside Washington.

The president has been largely silent after social media companies banned him last week from their platforms over concern his posts would incite further violence. He spoke to reporters for the first time since the riot as he departed the White House for Alamo, Texas.

“It’s really a terrible thing they’re doing,” Trump told reporters at the White House, before boarding the presidential helicopter to the airbase. He also said that “Big Tech has made a terrible mistake” in banning him from social media.

“We want no violence, never violence.”

While leaving the White House for a trip to the U.S.-Mexico border, Trump said impeachment plans are causing “tremendous anger” pic.twitter.com/jeu480UTXK

Democrats and several Republicans have decried Trump’s role in inciting a mob that went on to force its way into the Capitol in a chaotic scene that left five people dead.

The House is set to issue a largely futile ultimatum to Vice President Mike Pence on Tuesday, demanding he invoke constitutional authority to remove Trump from office. House Speaker Nancy Pelosi is expected to go through with a vote on a single article of impeachment as soon as Wednesday.

By Justin Sink and Josh Wingrove