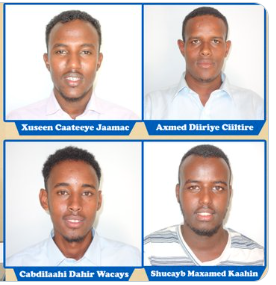 A statement from the Somaliland Online Media Association (SOMA) strongly condemns the government of Somaliland and, particularly, the municipality of Borame for the ‘unjustified detention’ of 4 journalists on Saturday.

Mustafa Mohamed Abdi ‘Jannale’, Chairperson of SOMA, whose office released the statement called the detention unlawful and spurious as it lacked justification of any sort.

“The detention of the journalists on Mayor Suleiman Haddi’s order is illegal, extrajudicial, and totally pointless,” Mustafa said in the statement he signed.

SOMA believed, the statement said, the detention aimed to put a stopper on freedom of expression.

“The arrest and detainment of the journalists have no legal basis. Neither was it conducted through a constitutional process,” the statement added.

“It is obvious,” it continued to say, “that the government of President Bihi has of recent made a habit of rounding up media practitioners without a due process of law. The intimidation, persecution, and internment of practicing journalists have, rather, become the norm of the day,” SOMA said.

harassment, and divisive tactics to bring the vibrancy and independence of the non-governmental media to heel.

All four detained journalists worked for Somaliland-licensed television stations. Abdullahi Dahir Wa’ais worked for SAAB TV, Ahmed Derie for SBC, Shuaib Mohamed Kahin for Bulsho and Hussein Atteye for Universal TV which had just become operational again in Somaliland after it paid a fine of US$15 000 following a six-month closure.

In a related statement, the Somaliland Journalists Association (SOLJA) also strongly condemned the remanded incarceration of the journalists.

Zakarie Ahmed Muhumad, the Chairman, talking to the press Saturday, stated that taking practicing journalists to custody at police stations hurt the budding democracy more than it helped law and order.

Media outlets reported that Mayor Haddi absconded with government funds and crossed over to neighboring Djibouti to evade government audits. Reports added that he abandoned his official car at the border and that both the driver and the car were placed under police custody.

The Mayor came back proving the story false.