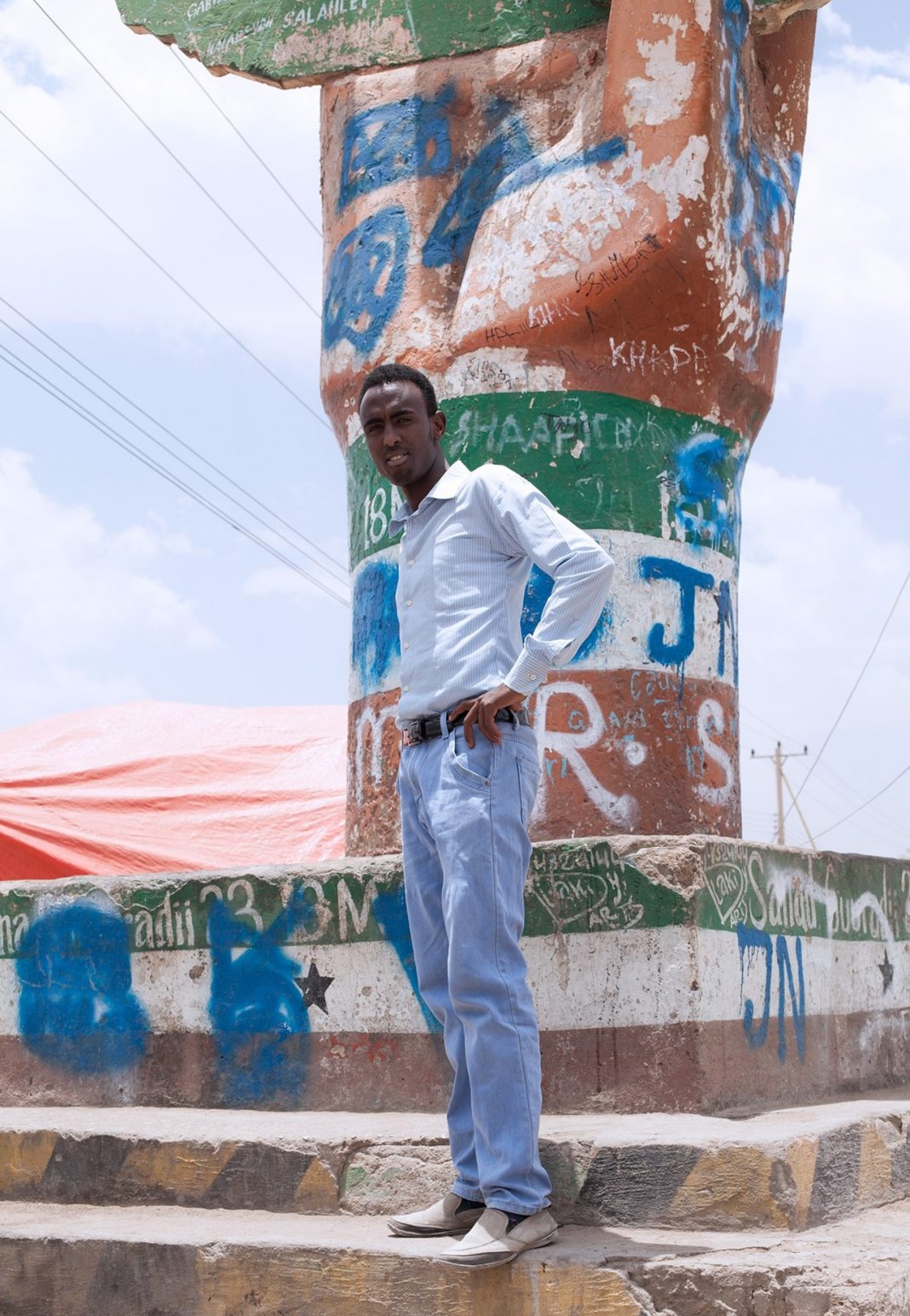 As the Republic of Somaliland celebrates its 30-year anniversary, Sagal Mohammed meets British-Somali photographer and art director Sharmaarke Ali Adan, whose latest project – a photo book and accompanying film – casts an eye on a modern-day Hargeisa

On 18 May 1991, the Republic of Somaliland was birthed as a self-declared independent state, separating from its origins as the northern region of Somalia. The divide was a result of a civil war fuelled by clan factionalism and state collapse in the East African country; a complex conflict that began in the late 1980s and spiralled into anarchy in the 1990s and 2000s, claiming the lives of hundreds of thousands of Somalis while destroying its fundamental infrastructure and heritage. Today, the Republic of Somaliland – previously known as ‘British Somaliland’ following a protectorate established there by the British Empire in 1888 – celebrates its 30-year anniversary, with its capital, Hargeisa, spearheading a long-awaited brighter future for the Horn of Africa.

The city is the inspiration behind British-Somali photographer and art director, Sharmaarke Ali Adan’s latest project, a photo book and accompanying film titled Hargeisa. The book was originally created in 2017 as an end of year project for his photography degree at the University of East London, with a vision of imagining a modern future for Somali youth. “I started this project at a time where I was doing a lot of self-discovery,” Adan tells me. “Growing up in London, not many of us Somalis get to learn much about our history and the depths of our culture. It’s not something my parents sat me down and taught me, so I had to do some self discovery to really learn who I am.”

During the civil war, most of the population in Somalia and the Republic of Somaliland fled the country, seeking refuge in neighbouring East African countries, the Middle East, Europe, America and beyond. There’s a running joke among the diaspora that no matter what corner of the world you’re in, you’ll find a Somali – a reference to the millions that scattered across the globe to escape the destruction happening at home. The war reduced cities like Hargeisa to rubble and wiped away much of Somalia’s historical landmarks, as well as art and culture archives representing Somali tradition and identity. Adan, who was born in the Netherlands and raised in the UK, aimed to rebuild some of what was lost by creating modern representation for the new generation of Somalis. “The idea came from an old family photo album my parents have from Somalia, which is what makes it so special to me. It’s one of my only references to what Somalia used to be and look like so I used it as a focal point when creating the project. Then I began expanding my tools and doing theoretical research on other visuals that helped me put everything together.”

Since the war, the Republic of Somaliland, Hargeisa in particular, has been praised for its ability to function as an independent state and rebuild its capital as a thriving hub, all while yet to be internationally recognised as its own state. Many Somalis have returned to the city over the years to rapidly transform the scars of its past by investing in various businesses, housing and cultural landscape. The city, which is now home to the University of Hargeisa and has its own international airport, has also become a safe haven for diaspora around the world, longing to experience life in their motherland. Adan – whose family are from Somalia’s capital Mogadishu, locally known as Xamar – made his first trip there in 2016, where he witnessed the country’s growth and potential.

His photo book casts an eye on a modern-day Hargeisa, capturing the beauty of the traditional style and mundane routines of its people and their surroundings on analog film cameras. Keen to express the non-contrived realism and character of the city, Adan shot the self-funded project in a makeshift studio in the room of a family house, street casting young Somali boys as models and muses and using traditional Somali menswear to express their authenticity and individualism. “I had just finished touring with Little Dragon [the band] which I got paid for and I had student finance at the time too, so I decided to book a ticket and fly out to Hargeisa, where I have an uncle. I just remember being so fascinated by everything, being in a place where you’re surrounded by your people and your culture is amazing. It was a totally different environment for me. I was watching the way everyone dressed, the way they talked – the accents were new for me because in my family, we speak Af Maay Maay [a specific dialect used by an ethnic group in the South West of Somalia that differs significantly from the Somali dialect used in the Republic of Somaliland].”

“Everyone was so welcoming so it didn’t take long for me to settle in and get to know the history of the city. I’d already done my research on Somaliland and why they wanted independence so I had an understanding of it, but seeing everything first hand and walking through iconic bases within the city really helped me grasp it all and recognise the importance of our ‘daquan’ [meaning ‘culture’ in Somali],” Adan explains. “I had a week of just enjoying my time there, exploring the region, eating the food and meeting locals, it was such a beautiful experience. I then began shooting my project during the second week of my visit.”

Adan has been a photographer in the fashion industry for the past seven years, working with the likes of A-Cold-Wall founder, Samuel Ross, and having his photos featured at art festivals and major editorial publications including Vogue Italia and the New York Times among others. “I was in college when I first got into photography. One of my tutors really encouraged me to pursue a career in it because I enjoyed street photography, so I began transitioning into fashion because my tutor was really into it and I felt inspired,” he recalls. “He kept referencing a lot of iconic photographers but also taught me to maintain my authenticity and do things my own way without letting other influences overtake my own vision. That really stuck with me because when I first started working in the industry back in 2013/14 it wasn’t as diverse as it is today. I think I tried really hard to mimic the vision of white photographers because that’s what I was seeing succeed around me but I just didn’t fit into that world and its aesthetic, it wasn’t me.”

While it is hard to trace Somalia’s pre-civil war art and culture history due to lost archives, Adan sought inspiration from the works of other African creatives. “I began studying African photographers from the 70s and 80s and that’s when I truly felt like I was in my realm. It was the moment my family and my own heritage came into it because I realised I wanted to showcase my people and where we come from through my work.” Hargeisa consists of 32 pages of imagery shot by Adan, with his little brother modelling the cover shot – one of the book’s most striking photos. “I got all of the garments and fabrics I used from a local market in Hargeisa, including this really beautiful and super interesting hat that my brother is wearing in the cover shot. It’s probably the most iconic photo I’ve taken for the book because he looks like a real adeer [a Somali uncle]. We took that photo on the rooftop of a house. Most of the homes in Somaliland have these really cool rooftop areas and I wanted to utilise that to create a makeshift location shoot. It was dope.”

Adan’s project aims to uplift the youth by giving them a sense of pride in their identity – including the colour of their skin. “Despite being in Africa, Eurocentric beauty standards and the idea of equating whiteness to beauty is very much still ingrained in people,” says Adan. “The people you see on Somali TV are mostly Arabs [as an Islamic country, Somalia is heavily influenced by the Middle East] so there’s a real lack of representation for Somali people in their own country. You don’t get to see people that look like you and have the same skin tone as you championed, so when I was shooting with the local boys, a lot of them lacked confidence at first. They didn’t view themselves as beautiful. It took a lot of encouraging and reassuring them with positive words of affirmation before they really felt comfortable in front of the camera.” Like many countries in post-colonial Africa, colourism is a prevailing issue in Somali culture – one that can only be dismantled by projects like Adan’s, that not only showcase but celebrate the essence of Somalis in their natural state. His photo book represents a new era for Somalis, one that young people in the country and the diaspora can look to for empowerment.

Much of Somalia and the Republic of Somaliland’s young diaspora, most of whom are first generation in the Western world, are currently making conscious efforts to retrieve their country’s artistic history, discovering new ways to keep Somali culture alive. Technology and social media has played a monumental role in connecting British, North American and European Somalis to their roots, with platforms like Waaberi Phone, an organisation that champions the revival and development of Somali art, teaching the young diaspora about their culture, language, music and literature through archival content. “There are so many young bright kids in Somalia, all hungry for opportunities. Being in Hargeisa gave me a sense of hope for them,” says Adan. “Somaliland is definitely on track to becoming a place where the youth could thrive. If we, the diaspora, keep investing time and money back home, which I know many Somalis are already doing, particularly in the art world, then the sky’s the limit for us and the future of our country.”

Buy a copy of Hargeisa by Sharmaarke Ali Adan here.