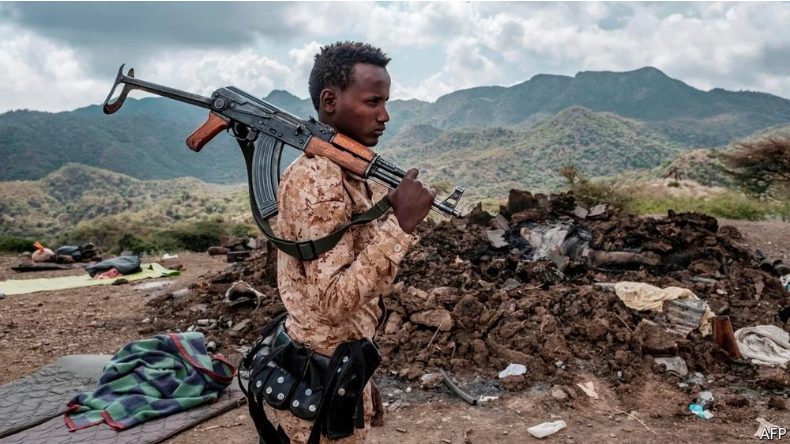 BY SOME RECKONINGS Ethiopia is the oldest independent country in Africa. For a short while, under Prime Minister Abiy Ahmed, it looked as if it might become one of the most democratic. Not anymore. National elections, scheduled for June 21st, no longer herald progress. Abiy, winner of the Nobel Peace Prize in 2019, now draws more international condemnation than praise. For more than six months, his federal government has been engaged in a bitter war against the Tigrayan People’s Liberation Front (TPLF), which until recently controlled the northern state of Tigray and previously dominated national politics. The conflict has fanned tensions among Ethiopia’s 80-plus ethnic groups and taken a frightful human toll. Why has civil war returned to Ethiopia?

The TPLF fired the first shots on November 4th, when its fighters attacked a base housing federal troops—to pre-empt an imminent attack from federal forces and their allies, it argued. In response, Abiy ordered air strikes and sent in ground forces. For the first few months of the conflict, a communications blackout made it difficult to know what was happening. Gradually the scale of the horror has emerged. Atrocities have been committed by all sides. Thousands of civilians are thought to have been killed, and millions more have been displaced, many over the border to Sudan. The raping of women has been widespread. And hunger has returned to Tigray, the site of a devastating famine in the 1980s. War and the alleged deliberate blocking of food deliveries have driven 350,000 people to the brink of starvation.

Tigrayans make up less than 10% of Ethiopia’s population of around 110m, but the TPLF dominated the coalition of ethnically based parties that ruled Ethiopia from 1991, when the TPLF and its allies overthrew the Marxist dictatorship of Mengistu Haile Mariam. (Eritrea broke away to become an independent country two years later.) The new Ethiopian regime won plaudits for unleashing economic growth, but notoriety for killing and torturing its opponents. Abiy came to power in 2018 on the back of mass protests by the country’s biggest ethnic group (and also his own), the Oromo. At first he released political prisoners, welcomed back exiled political parties and promised free and fair elections. His peace deal with Eritrea, signed in 2018, snared him the Nobel Prize. Since then, however, he has arrested opposition leaders and his security forces have killed protesters. Long before the Tigrayan conflict, ethnic tensions had already driven millions from their homes. When national elections, due originally in August 2020, were postponed indefinitely, ostensibly because of covid-19, the TPLF went ahead with its own regional ballot. Abiy’s government viewed this as an intolerable defiance of federal authority, and responded by slashing funding to Tigray, a move the TPLF said amounted to a declaration of war.

At the heart of the conflict are differences about how Ethiopia should be organised. The TPLF has long argued that Abiy is trying to dilute the federalism that underpins the constitution. They accuse him of trying to undermine the autonomy of Ethiopia’s ten ethnically based states, and of centralising power. Oromo opposition leaders, some of whom are in prison and the rest of whom are boycotting the rescheduled polls, feel similarly. Abiy’s supporters say he is trying to reduce the divisive influence of ethnicity in politics and to build a stronger, more united Ethiopia. From the outset, Abiy has framed the conflict as an operation to restore “rule of law” over a faction that had become too accustomed to power.

Other actors have their own agendas. Eritrea’s president, Issaias Afwerki, has no love for the TPLF—Eritrea lost a bitter war with a TPLF-led Ethiopia between 1998 and 2000. In March, as the reports of atrocities carried out by Eritrean soldiers became harder to ignore, Abiy finally admitted that they were in Tigray. Less shy about their involvement are the Amhara militias, from the state to the south of Tigray. They seized an opportunity to settle a long-running border dispute with their Tigrayan neighbours by annexing swathes of western and southern Tigray earlier this year.

The conflict has already ruined many lives. It may still lead to the balkanisation of Africa’s second-most-populous country and the destabilising of an already fragile region. People who once lived together peacefully, albeit uneasily, now kill one another. Traumatised Tigrayans are renouncing their Ethiopian identities. With no resolution to the conflict in sight and a growing humanitarian catastrophe, the election is hardly likely to solve the country’s deep-rooted problems.