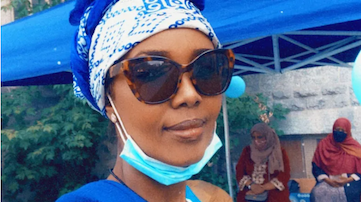 Mayran Kalah acted as an interpreter to help grandmas group share history, knowledge with next generation

Mayran Kalah is a Somali language interpreter and also acts as an essential human channel who connects her Somali community in Winnipeg intergenerationally.

Kalah is part of the Somali community that’s come together to plan and celebrate Somali Heritage Week, which began June 25 and wraps up July 1.

“I feel — I cannot tell you. It’s like I’m intoxicated,” said Kalah. “It’s like we are in Somalia and we’re celebrating.”

Kalah explains that in the Somali language, when you say you’re “going to the grandma group” means going “where the history is.”

With COVID-19 restrictions loosening, the event, which starts at 7 p.m., will also open with a customary smudge ceremony — which is used for medicinal and spiritual purposes and as a purification process to clear one’s mind.

The grandmothers traditionally lead the smudge using uunsi from Somalia — a rare amber essence that’s used as both an incense and perfume. The uunsi is burned with a charcoal tab in a traditional burner called a dabqaad.

Asagwara also made history as the first African Canadian MLA in Manitoba to create a law.

The week of June 25 to July 1 is significant as the week during which Somalia, Somaliland and Djibouti declared independence from three different colonizers.

On June 26, 1960, Somaliland declared independence from Great Britain. Five days later, on July 1, the Trust Territory of Somaliland — which included the capital of Mogadishu and was administered by Italy — united with Somaliland to create the Somali Republic.

And on June 27 in 1977, neighbouring Djibouti declared its independence from France.

“They split up the country and claimed parts of it. Then the residents came together and decided that they would all take the country back,” said Kalah.

Since the COVID-19 pandemic hit, Kalah says the Somali grandmas group realized they wanted to leave their history and knowledge with the next generation. So the community held intergenerational Q&As on June 28 and 29 with grandparents and grandchildren.

But the Canadian children don’t speak the traditional Somali language, which has various dialects, or Arabic — the country’s second official language. And the grandmas don’t understand English.

That’s where Kalah comes in. She’s been a professionally certified Somali interpreter in the community, court and health spheres since 1996 and she speaks every dialect in the Somali language to help bridge gaps.

She’s also a comedian who has appeared at The Woke Comedy Hour and the Winnipeg Comedy Festival, and uses humour to ease communicate in challenging situations.

“Somali Heritage Week gave us the hope that the kids will learn the language and the grandmothers’ dreams came through,” said Kalah.

Orinthia Babb is a reporter with CBC News. She was also an associate producer with CBC Manitoba’s current affairs department. Contact her via email: orinthia.babb@cbc.ca

How Brent Is Tackling Health Inequalities During Covid