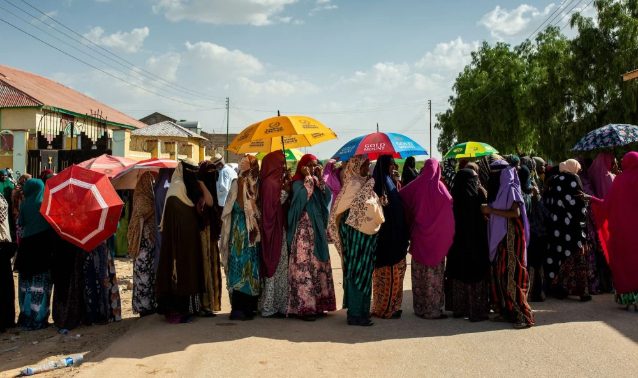 Lacking formal international recognition, the territory is seeking to make its mark through infrastructure deals and bilateral ties with key global powers.

A Case for Statehood

For 30 years, Somaliland has called for its independence as a sovereign nation. Now, as Somalia is gripped by its latest democratic crisis and Somaliland unveiled a new strategically-located container port in Berbera last month, the semi-autonomous region hopes the international community will view its own election and economic potential as a sign it should be allowed to break away.

Local election. On May 31, Somaliland held parliamentary elections, with more than a million people voting. The results were celebrated as a win for democracy when an alliance of two opposition parties gained the majority, giving them the power to run councils and select mayors. The Justice and Welfare Party added its 21 seats to the 31 seats secured by the Somaliland National Party, known locally as Waddani, to oust the ruling Peace, Unity, and Development Party, known as Kulmiye.

Still, none of the 13 women who ran for office were elected, and the election was marred by reports that five opposition candidates were arrested ahead of the vote—not to mention the harassment of journalists. The election itself was also more than a decade late, delayed by a lack of funding and a dispute over the electoral commission’s composition.

“We’re not saying we’re perfect; we’re saying we’re on the right path,” Bashir Goth, head of the Somaliland mission to the United States, told Foreign Policy. “Election is one factor, but there are areas we are doing well—security and other areas—and we hope with international recognition, we will be able to be a very good member of the international community and we will do even better.”

International recognition. A former British colony, Somaliland gained its first taste of independence in 1960, but just months later, the new parliament decided to join the former Italian colony Somalia, in what they hoped would eventually become a federation of Somali states in the Horn of Africa. In a 1961 national referendum, a majority of northern voters in what is today Somaliland rejected unification (and many boycotted the vote), but a majority in the south voted in favor.

Army officers led a rebellion to ensure Somaliland’s independence, but it was ultimately quelled—although tension has remained between the north and south of the Somali Republic. As Somalia devolved into a Marxist dictatorship, Hargeisa, the capital of Somaliland, wanted out. In 1991, Somaliland’s leaders decided to break away, forming a polity with all the trappings of statehood: a currency, a passport, and a president of its own. It also has a national day, each year celebrating its decision to break away with parades, with this year’s 30-year milestone attracting additional fanfare on May 18.

What it never received, however, was recognition as a state. The United States and other Western powers have deferred to the African Union (AU), and the continental body has in turn avoided making a decision. Instead, it has continued to support efforts to stabilize Somalia as a country that includes Somaliland and other provinces attempting to break away: Puntland and Jubaland.

Despite a 2005 fact-finding mission that found Somaliland’s situation to be “unique and self-justified in African political history,” the AU may also be deterred by the history of Eritrea and South Sudan, two countries that became mired in conflict soon after they gained independence. It’s a comparison Goth and others have heard before.

“It’s a valid question, but it’s the wrong analogy. It’s like saying if one African country is not doing good, all African countries are bad,” Goth said. “All the 30 years we have been out of Somalia, we were building our peace, building our institutions, building our democracy. We have all the requirements of a state.”

Building infrastructure. Perhaps most significantly, Somaliland has also built the Berbera Port, opening a new terminal on June 24. Operated by Dubai Ports World, the new terminal increases the Berbera Port’s annual capacity from 150,000 containers to 500,000 containers along a key global trade route for crude oil. It also broadens a trade corridor between Somaliland and landlocked Ethiopia, which also has a large Somali community, and sent a high-level delegation to the opening.

The Berbera project has strengthened ties between Gulf countries and the breakaway state, explains independent journalist Ismail Einashe. Along with Emirati investment, Turkey and Taiwan have also looked to invest in Somaliland. Kenya has considered opening a consulate in Somaliland while Kenya Airways planned to launch a route between Hargeisa and Nairobi, announcing a delay over operation requirements.

“What is shifting is the engagement of regional and international players into the Somaliland situation,” Einashe said. “Somaliland is cementing its reputation as being a haven for democracy in the region, but it’s also increasingly getting the interest, in terms of business and other kind of investments, from countries that feel they no longer have to pay lip service to the Somali government, that are increasingly going out on their own and engaging directly with the government of [Somaliland] President Muse Bihi Abdi and Hargeisa directly.”

Threats from within. For a state with no real recognition in a volatile region, Somaliland’s achievements are commendable. Yet, the very elections Somaliland touts as a sign of sovereignty could also be a threat to its stability, Einashe warned. Although the political elite remain singularly focused on gaining recognition, Somalilanders younger than age 30 have known nothing but this anguished political purgatory.

“When you keep a place like Somaliland in a limbo state for so long, then perhaps there’s a kind of weariness around this democratization process because if it doesn’t deliver independence, why would people continue on that road? There’s always that danger,” Einashe said.