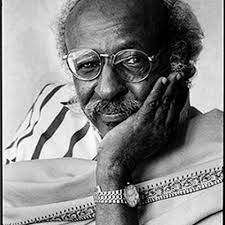 Today, there are increasing warnings from scientists and other scholars specialized in environmental studies about the imminent danger of global warming caused by multiple factors including deforestation, increasing sea levels caused by the melting ice and high concentration of carbon dioxide. As result, we are seeing extreme weather patterns ranging from excessive heatwaves and extreme cold, frequent high-tide flooding and frequent, prolonged drought.

The culprit of all forewarned global environmental crises is none other than man himself. A legend, visionary, scholar and the greatest poet alive, Mohamed Ibrahim Warsame, Hadrawi warned us about the dangerous consequences of our actions and the devastating destruction of our environment. In his poem “ Af-ku Siran” which he explains about faith, environment, coexisting with balanced ecosystem; it is about responsibility, accountability and being a good steward of Mother Nature. He explains the difference between human being and animals on how they treat plants; animals graze and Browns so during the rainy season they could regenerate and blossom, while man the other hand, cuts, burns and uproots the entire forest without replacing and that results in the desertification of a whole region.

In his poem, Hadrawi exactly cites the same concerns explained below by scientists and environmentalists.

“In a society, there are many jobs that help keep things running smoothly. A doctor, mailman, garbage man, waitress, and farmer all play an important role in our society. Similar to a society, species in an ecosystem each have a role in keeping the ecosystem running smoothly. For example, predators keep the population of mice under control, insects pollinate flowers, and worms decompose leaf litter. All species are important and help keep the ecosystem balanced. Ecological balance is a term describing how ecosystems are organized in a state of stability where species coexist with other species and with their environment” (Nappi,(n.d.)).

In one segment of the video he explains a comparison of one same region in two different eras. This place is still known by the name “Libaaxlay”, as the name indicates it was once a dense forest where lions roam. Now, in that same place he explains, let alone lions, even rabbits, could not hide now as result of deforestation and over-grazing. In this poem on how to nurture the environment, he said, “Samaheedu waa iib, ha amaahan teedoo, oogadeeda Waxa yaal, ha ku urursan boobkee, oggolaansho waydi” which means roughly “ If you use it replace it”

The current volunteerism started by the new mayor of Hargeisa Mr. Abdikarim Ahmed Mooge seems to be contagious as it is spreading around in multiple different cities of Somaliland.

This is an excellent initiative, but it must be continued and sustainable in the long term as a new environmental and healthcare solutions. This new volunteerism must also expand into the rural areas and cities planting new flora or plants to reduce water run causing erosion and to enhance the beauty of the cities.

Af-ku Siran is very deep and touches all aspects of life and nature. We are very lucky to have and we salute our legend, Mujaahid, hero, scholar, poet and visionary. May Allah bless him and give him good health.